Vantine’s bid was helped by a weekend of mechanical destruction for his legendary opponent, Larry “Spiderman” McBride. The 22nd Annual Fast by Gast Fall Nationals at Maryland International Raceway served up a track so sticky that McBride was caught off-guard. 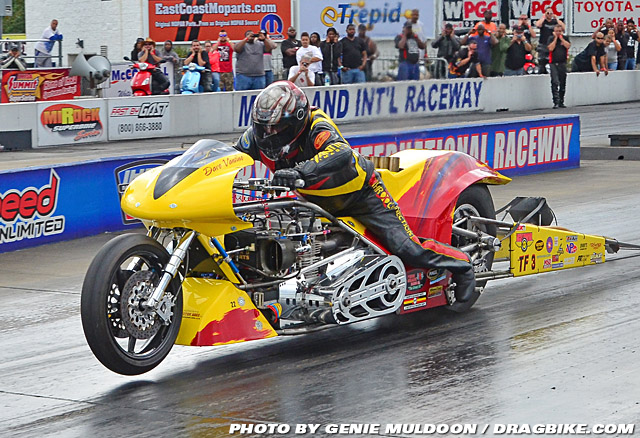 McBride’s carnage started with a broken output shaft on Saturday that had him and crewman Roland Stuart driving back to Newport News, Virginia for a replacement. Then Sunday’s first run sheared all the teeth off of the rear sprocket.

McBride’s final run was marred by a leaking clutch bleeder valve. The big blue bike boiled the tire at the hit, and McBride continued boiling it all the way through the traps while Vantine ran his third straight 5 second pass in the other lane. “I’ve never seen anyone other than me string together three consecutive 5 second passes in one weekend,” noted McBride. “Dave and his crew are doing a great job.”

Nitro-sophomore Vantine had a career weekend with a best of 5.89 at 237 mph on Greg Pollard’s screaming yellow fueler.

Watch all the Top Fuel action and an interview with Vantine :

“Special thanks to Greg and Stephanie Pollard and the team—Joe Taranto, Bob “UB” Smith, Jim Althaus, Genie Muldoon, and the awesome employees of Vantine Imaging whose hard work allows me to come here and do this.”

Vantine and the Pollard Nitrosports team race next at the Manufacturers Cup World Finals at South Georgia Motorsports Park near Valdosta on November 14-16, 2014