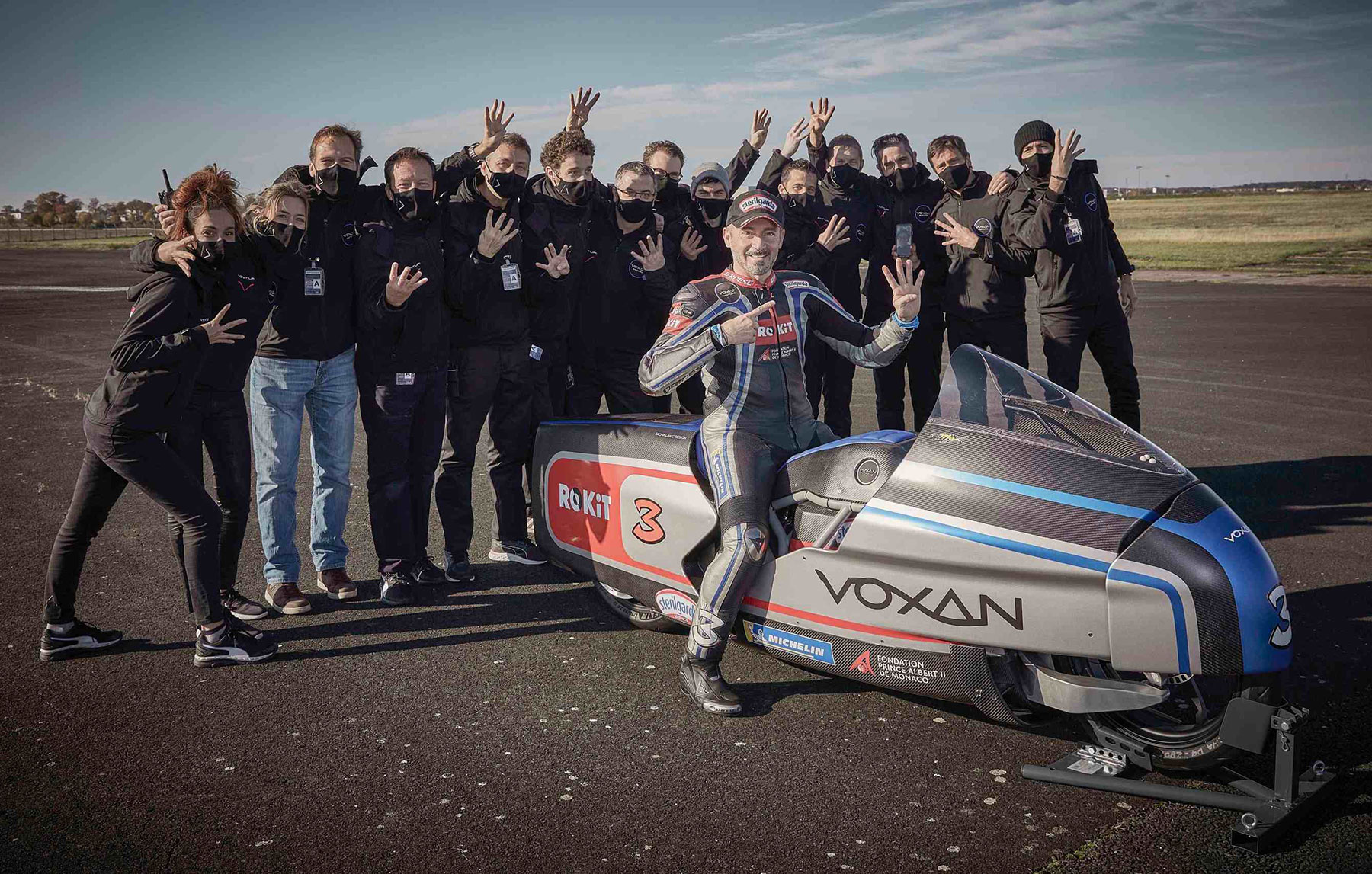 The Fastest Electric Motorcycle In The World

366.94 KM/H (228.05 MPH) FOR THE SEMI-STREAMLINER WATTMAN
On the morning of Saturday 31 October, Max Biaggi and the Voxan Wattman achieved their primary objective, beating the most sought-after of the twelve world records they had been targeting this weekend. With a speed of 366.94 km/h (228.05 mph), the team set a new record in the prestigious “partially streamlined electric motorcycle over 300 kilos” class. In doing so, they dethroned previous holders Ryuji Tsuruta and Mobitec EV-02A with their speed of 329 km/h (204 mph). 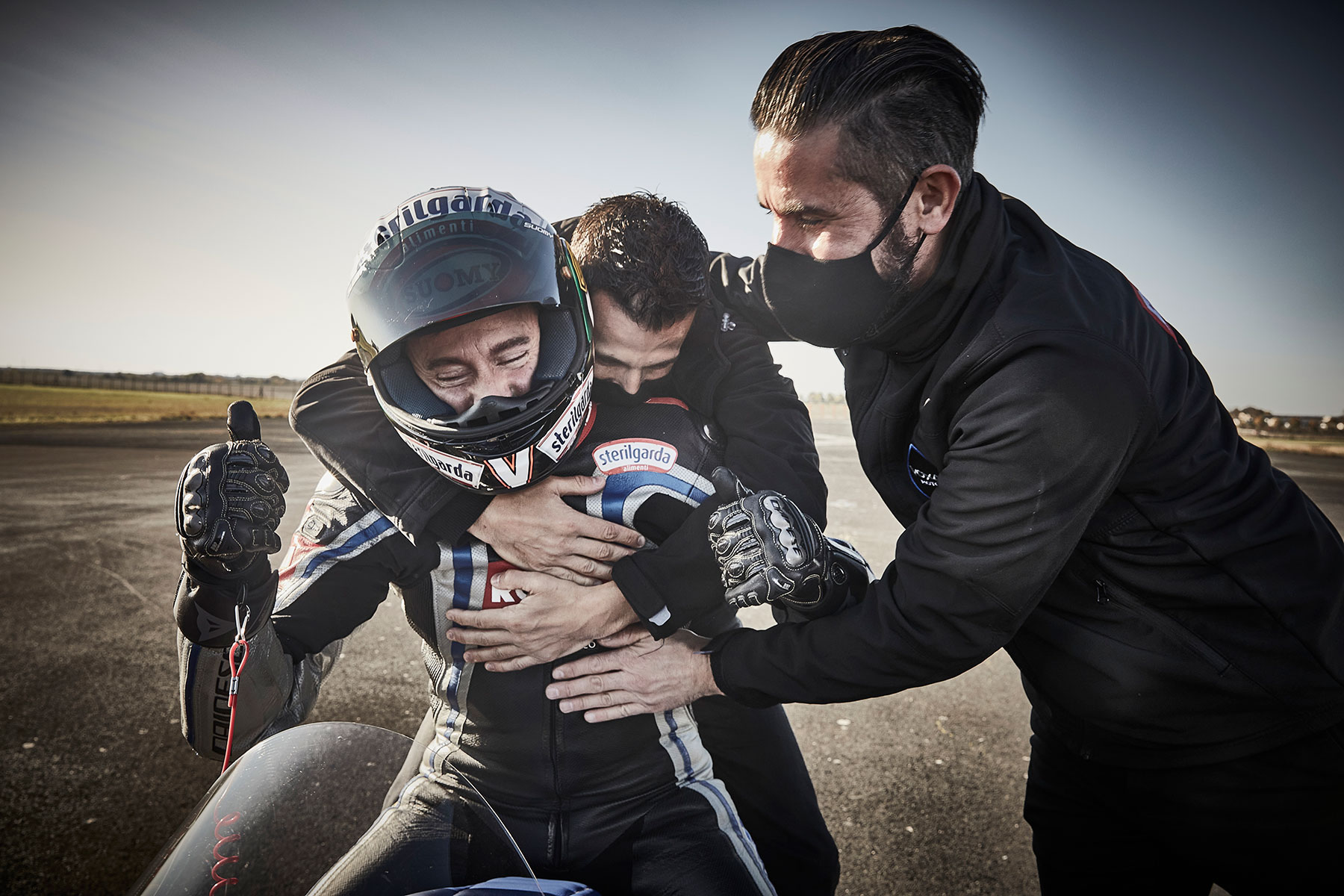 In line with FIM (Fédération Internationale de Motocyclisme) regulations, the Voxan Wattman’s speed was measured from a flying start over 1 mile in opposite directions, within a period of two hours. Under Federation regulations, the final speed is the average of the two speeds recorded over these two runs. The Voxan, with its grey Sacha Lakic-designed fairing, sent records tumbling as the GPS speedometer peaked at an instantaneous speed of… 408 km/h (254 mph).

Given the relatively short track (3.5 km / 2.17 mi), reaching such an impressive top speed has encouraged Voxan to set its sights even higher. When they make their next attempts on a longer course, the team now has serious designs on an average speed in the region of 400 km/h (249 mph).

On Friday 30 October, a non-streamlined version of the Voxan Wattman without its fairing also took on the challenge over a distance of 1 mile, from a flying start. The principle was identical: 1 mile in opposite directions, within a period of two hours. Once again, the final speed was the average of the two speeds recorded over these two runs: 349.38 km/h (217.14 mph).

Yet the on-board systems showed that the Wattman, propelled by its powerful 270 kW (367 CH) engine, peaked at a top speed of 372 km/h (231 mph). This measurement augurs well for the next attempts planned, with Voxan set to take on more records until the end of 2022. 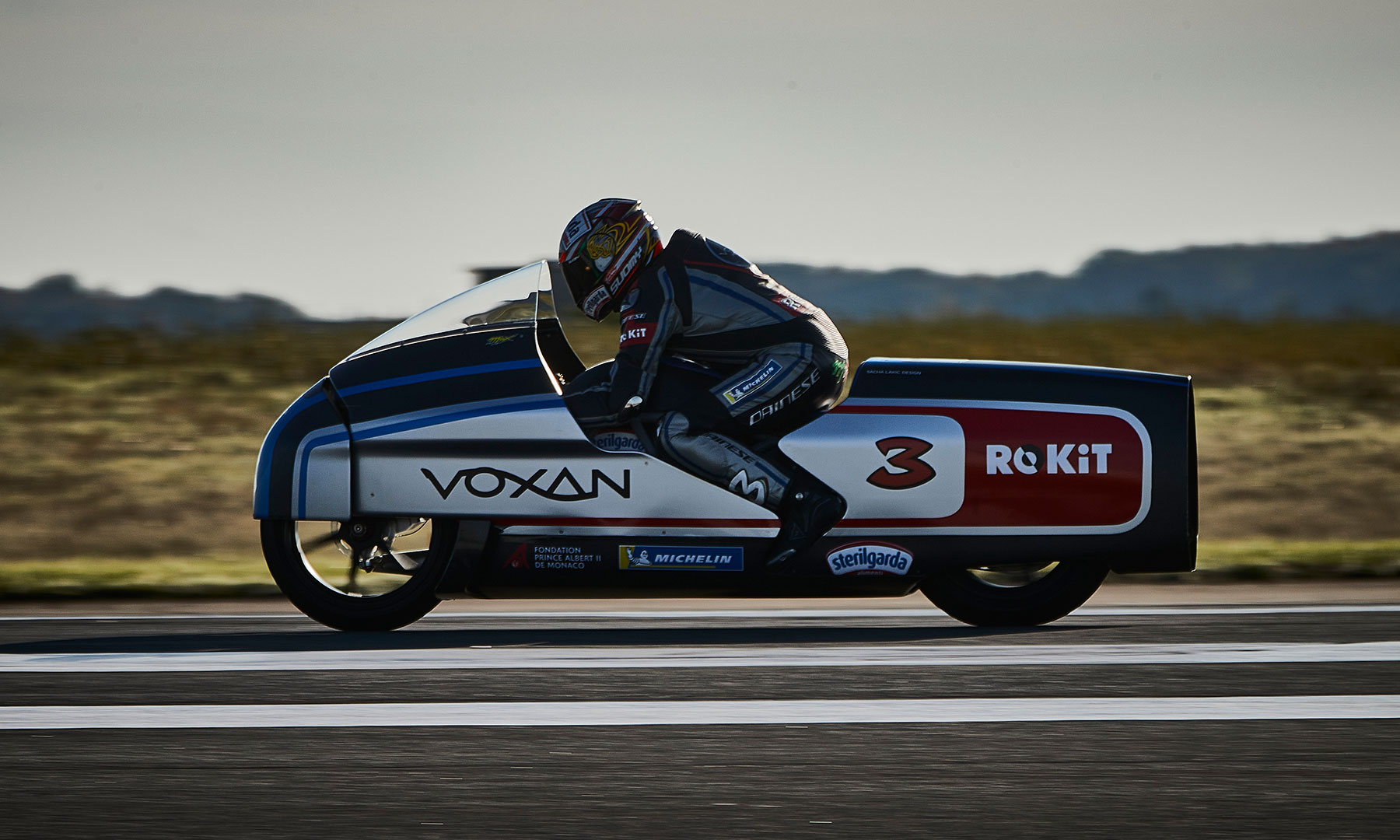 Gildo Pastor’s team had a number of other world records in their sights. After these three days of attempts, the final record tally is as follows: 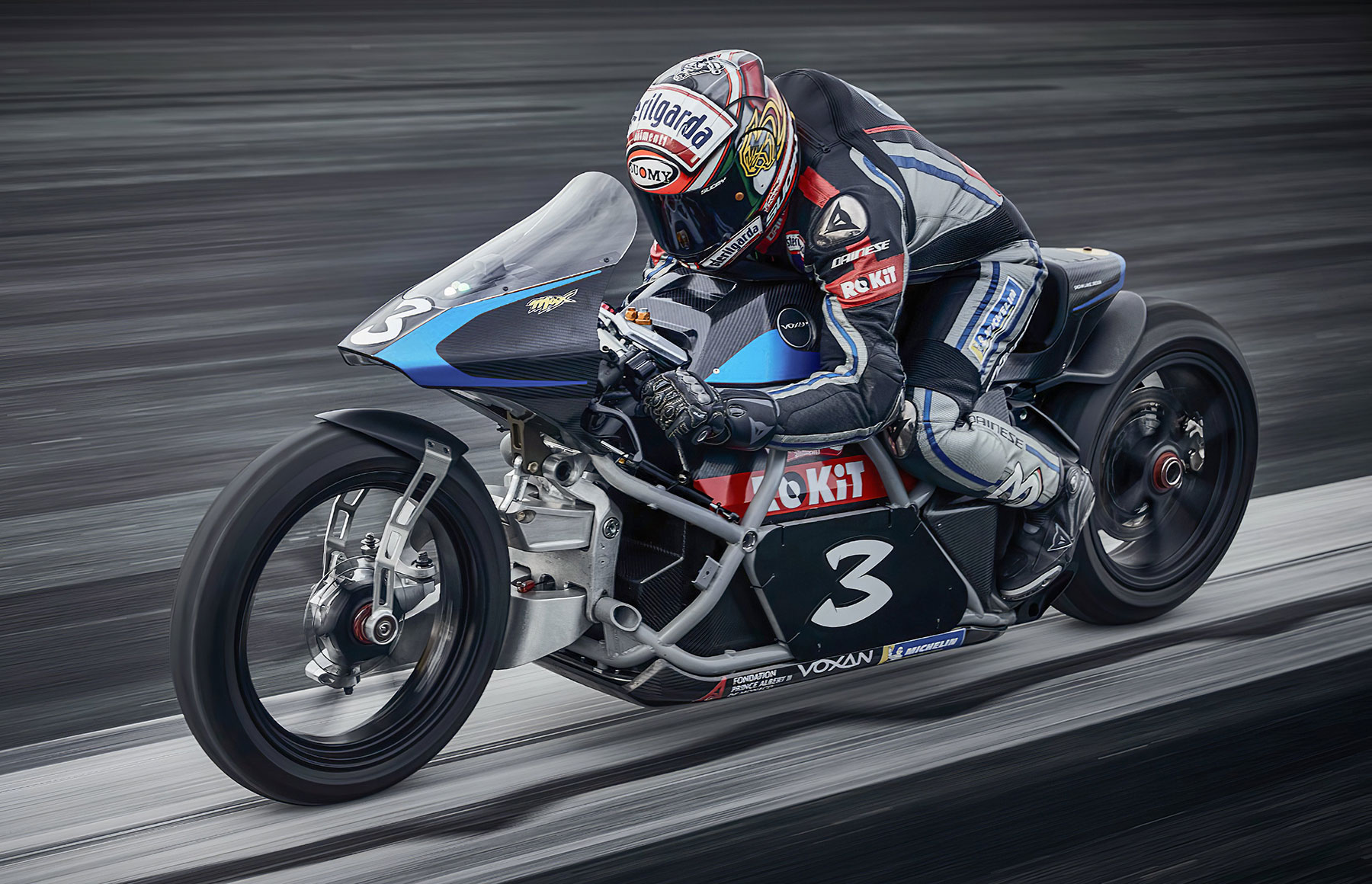 “It was important to me to celebrate the 20th anniversary of the Venturi Group’s electric adventure. Given the health situation, it hasn’t been easy, but thanks to the hard work and mentality shown by Max and my teams, we proved ourselves up to the challenge. Twenty years after buying Venturi, I am delighted that the Group can now claim to have created the fastest ever electric vehicles on two and four wheels (Venturi VBB-3, FIA record: 549 km/h – 341 mph), but also in the four-wheel fuel cell category (Venturi VBB-2, FIA record: 487 km/h – 303 mph). On each project, we have worked openly with major companies to share with them our expertise in the field of ground-breaking technologies, and in doing so contributed to improving ecomobility. That modest contribution reflects my commitment to ensuring we are fully line with the values of the Principality in terms of sustainable development. So I am sharing these records with my country, Monaco.” – Gildo Pastor, President of Venturi 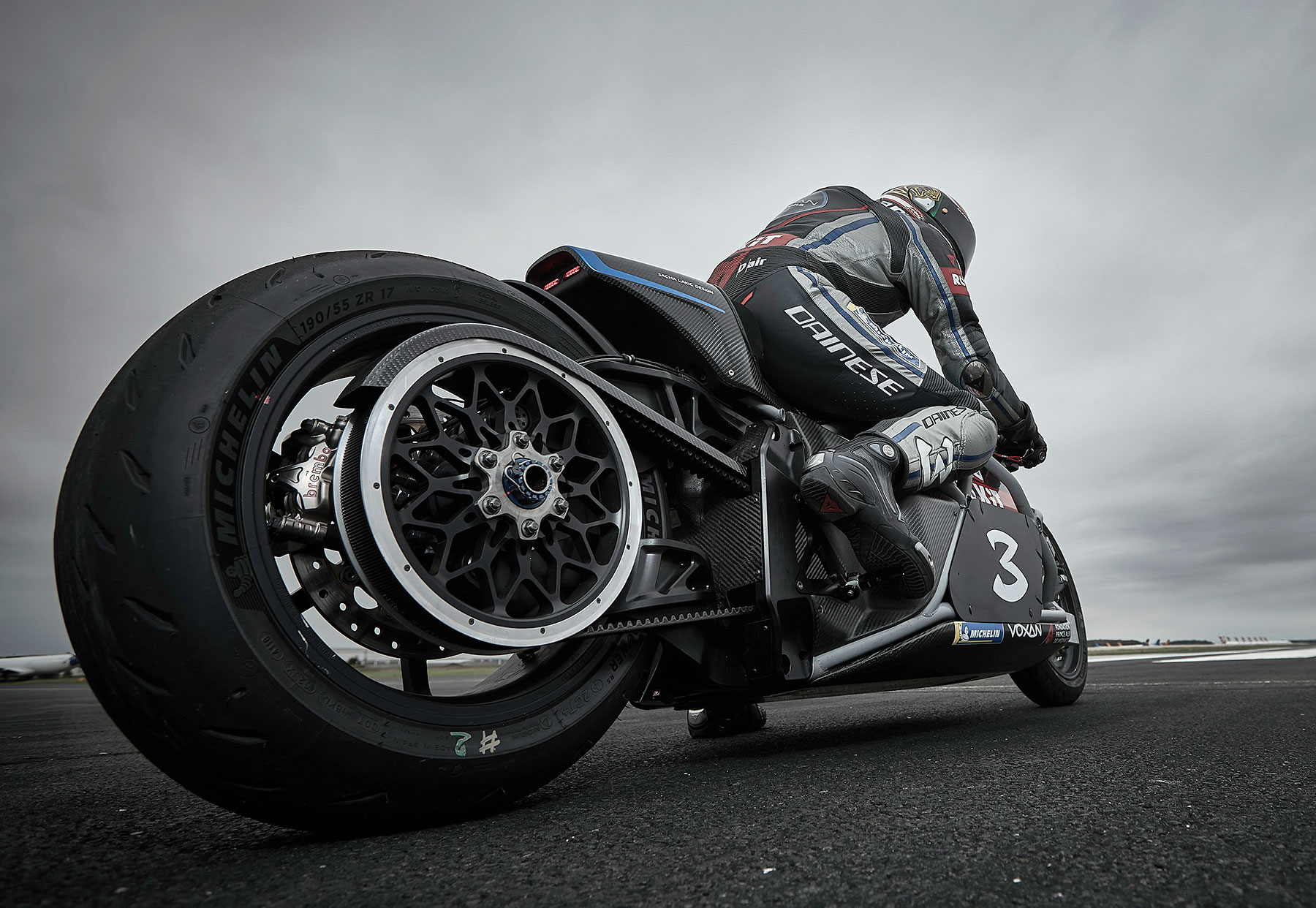 “When Gildo Pastor, the President of the Venturi Group, approached me about this project, I was curious, very motivated, and at the same time a little uncertain. Having said that, right after our first meeting, I quickly realised that, like Gildo, his teams were driven by an incredible belief and determination. They told me “we came close to 600 km/h (373 mph) on four wheels, and now we want to flirt with 400 km/h (249 mph) on two wheels, nothing’s going to stop us!” These records make me a happy man! I’m proud of the team and delighted to bring these titles back to Monaco!” – Max Biaggi, rider of the Voxan Wattman 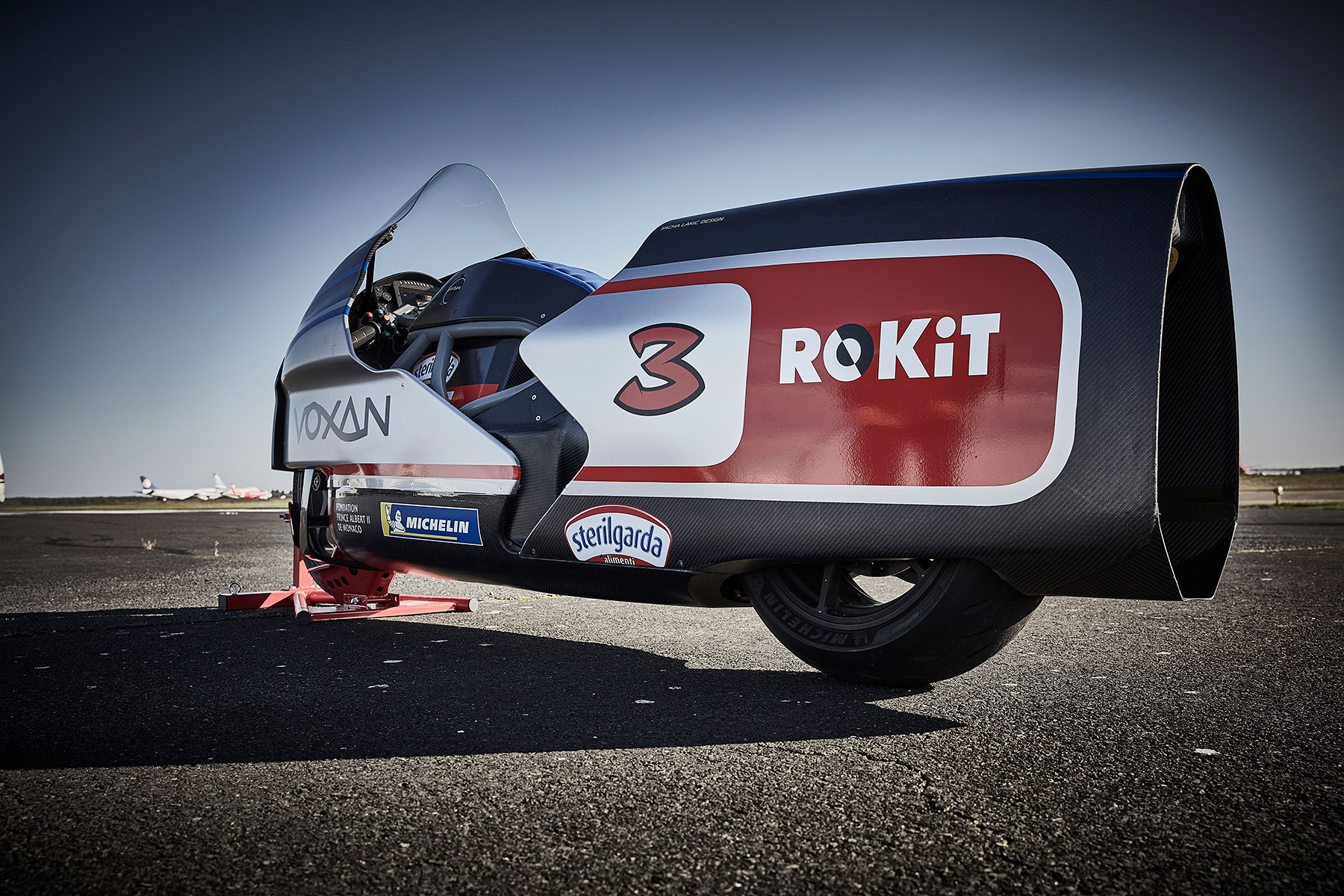 “At ROKiT we believe electric vehicles are the future and we are proud to partner with the fastest electric motorcycles in the world. Venturi and Voxan are true innovators and it’s exciting for ROKiT to be part of history in the making.” – Jonathan Kendrick, Co-Founder and Chairman ROKiT. 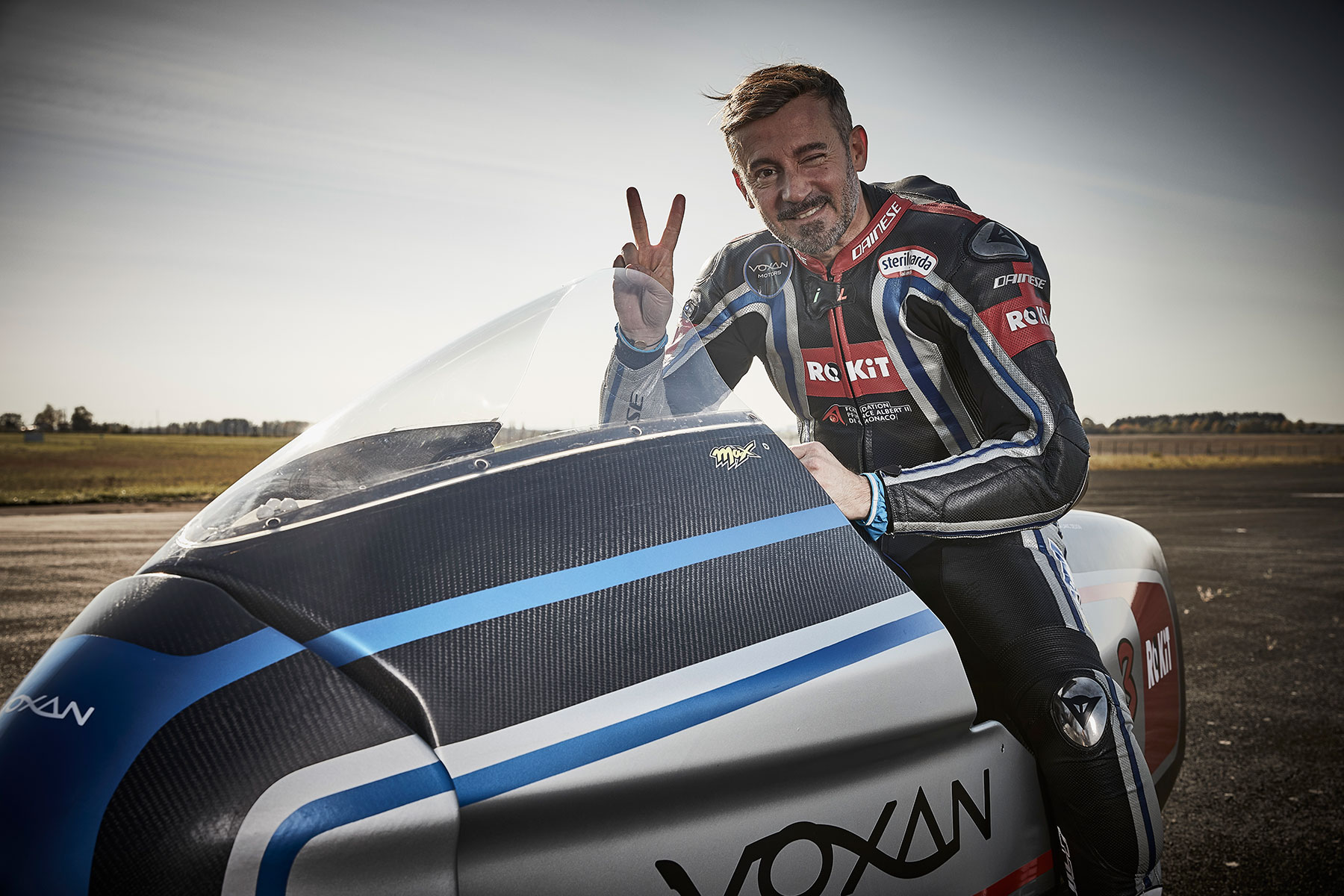 ABOUT VOXAN
In 2010, the iconic motorcycle manufacturer Voxan Motors was bought by Venturi. Its President, Gildo Pastor, immediately refocused the constructor on a new core business: electric engines.

In 2013, Venturi unveiled the Voxan Wattman, a symbol of the brand’s rebirth and its radically new technical direction and styling.

In 2019, the teams began work on a new, high-performance version of the Wattman, specially designed to set new world speed records. Learn more a www.venturi.com