HomeColumnsWhat is a Top Fuel Motorcycle?

What is a Top Fuel Motorcycle?

What is a Top Fuel Motorcycle?

Story and photos by Tom McCarthy

Recently it has come to my attention that there seems to be a heightened interest in Top Fuel motorcycles. This is a good thing; any attention in the various classes of motorcycle drag racing which sheds light on the classes or one class in particular, can only serve to bring attention to the sport and of course the class of focus. In as much as people of various walks of life have probed the question; “What exactly is a Top Fuel motorcycle” I am compelled to offer up some thoughts on this as the Senior Editor of Dragbike.com.

Please understand the following words are my own and do not directly reflect the opinions or values of any drag racing sanctioning body or specific person, other than myself. I have been around these motorcycles and their creators since 1980 when I got my first whiff of nitromethane when I attended the NMRA race at Epping, NH, that year. I can’t remember if it was Elmer’s double engine nitro Harley “Pure Pork,” or Wayne Davis Kawasaki, or Bo’s Terminal Van Lines bike or the Teson & Bernard bike: but one of them baptized me back then and I’ve not been the same since.

Let me describe for you what it was like in 1980, to see the Terminal Van Lines Top Fuel motorcycle make a pass back then. I remember Bo O’Brochta sitting up on the bike, ready to start, then giving a firm nod, to fire the bike. Dick Wade hit the starter button and this sound like loud angry bees, really big ones, began droning from the motorcycle. Suddenly people moved quickly away from the pulsating monster. Bo rolled it into the water-box, looked to the bike in the other lane and then all hell broke loose.

Bo snapped the throttle to partially open and the bike shot a plume of smoke straight up into the air as four cylinders gave off an ungodly noise that was so loud, it vibrated every cell in my body and that of anyone within 50 yards of the bike. No other motorcycle in the world sounds like a Top Fuel motorcycle.

After the burnout, Bo’s tune-up man, Mike Gray, pushed the bike back to the starting line and they prepared to launch. When the starting line lights flickered-green; the roar from two Top Fuel motorcycles erupted and deafened anyone foolish enough to be anywhere near the starting line. Shortly after they left the line, something truly amazing happened to Bo’s bike. Somewhere near about mid-track, Bo shifted the bike into high gear and it just took off like a Star Wars space-ship: just GONE! I just kind of stood there with my mouth hanging open when I first witnessed this. I was partially deaf, ears-ringing, my eyes were watering from the nitromethane fumes and I didn’t quite know what to do after seeing that. I couldn’t quite comprehend what I’d just seen, I’d never seen anything like that before and I didn’t know what the hell that was, but I know I liked it – a LOT! This was my first experience in the presence of a Top Fuel motorcycle.

Now let’s compare this to a newcomer to motorcycle drag racing and her first reaction to experiencing a Top Fuel bike run. We now fast forward to the year 2012; I was at the April “Spring Cup” event for the Man Cup sanction and I brought my new lady with me and she found herself in the presence of Top Fuel motorcycles for the first time. Her response was a classic first-time experience to seeing a Top Fuel motorcycle perform in person. I brought her to the base of the South Georgia Motorsports Park tower, to the grassy area, to let her watch a Top Fuel bike run for the very first time.

As fate would have it, she watched as Chris Hand’s bike, the Red Neck Express was warmed up, she was standing right beside me, we are about 5 to 7 feet from the bike, she has ear-muffs on and is holding them firmly against her head. Chris’s bike comes up to temperature and he starts to roll forward into the water box. Then Chris does his signature rolling-thunder burnout, well past the starting line. As soon as Chris hit the throttle, my beloved did an abrupt about-face, bent forward at the waist and RAN to the tower to get away from that thundering “thing” that just roared past us. I still smile when I think about it. We had to leave the track early that day, before the next round of qualifying for T/F bike. (Note: this was the only time I ever let that happen.)

I could get technical here and site rules and regulations about engine types and what constitutes “Fuel” or induction specifics, but none of these things even begin to come close to describing what a Top Fuel motorcycle is or is not. Truth be told, a Top Fuel motorcycle is a two-wheeled machine that assaults the senses with sensory overload to every aspect of the human form: from the visual to the olfactory receptors and let me be clear about this, even with the best in hearing protection – you’re going to receive a beating you’ll never forget.

No other class of motorcycle racing is as extreme, or as exciting as Top Fuel motorcycle drag racing. The typical Top Fuel bike will go from stationary to 100 MPH in 1.25 seconds if it’s set-up for a five-second elapsed time run. In fact, the motorcycle will be doing in excess of 200 MPH before the first half of the race course is used up. No other competition class of drag bike can boast a top speed of over 258MPH as a class record. None.

To say that Top Fuel motorcycles are impressive is like saying the ocean has some water in it. The statement is true in essence, but it doesn’t even begin to describe the immensity of what lies beyond the witnessed vision. Top Fuel motorcycles are the most expensive machines to build, maintain and the most dangerous motorcycles to compete with. A Top Fuel motorcycle drag racing pilot has to put on a blast vest before zipping up their leather protective suit. Why? Because lying on a bomb is part of the job. It just comes with the territory as part of racing a Top Fuel bike. It’s no joke, these machines do blow up from time to time and there is no firewall or roll-cage for protection.

Let’s break it down: Top, as in the pinnacle, the apex – the highest of the high. Fuel as in nitromethane: because alcohol is for drinking and gasoline is for washing parts. Top Fuel class drag bikes are the biggest, baddest motorcycles in all of drag racing. They are some of the most extreme racing machines ever built by man. Words alone can hardly do them justice. They are in a class by themselves.

A properly tuned Top Fuel bike can cover 1,320 feet of a well-prepared drag strip in about five and a half seconds at over 250 MPH. They can cover the back-half of the race track in under two-seconds. If everything goes right, elation will follow. If things go wrong, they can go terribly wrong: in the worst way. This is sometimes the price of racing at such a high level.

If you were to ask me, “What is a Top Fuel motorcycle” I’d tell you: It’s a magnificent machine that resembles a complex piece of functional mechanical artwork. It’s very dangerous, malevolent, has a bad attitude, it will kill you if it can. But if you treat it right, if the conditions are there, it’s like being shot out of a canon. It never stops pulling you forward like a catapult, until you shut the fuel off; then you have a matter of seconds to stop it before you run out of race track.

Then the back-breaking work begins, preparing for the next run. Top Fuel motorcycles are easily ten-times the maintenance of any class of drag bike. Top Fuel motorcycles require a team of three to five highly experienced mechanics working long hours on the bike. Thousands of dollars are spent for every pass the bike makes down a ¼ mile drag strip. Now add a fearless drag bike pilot who must posses other-worldly instincts combined with the reflexes of a Cheetah, and you have the basics of a Top Fuel bike team.

Note the word team here. No one and I mean no-one can build, properly maintain and effectively race a Top Fuel motorcycle solo. They are monsters in every way. Larry McBride, the 19-time Top Fuel motorcycle champion from Newport News, Virginia was once asked “What does it take to race a five-second Top Fuel motorcycle?” His immediate answer was “First you have to surround yourself with the right people. You have to have the right talent to do this.”

Top Fuel motorcycles are not something to be taken lightly in any way. Only the very brave and the very bold can race in Top Fuel bike. The six-figure price tag aside, if you have to ask how much to build one or buy one, chances are it’s out of your league. Then again, not many people can handle a 1,000-pound 1,200 horsepower motorcycle, which has something to do with why there are so few of them. 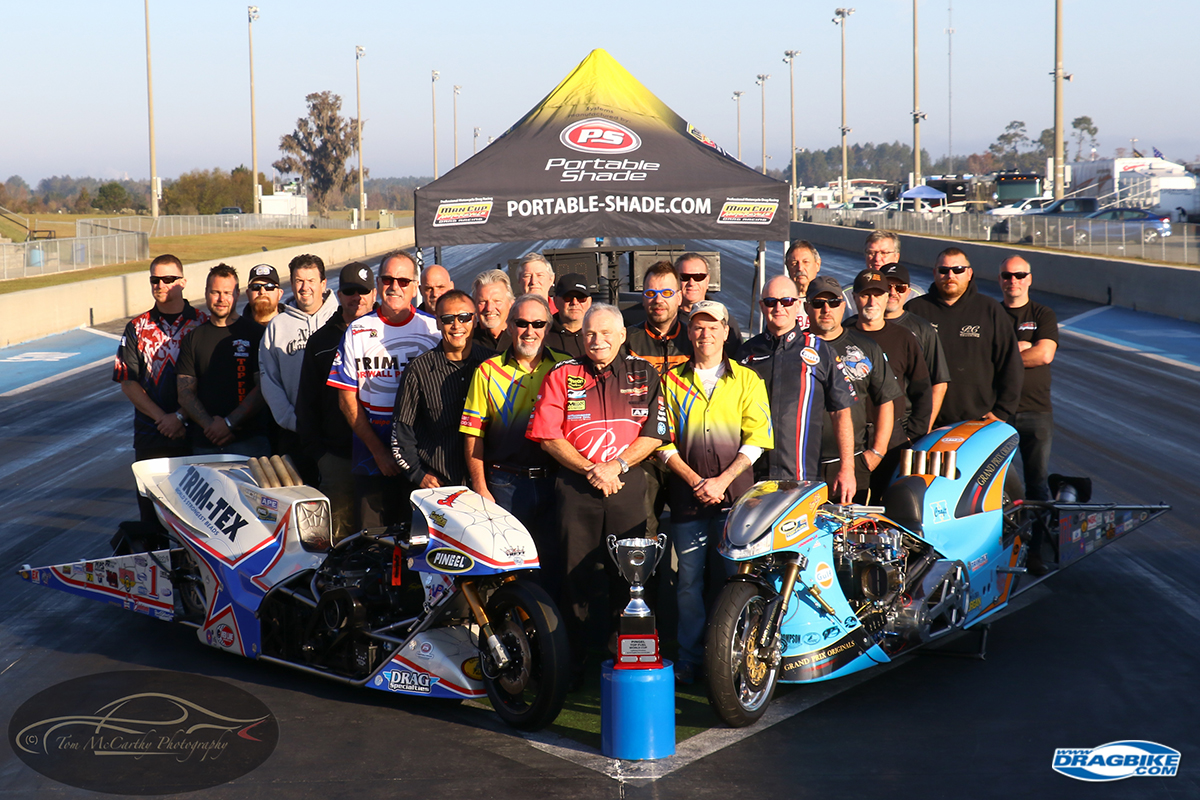 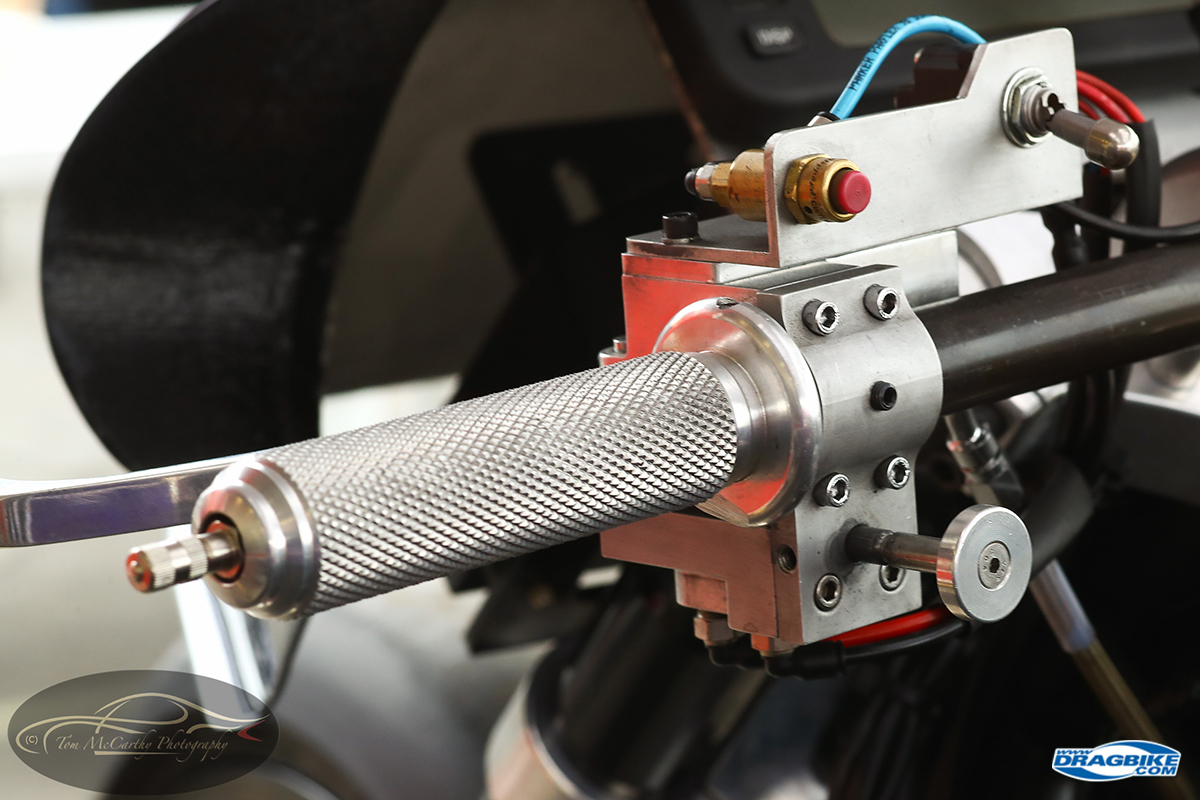 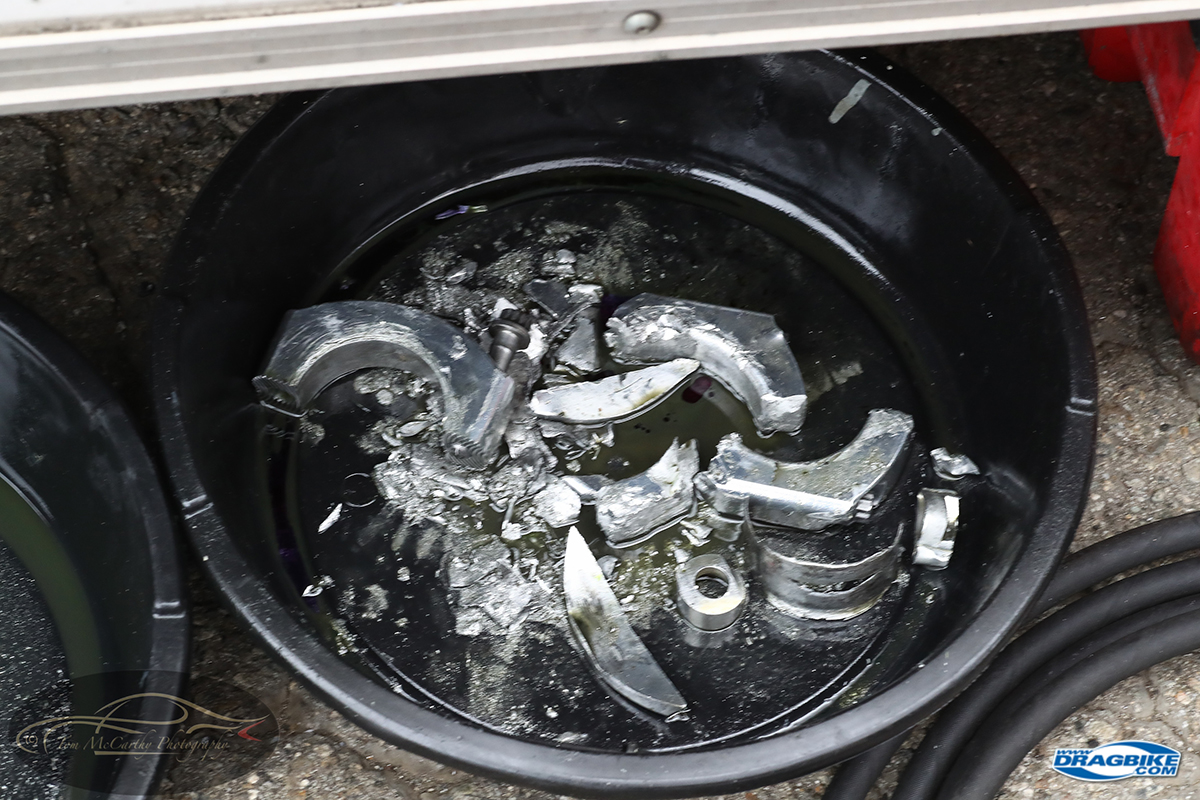 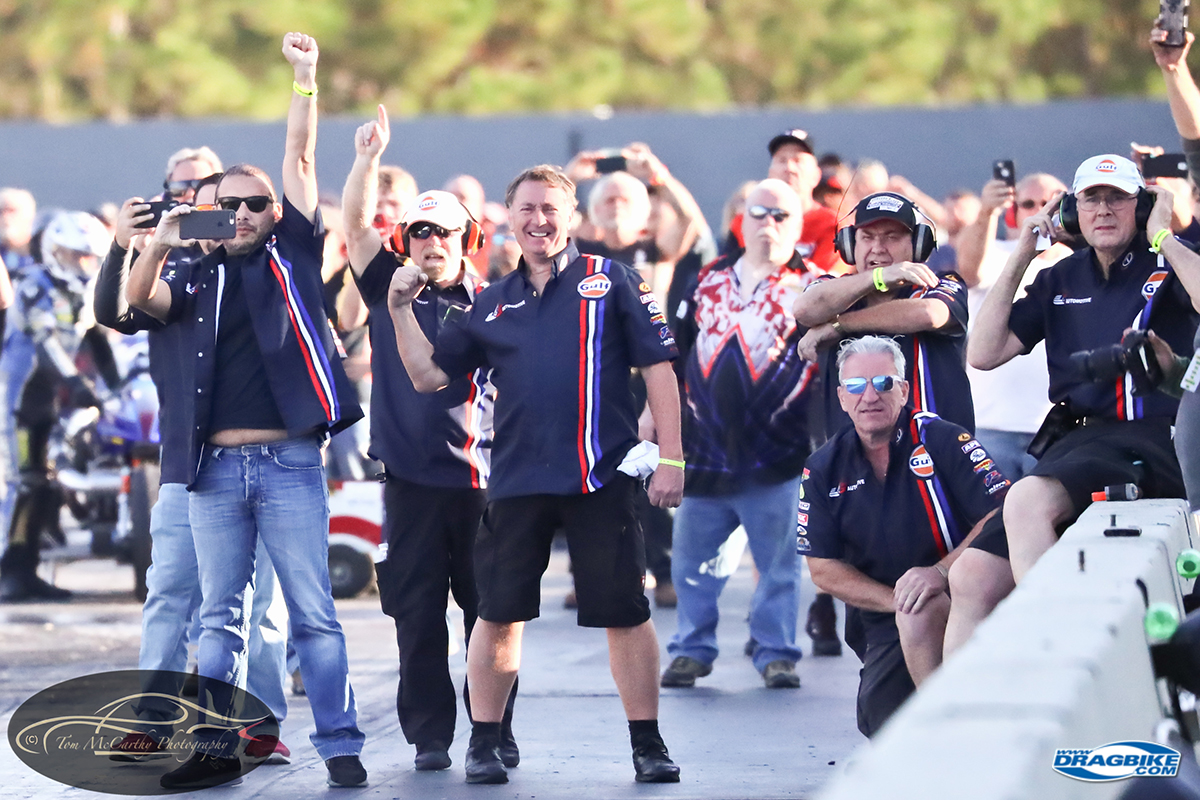 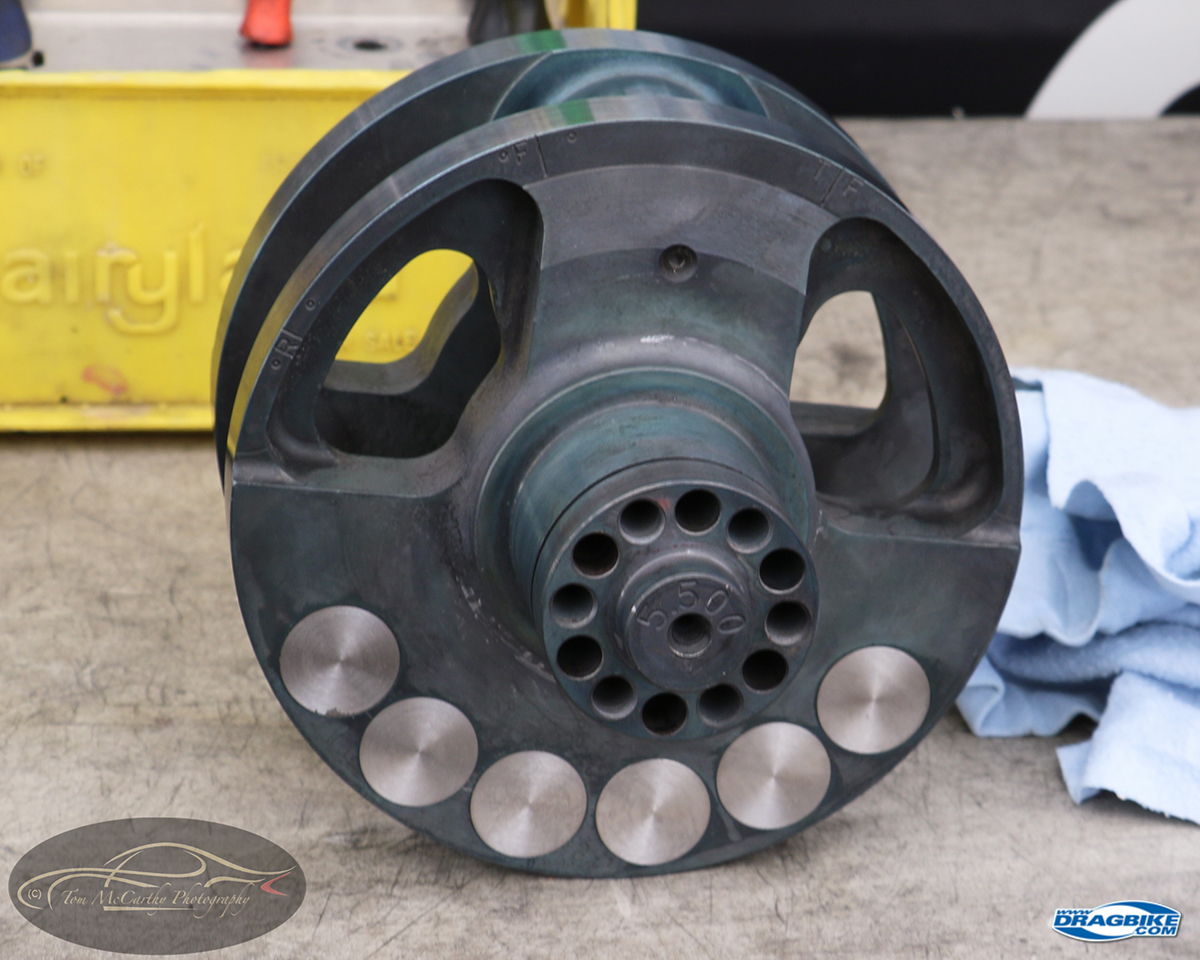 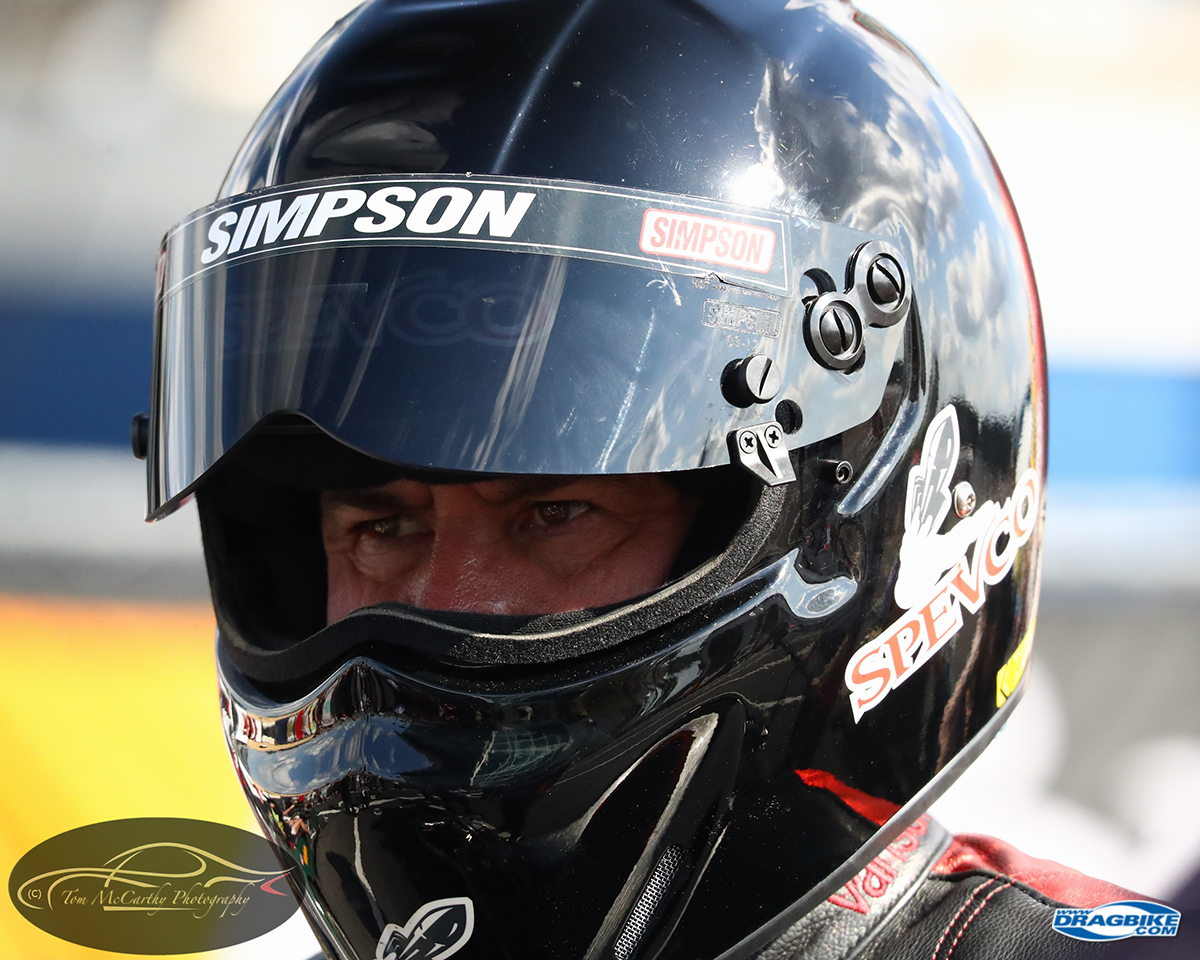 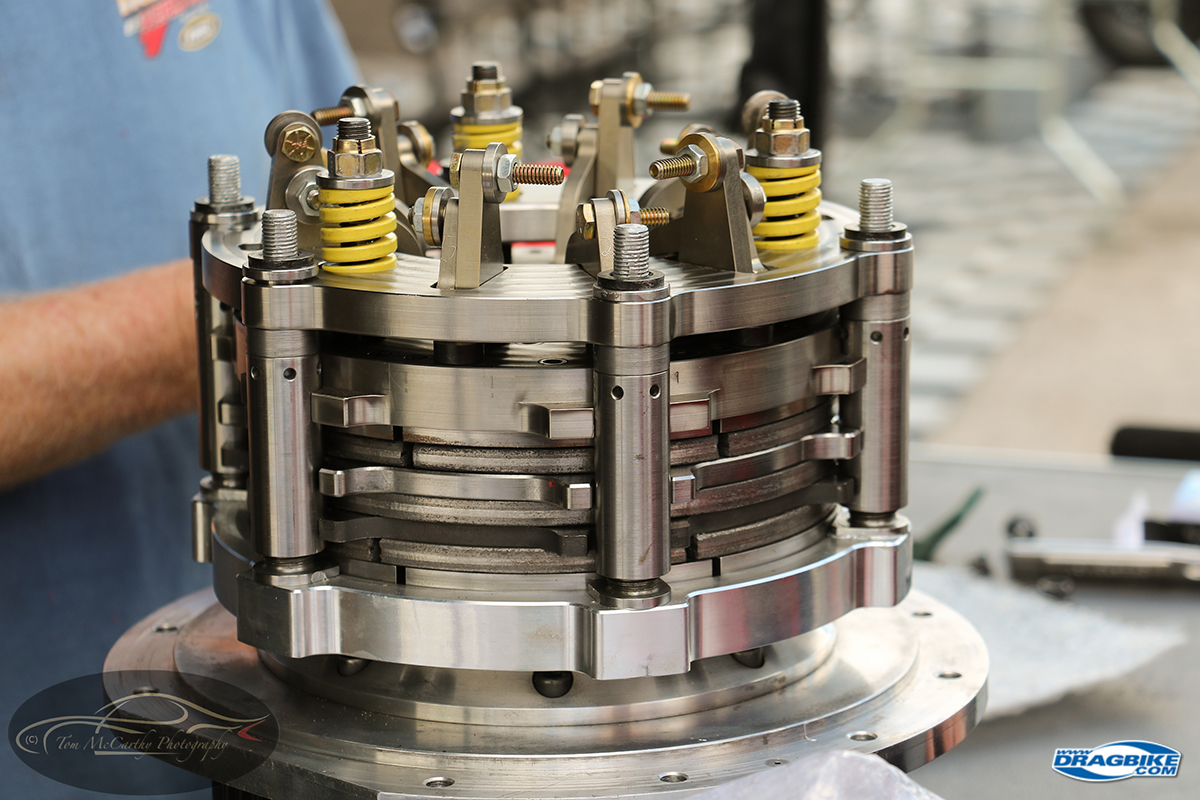 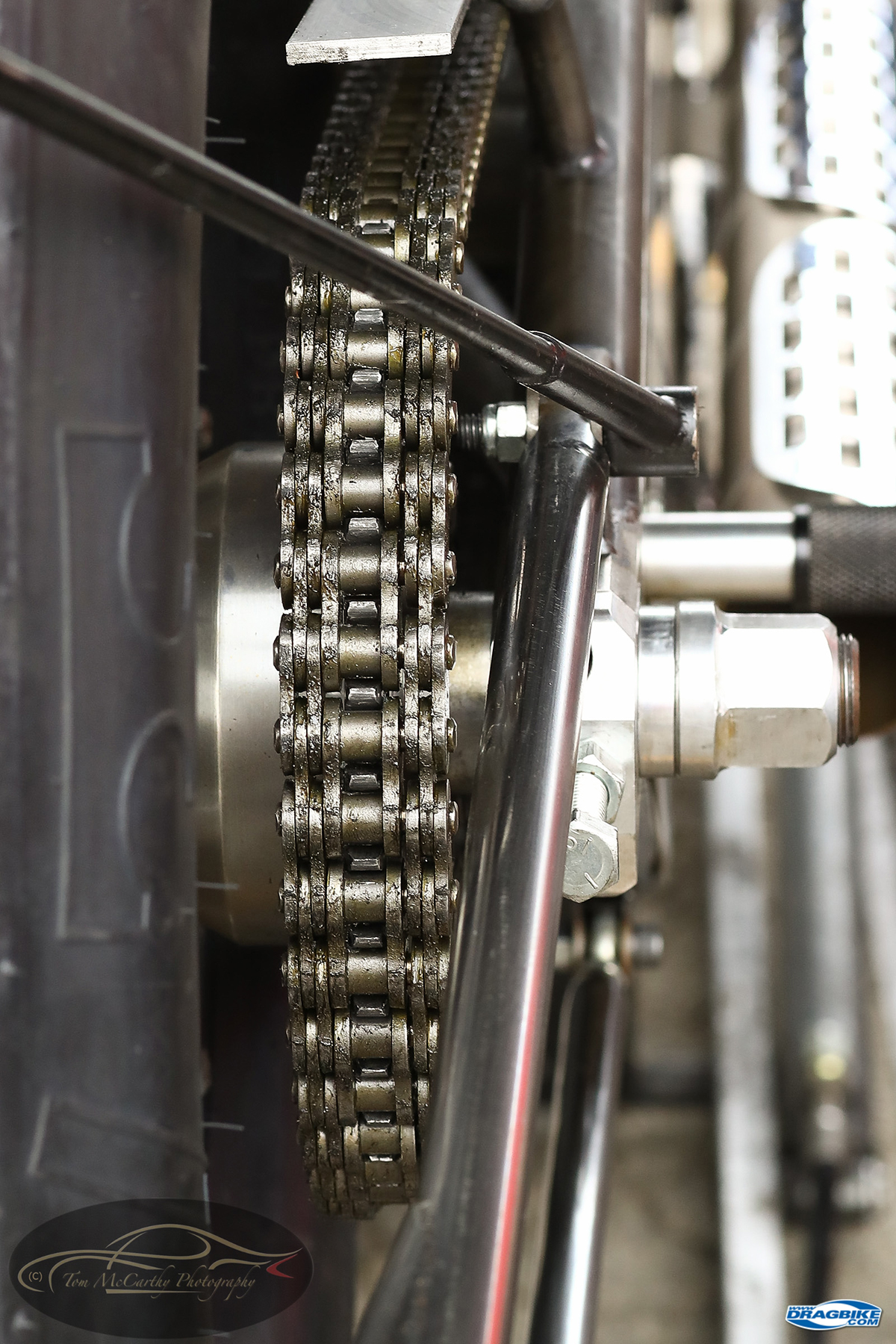