HomeNews / Race Results1999: What's Going on Inside the IDBA

Thank You!
I am proud to report that the 1999 season was a success! Our World Finals participant/rider count was up 17.39%. Our overall participant count for the 1999 season, compared to 1998, was up 20.7%. These numbers show a drastic increase in participation. (Our usual growth rate is around 10 percent.) Together we must be doing something right! Thank you! 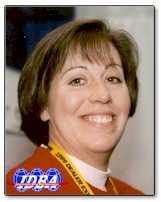 IDBA Members
I am very proud of you! What you do, motorcycle drag racing is exciting. It builds character. During a race weekend, you survive an emotional rollercoaster and you do it demonstrating sportsmanship. I feel very privileged to spend 9 weekends a season with you. We are a family. Some members are more “high maintenance” than others. That’s what makes it fun. Thank you for allowing me to experience racing with you.

IDBA staffers
Thank you Tammy Carrera. You did an OUTSTANDING job at IDBA registration this season! She handled customers, the paperwork (at track and follow-up to the office), and countless jobs not listed on her job description with efficiency, accuracy, and a positive attitude. We couldn’t have made it through the season without Del Lucas, Nat’l Tech Director. About mid-season, Del was unable to attend events due to work conflicts. Even though he was not there in person, he was always available for consultation which offered consistency in decision-making and Super Eliminator indexing. Thank you Del, on the scene and behind the scene. Another behind the scene staffer is Peggy Myers, Director of Memberships. Peggy handles all related paperwork, mailings, etc. for members with care. She enjoys contact with IDBA members on the telephone and quite often can recognize a voice before the name is given. Thank you Peggy, for all the care you show IDBA members. Our official voice this season was Bud DeVille. Thank you Bud for jumping into a sport, motorcycle drag racing, which was unfamiliar to you. Although, your experience as a bull rider was not all THAT different than the motorcycle drag racer’s.

World Finals help
Three people deserve special recognition regarding their contribution to the success of the IDBA World Finals in Memphis. I expected a good turnout in Memphis and got a “better than expected” turnout. Which meant, we needed a little more help than planned for. Jeannie Milligan was one of those people that did an outstanding job, more than she expected to do at the Finals. I had planned to bring Jeannie in to consider how she might help for the year 2000. Luckily, she brought along Brent Ballew, who jumped in to help willingly and cheerfully. Both, did an excellent job, especially without knowing what to expect in advance. Brent turned out to be a REAL asset to me personally. The IDBA F350 truck popped a power steering line Friday morning at the racetrack. That was my ONLY source of transportation during the weekend and the ONLY truck I had to pull the trailer. Anyway, the racetrack staff offered to help (I am so blessed to be surrounded by good people). Gary was able to get the part and ATTEMPTED to put the part on. Finally, about 10 p.m. Friday night, Brent and Jeannie come to the tower to ask if there is anything else they could do today. I mentioned the truck. Brent went right over to the track shop and was able to put the line on. Whew! Boy was I glad! Brent and Jeannie, both, did numerous things to make the World Finals run smoothly. Thank you Brent and Jeannie! The good news: They will join us to work the 2000 season! Whew….I needed some help! The third person that jumped in without being asked at the Finals was Chuck Simpson. Those who know Chuck, know he’s a “take charge” person. Those who know Chuck, know he knows racing AND knows motorcycle drag racing. Those who know Chuck, know he helped to make the World Finals run smoothly and fairly. He was especially valuable on Sunday. He helped to coordinate with the tower personnel to run the race with extreme efficiency. Little time was wasted. Thank you Chuck!

Others to Thank
To Robert & Michelle Hatchen and staff of Photos to Go, we thank you for providing photographs to riders at each event and to the magazine. To Nina Henderson and staff of Motorcycle Performance Magazine, we thank you for the continued support of IDBA by offering race coverage, editorial coverage, sponsor coverage and representation of and communication with our membership. To IDBA Racetrack Operators, we thank you for giving us a “place to play” during the season, continued improvement of your facility, and support of the motorcycle drag racing community. Thank you all!

IDBA Membership
The most respected motorcycle drag racing organization in history IS the RIGHT CHOICE FOR YOU! Membership in the International Drag Bike Association says there is something special about you. It says you are part of the oldest and largest group of organized motorcycle drag racers in the world. Membership in IDBA says you race, or will race soon, or may at some time in the future, or that you are a wholehearted supporter to the most down-to-earth, most treat-everybody-just-alike, well, most respected motorcycle drag racing organization. We define ourselves by our affiliations, and if you’re the kind of person we think you are….we’d like to have you as an IDBA member. Join today. Contact us on the World Wide Web at idbaracing.com or call us a 1-800-553-IDBA.

Changes from the previous release: March date from 11-12 to 25-56, July 23 to Aug. 6th and June 25 to June 18. This is FINAL. No more changes….whew! I am very sorry if these changes caused anyone hardship. It was unavoidable.