Where are They Now : Michael Capozzio 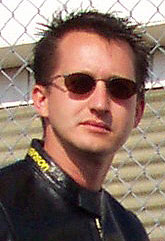 Born September 4, 1970 in Newton Falls, Ohio, Michael Capozzio grew up in a family that was never involved in ball and stick sports, they did motorsports. Michael grew up at Thompson Drag Strip watching his dad race cars. Although Michael grew up at the track and his dad begged him to hang out in the garage, Michael showed little interest in racing. As he grew to driving age, he had his share of Chevelles, a Chevy II, and a bunch of Trans Ams, yet was never serious about racing.

In 1998 everything changed. Michael worked next to Dean Frantz at Norris Auto Mall. Dean would always talk to Michael about going to race at Norwalk. Michael eventually tagged along and saw Dean’s bike and was blown away. The first time Dean fired his Pro Stocker in the trailer, Michael thought, “Man, I’ve got to have one of those.” Michael got a job with Mr. Gasket and eventually got involved with Prostar as a sponsor through the ACCEL brand. His first Prostar race he brought his custom chopper which ended up getting in a British bike magazine that was in attendance to cover the event. McBride loved the bike so much, he disappeared on it for about an hour.

After hanging around Dean for a couple of years, he couldn’t take not being involved anymore. In the Fall of 2001, without telling his wife Tracie, he drove six hours to Pennsylvania and bought a Koenig chassis. He brought it home, bought one of Dean’s KZ engines and put it all together to run Super Comp.

A few months later, Michael drove to Gainesville, Florida for the Prostar season opener with Dean Frantz and Rick McWaters. They schooled him the whole way down on every possible scenario that he could encounter. When that got to the track on Friday, Rick pushed Michael around the pits so Michael could learn how to steer. He had never been on the track on anything and was overwhelmingly nervous. 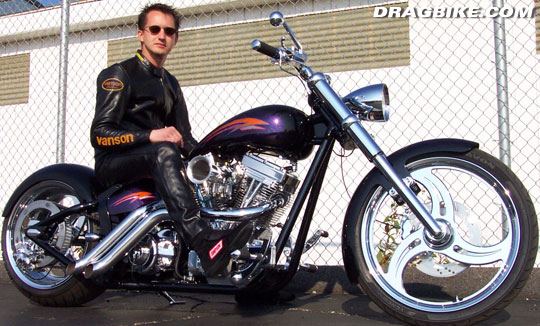 Dean, Rick, and Michael headed to the staging lanes to make Michael’s maiden voyage during the tune and test session. Dean instructed Michael to do a burnout, stage, launch, and shut it off, just to get the feel of the bike launching. Rick started the bike, Michael did a successful burnout and rolled up to Dean. Dean lined Michael up, the tree came down and he let go of the 2-step. Michael thought, “What a feeling!” as he hit the chip, finally shifted and he remembers the feeling of snapping his neck, he hit the chip again, and proceeded to go all the way down the track.

On what was supposed to be a 60’ shakedown pass ended up to be his first pass down the track running a 10.10 and he was ecstatic. Before the excitement could sink in the next bike made a pass down the track. It was Karen Stoffer on Greg Cope’s Pro Stocker. As Michael watched from the return road he saw Karen sit up, came off the bike, slid down the track and then the bike went up in flames. That somewhat tempered the excitement making Michael ponder what the heck he had gotten himself into. That’s not the kind of thing you need to see following your first pass down a race track.

By the end of the day Michael was running consistent 8.90’s. From there on out Michael was hooked. He continued to attend every event that year with Dean and Rick and continued to get more comfortable on the bike. Michael said he really enjoyed the Prostar “family” and in 2002 wanted to try to become more involved. As the Product Manager for ACCEL Motorcycle Products at Mr. Gasket, he talked them into sponsoring the Pro Stock class for the 2003 season. He also ordered a new Track Dynamics Apex aluminum chassis for the 2003 season. Although Michael believes there were only a handful of the Apex chassis ever built, he said it may possibly be the best chassis ever made. 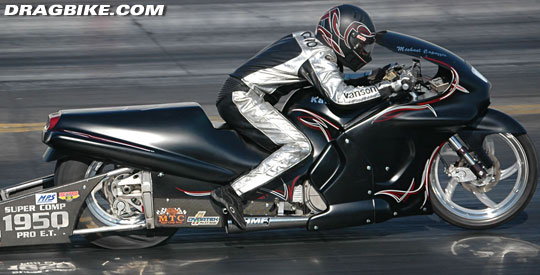 Michael’s 2003 season was great – especially Indy. Dean tuned Michael’s bike all the way to the final round in Pro ET against veteran and multi-time champion Mike Coulson. Even though Michael had just sold Mike a set of Lectron’s at a killer price, he wasn’t about to take it easy on Michael. They were the last two bikes to go down the track. It was late and dark. The last thing Dean said to Michael was don’t red light. Michael cut a .001 light to Mike’s .089 but ran .03 off his 9.00 dial-in while Coulson won the race running a 8.903 on a 8.90 dial. They said it was the closest race of the weekend.

2004 was even better with Michael taking the #4 plate in Super Comp. He said his most memorable event was the 2004 event at Norwalk. He has fond memories of the Saturday night bonfire. Billy Vose brought a baby deer for the kids to pet, (not adults eat.) Michael’s brother, mom, grandmother, uncle and cousins all came to watch. We even had bicycle races for the kids. Like a lot of others Michael eventually had to cut back on the amount of national events he could attend. He started going to his local track more often; then his son decided to start racing Junior Dragster which has now become their family activity every Saturday. Today Michael works for Best of Show Automotive in Mentor, Ohio. It’s a museum that also does full body off restorations on muscle cars. Visit www.bestofshowautomotive.com to take a look at their massive showroom. 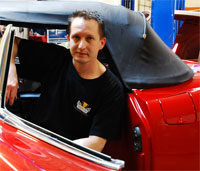 At first glance it looks like my Hot Wheel collection, except they’re all real. Next time you are in Mentor stop in and say hello.

What year did you start racing or being involved in racing? 2001

History of racing bikes and classes: 1990 something Koenig sportsman chassis. Rode for 2 years.

Goals: To win on the same day as my son.

Interest outside of racing: Snowboarding.

Hero: Dean Frantz and Rick McWaters, because without both of them I would never have gotten started. I can truly say I learned from the best.