Racers and fans expect record-breaking performances when they attend an XDA event. And the 5th annual Superbike Showdown at Maryland International Raceway delivered just that and more on Father’s day weekend.

Over 560 entries were on hand to witness history on the world-famous quarter-mile of MIR. The Pro classes get top billing for bringing incredible performances, but the sportsman racers kept the show rolling with the highest level of competitive racing.

The Orient Express Racing Pro Street racers were dropping their personal bests all weekend long for performance action from the first qualifier until the final elimination run.

Right out of the gate during Friday night’s first round of qualifying, Rodney Williford threw a 6.385 on the scoreboard that his competitors would not outdo.

Qualifying was still impressive as three racers lowered their ET’s, and one raised his MPH. James Waugh lowered his ET to a 6.505 and ran his fastest pass ever at 225.52 mph.

Curtis Brown also made a giant leap from 6.701 to a new personal best of 6.605 to be in the top twenty quickest Pro Street racers of all time. Gaige Herrera lowered his ET to a 6.1491 from a 6.535 set at the May MTC Engineering Summer Nationals.

Midwest racer Brett Ware also made a big move from his previous 6.903 ET to running a 6.791 in qualifying, and then a 6.716 the next day in eliminations. Blake Sanders also made a slight improvement to his standing with a 6.61 pass.

Rodney Williford’s domination continues as he took wins against Jordan Haase, Curtis Brown, Greg Wallace, before meeting Justin Shakir in the finals. Shakir is the only racer that has been able to win against Williford in the past two seasons, and he was on a mission as he made his way through his side of the ladder. 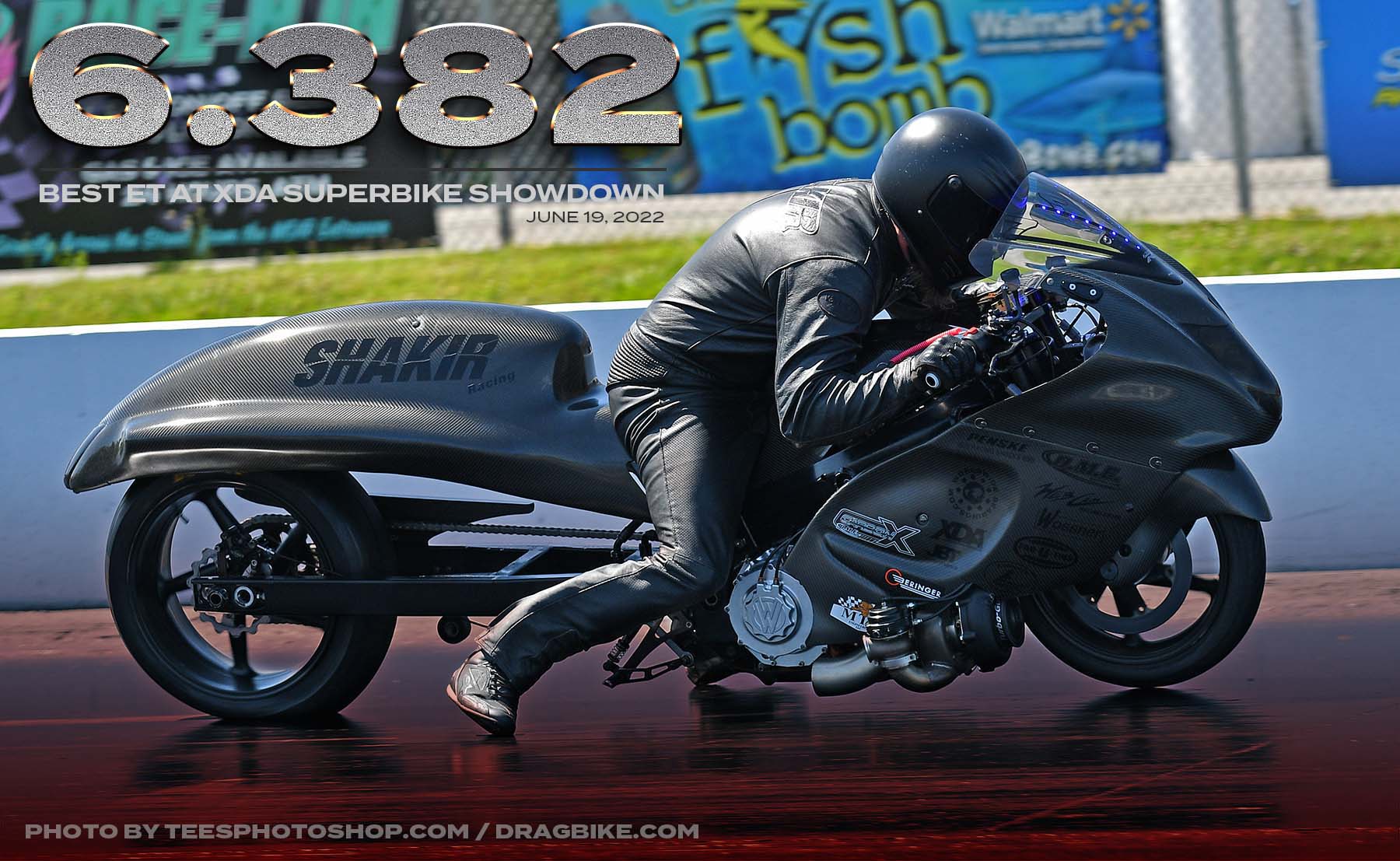 Shakir qualified with a 6.465 and then went on to lower that ET with a 6.404 against Curtis Brown and then again in the semi-final with an incredible 6.382 against Brett Ware. This 6.382 pass puts Shakir in the #3 spot on the Pro Street GOAT list, surpassing Williford’s 6.383 and setting the MIR Track record.

The final round was electric, as everyone knew it was anyone’s win with this match-up. Williford got a slight starting line advantage with a .061 to Shakir’s .078. Williford took off, making a perfectly controlled pass straight down the middle of his lane while Justin struggled to keep his monster under control as it veered toward the center line, costing him the run. Williford took the win with a 6.491 at 229.81 mph, making this his third consecutive win of the season, and a win for his kids on Father’s day.

It was an All-Star weekend for Rickey Gadson in DME Racing Real Street. Gadson hit the trifecta as he took his first #1 qualifying position with a 7.509, ran a 7.484 for the low ET of the event, and then went on to dominate eliminations. Gadson, with an earned bye in round one, took wins against Brittany Bohne and Ralphie Navarro on his way to the final.

In the final, Gadson faced class champion, David Stewart. Both riders left the tree at the same time, but little by little, Gadson gained ground on Stewart to turn on the win light running a 7.524 to his 7.931. Will Gadson be able to repeat next month at the WGPC Bike Fest on July 22-24? Make plans now to be at Maryland International Raceway.

We saw two firsts this past weekend in HTP Performance Super Stock. For the first time, Curtis McDougald was not the number one qualifier, and Darion Payne was not in the final round. Instead, these two riders flopped positions as Payne took the number one qualifying spot with an 8.841 and Curtis McDougald made it to the finals. The one thing that did stay the same was Mike Davis making a final-round appearance. This would be Davis’s third final this season as he had a new opponent to face. David got the starting line advantage on the tree over McDougald, but McDougald outpowered Davis and took the win.

The Vance & Hines 4.60 competition was hotter than ever, with six racers running dead on 4.60 in qualifying. Terry Tompkins earned the top spot with a 4.602 but was taken out in round three by Jimmy Shifflett, who ultimately went on to the final round. Mac McAdams was leading the points chase until he took a loss in round one that opened up the gate for Ronald Procopio to pass him in points.

And Procopio didn’t let this opportunity pass him by as he sliced his way through the competition to make it to the final to face Jimmy Shifflett. Shifflett wanted that win so bad that he jumped the gun at the tree and turned the red light on instead, handing Procopio the win and the points lead.

Desmond Spalding had the competition running scared as he took two wins uncontested in both APE Nitrous Bulls and Boosted Bulls. Spalding took the win in Boosted Bulls on ‘Moonshine’ after Frankie Stotz on ‘Reddi-Wip’ broke a transmission in shakedowns and could not make the call. On ‘Sho Nuff,’ Spalding also took the trophy as he stood uncontested.

In 3 Sixty 5 Monster Bulls ‘Tik Tok’ was back on top as Jason Herron took his Hayabusa monster back to the finals. On his way to the final round, Herron took out Tik Tok’s owner Spencer Claycomb and David Martin on ‘Unknown’. Mike Burkhart was there on ‘Attila’ waiting on Herron after he took out’ Grave Digger’, class champion ‘Pickin Pockets’ and ‘Flawless Victory.

In the final round Burkhart and Herron blasted off the starting line but ‘Attila’ tried to take flight with a monster wheelie allowing ‘Tik Tok’ to turn on win light as Burkhart fought to regain control over ‘Attila’.

Aubrey Valentine on ‘Stunna 4 Vegas’ hit the jackpot in Tommie’s Motorsports DMV Bulls. At the Platinum General Services Season Opener Valentine made it down to the semi-finals, and returned this past weekend ready to go all the way. Valentine took wins against ‘Da Setup’ and ‘Bad Bitch’ on his way to the final. Sitting in the other lane as John Carter on ‘Grey Matter.’ Carter took wins against ‘Minion’ and ‘Monkey Business’ to earn his spot in the final. The final match was well matched as both riders made strong side-by-side passes, but Valentine wiped away the ‘Grey Matter’ and turned on the win light.

In Tommie’s Motorsports All Motor Bulls, David Fondon had an easy night on ‘Bad Bitch’ as he took out ‘Da Setup in round one. Fondon then went on to the finals to send Quentin Letson on ‘Q’ back to the alphabet soup as he took the win.

The 1 Stop Speed 5.60 class was led by Jeff Stahl who qualified #1 with a 5.601 over the thirty-five bike field of eighth-mile racers. Stahl would be defeated in round two by Duane Jackson, who would go on to the final round. Jackson, a winner circle veteran, faced the rookie Rico Brown in the final. Brown had just graduated high school on Friday and had his entire family in attendance for this race.

Brown ended the 2021 season with a win in this class, and he was determined to do it again for his family. Brown got the jump on the tree over Jackson, and both competitors took the stripe while breaking out in the process. Jackson’s break out was worse with a 5.559 to Rico Brown’s winning 5.578. It was a great gift on Father’s day for Boo Brown who was standing on the starting line watching his son take the win.

Mickey Thompson Tires Top Sportsman had a new #1 qualifier with Ben Knight running a 7.351 to make him a full second quicker than the #32 qualifier of Barry Pryer Sr with a 8.391. In round three of competition Robin Procopio would take Knight out of competition on her way to the final where she would face off with Rob Hunnicutt.

Hunnicutt dialed a 7.98 and Procopio a 8.12. Off the starting line, Procopio would have the clear starting line advantage with your .024 light to Hunnicutt’s .073. As the two raced to the finish line, it looked like Procopio’s win light was going to come on, but then she broke out with an 8.105 to give the win to Rob Hunnicutt.

The staging lanes were filled in MPS Racing Pro ET with over a hundred racers looking for that big $5,000 win on Sunday at MIR. Harvey Powell and Ashawn Hopkins executed seven rounds of competition until they met for the final.

Powell, with an 8.11 dial, cut a .012 light that would prove to be a massive advantage over Hopkins’s .050 light on his 8.40 dial. Hopkins crossed the finish line running close to his dial with a 8.416 while Powell ran further off his dial with a 8.143. Hopkins should have seen his win light come on, but instead Powell took the win with his holeshot advantage at the tree.

Brock’s Performance Street ET racers came as far as Florida to race at the FuelTech Superbike Showdown. And Florida racer Robert Parker won six rounds to find himself in the final against Delaware racer Mark Blake. Parker is no stranger to the winner’s circle, but this past weekend Blake showed he wanted the win more when he cut a .007 reaction time and then ran dead on his 8.69 dial to take the win over the Floridian.

Over a hundred racers entered the VooDoo Components Bracket Bash on Saturday for a $3,000.00 to win payday. Louis Green Jr and Blake Childress had to win seven rounds of competition to earn their places in the final. In a well-matched final, Green Jr dialed 9.05 cut a .044 light while Childress on an 8.90 dial cut a .043 light.

Both racers were side-by-side down the quarter-mile as neither racer wanted to give up taking stripe; as they both broke out of their dials as they crossed the finish line. Louis Green Jr’s got the win with 9.037 to Childress’s 8.881 break-out time.

In the Friday night Hard Times Parts & Service Gambler’s Race Ben Knight and Tom Dunham dominated for five rounds of competition before they went to battle against each other. Knight dialed an 8.93 and Dunham an 8.83. Dunham had a slight starting line advantage with a .022 light to Knights .058. As both racers approached the finish line, Knight lifted while Dunham stayed in the throttle breaking out with an 8.824, giving the win to Ben Knight.

For full qualifying and round-by-round results of the event, visit xdaracing.com.

The next stop for the 2022 XDA season will be back at the Maryland International Raceway for the 22nd annual WPGC Bike Fest on July 22-24, 2022! This is the biggest XDA event of the year! The event will feature Live Bands, Bikini Contest, Sound Competition, Custom Bike Show, Beer Garden with Bikini Bartenders and a vendor midway full of great deals on motorcycle parts, accessories and apparel.