HomeTeam ReportsWilburn Racing : A win 5 years in the Making

Wilburn Racing : A win 5 years in the Making 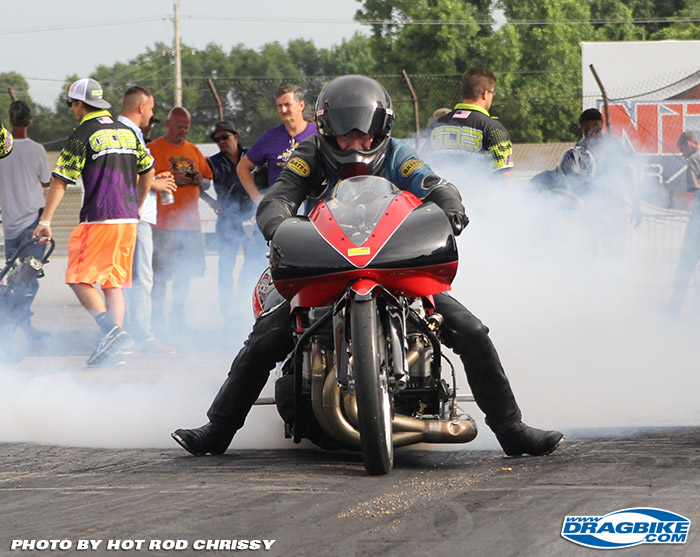 A win 5 years in the Making

Chuck Wilburn started racing Pro Mod in 2010 with a Hayabusa and 5 years later he finally got a win on GS!

“We wouldn’t have this win today if we hadn’t finally given up on the busa last year and switched to the GS.” said Chuck

Man, last year… what a streak of bad luck.

We finally decided to go to the GS early 2014. Walt Timblin built us a chassis and by July 2014 we were ready to make a test pass.  We loaded up, went to Holly Springs, MS to test and on the first pass I couldn’t get stopped and ran off the end of the track. I had to bail off the bike and it T-boned one of those big round hay bales.  I remember thinking I can’t believe this is happening!!  I can’t believe I’m about to bail off this thing! Needless to say, there was quite a bit of chassis damage.  But we stripped the bike back down, took the chassis back to Walt and he front-halfed it over a weekend.  We can’t thank him enough for building such an awesome chassis and for dropping what he was doing to get us back going as soon as possible! 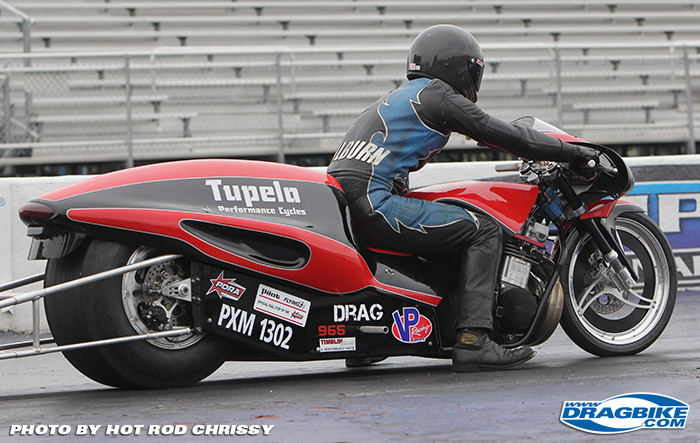 At that point we thought all our bad luck was behind us, wrong!  After putting the bike back together we loaded up for the Man Cup race in Valdosta.  About 2 and a half hours into the trip we stopped for fuel and to check the trailer load.  What we saw when we opened that trailer door was almost inconceivable!!  Somehow the pit-bike battery had shorted out, caught on fire, and burned the whole cargo area of the trailer.  The bike looked like it had been completely powder coated in black soot.  It got so hot that everything plastic was melted- buttons, windscreen, wiring, etc..  By the time we looked, the fire had burned itself out- we had no idea we had a fire until we stopped for fuel. It was at that point that I seriously considered quitting racing all together.  We’d been doing this pro mod thing for years with no success, built a new bike and crashed it, rebuilt it and burned it up in the trailer. SayingI’d had enough was an understatement. 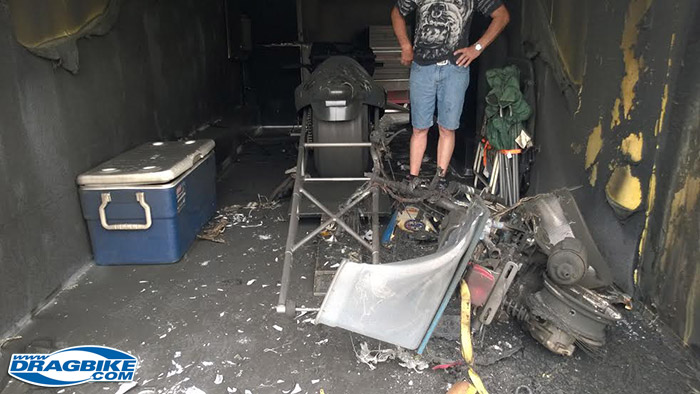 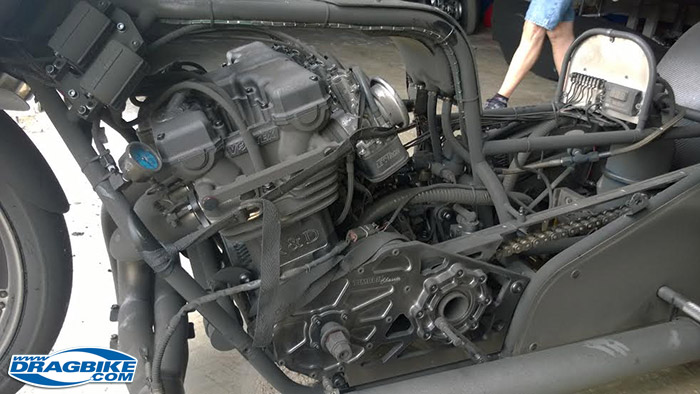 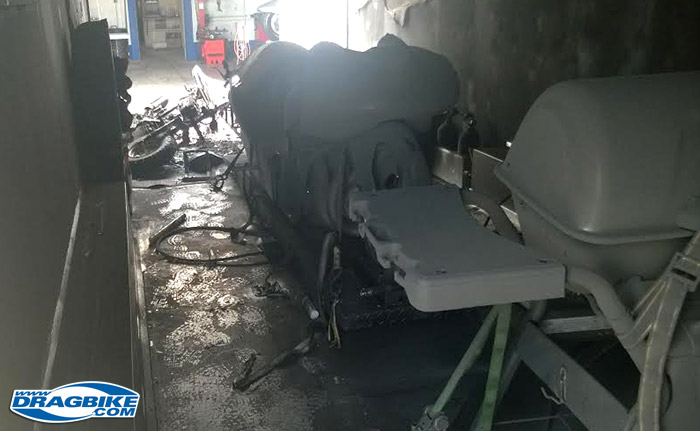 We got the bike back to the shop knowing we had to fix it regardless if we were going to continue racing or not.  We stripped it back down, cleaned it up and replaced electronics, wiring, hoses, etc.  Kevin at Lectron sent us some carb parts to help get us out and didn’t even charge us, so a big thanks to Kevin!  Once the bike was back together I started getting the itch again, I couldn’t quit until I could at least see what we could make this GS do ya know?!?  So by the end of 2014 we had a couple races on it.  No spectacular runs but we weren’t hurting any parts and could definitely see the potential in the bike. 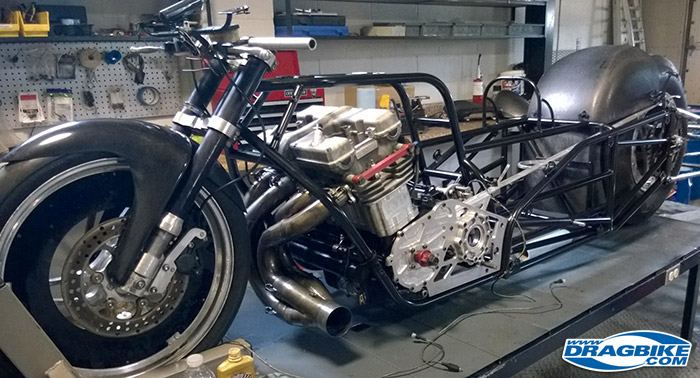 Now back to 2015, the first race was PDRA at the Rock.  There we finally got some decent runs and ran a career best pass of 4.10.  Now we’re on to something!

Next race was PDRA in Louisiana.  I expected to unload where we left off in Rockingham but that didn’t happen.  We still don’t have a handle on this GS clutch and ran a string of 4.14’s and 4.16’s but just couldn’t get any quicker.  We came home scratching our heads knowing the next race would be in the Memphis heat, and not having a clue what to do with the clutch for that!  We made an educated guess and got lucky, the clutch still wasn’t a perfect match for the conditions but we managed consistent 1.03 60ft times on a super hot track.  In qualifying we were #1 for the first 2 sessions and lost the #1 spot in session 3 by .002 so we were pretty happy.  I felt like then we had a pretty good chance of going some rounds because our bike was running better than anyone else in the heat of the day.  But to go some rounds you gotta have a little luck too, and that luck came in round 2 of eliminations against Richard Gadson.  Richard put a .009 light on me and I was dead late!  Even though we went 4.12, Richard should have beat us, but his bike didn’t shift high gear and we got around him..whew!  That was a big win because then we had a bye into the final.  We went ahead and made a full pass on the bye running another 4.12 giving us lane choice against my good buddy Jeff House.  We left the bike alone for the final and surprisingly shook the tire pretty hard in 2nd gear slowing us to a 4.15 but Jeff had already red-lit so it didn’t matter.  Finally, success!! 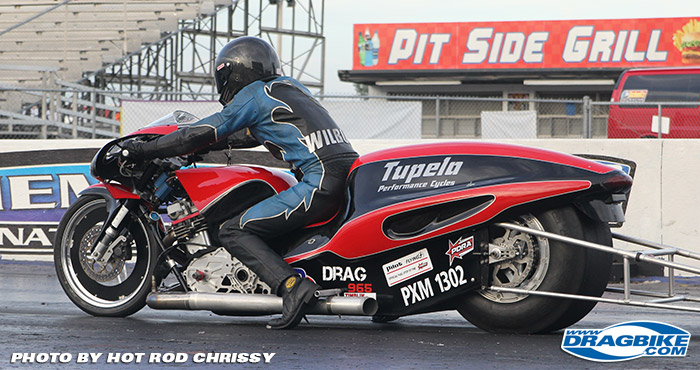 That win was a looong time coming!

Now to the thanks part! First of all most everybody knows that I race with my Pop.  We’re a team and I couldn’t do it without him!  We’d also like to thank Ashley Owens and the McKinneys.  When we decided to switch to the GS I asked Ashley if he knew of anyone with an engine for sale.  He put me in contact with Scott and he sold me a really good engine at a really good price and we really appreciate it!  And to Walt Timblin for building such a quality chassis and helping us out as much as he did after the crash. Big thanks to Travis and Billy who helped us at the first race back after the fire to get the bike going straight.  My buddy Jeff House for a few clutch tips, and the whole Doghouse Racing crew for the starting line help in Memphis! 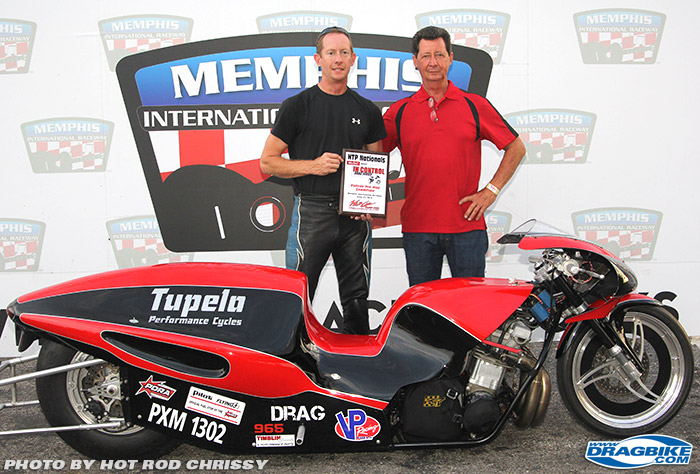