Ethan Barkley arrived at “The Strip” in Medicine Hat looking to continue his quest for the 2016 CMDRA Pro Street Championship. With records set at the previous event, there was no doubt that his Parts Canada supported GSX-R1000 “Eleanor” could push the times even further into the low 7’s in the quarter mile at this event. 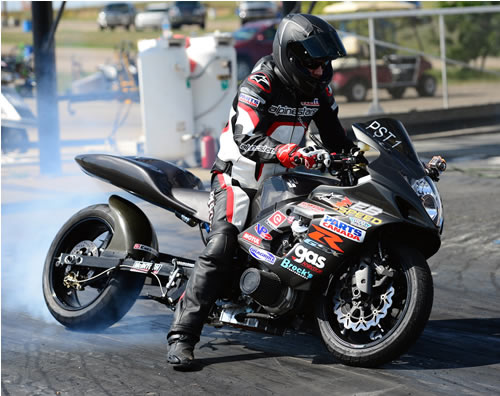 Barkley scrubs in the tire before the opening pass

The plan was to leave the same setup in the bike, since it worked so well in Edmonton. The surface at Medicine Hat has known to be stellar and Ethan has set numerous E.T. and speed records here in the past. In the morning test session things didn’t go so well. The bike planted the tire good on the launch, but after it moved about two feet, it spun! Not the way Ethan planned to start his day! The team quickly got the bike cooled down and prepared to sneak in a second pass at the end of the short 90 minute open test session. Even with a slightly softer tune up, the result was the same, tire spin just a few feet after the start! 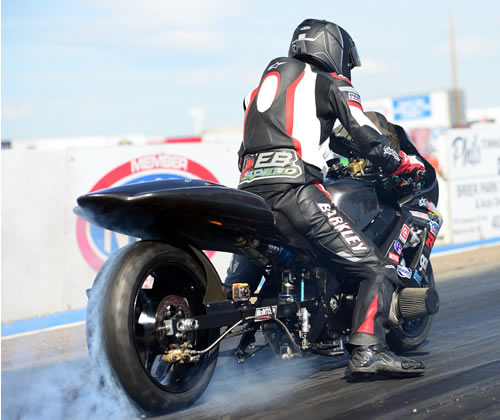 Going into the opening round of qualifying Ethan had zero information and no feedback on what the setup should be. So he decided to shorten the bike’s wheelbase to 68″ and remove some ballast off the front of the bike in hopes of getting the rear to stick. Well it stuck alright and lofted the front tire a couple of times in the first few hundred feet, making for a wild ride! This was great for spectators but did little for the elapsed time as he crossed the line with a dismal 7.85 / 167 mph. Another lost run with very little useful data. It appeared the track was improving and Ethan decided to go back to the longer 69″ for round two. With a softer tune and the longer wheelbase, Ethan tip-toed off the line and ran a respectable 7.69 / 183. This was supposed to be the opening pass, not something he would run midway through qualifying. 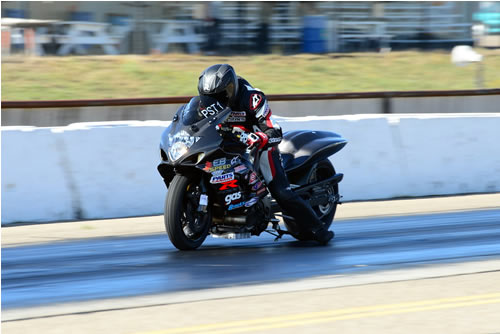 Hunting for grip, Barkley fly’s past the 330′ mark

For the third qualifying run Ethan needed a bit of luck as he was over two tenths back of the number one spot held by Rob Aston. It would take a clean pass to put him on top going into Sunday. Unfortunately even with a soft tune, the track just wasn’t holding the rear tire as the boost started to ramp up and the last run was aborted only a few feet past the start. A major disappointment for Ethan as he was so determined to make his mark at this event. It was obvious the track wasn’t going to let the team break records, so it was time to regroup and come up with a winning formula for Sunday. 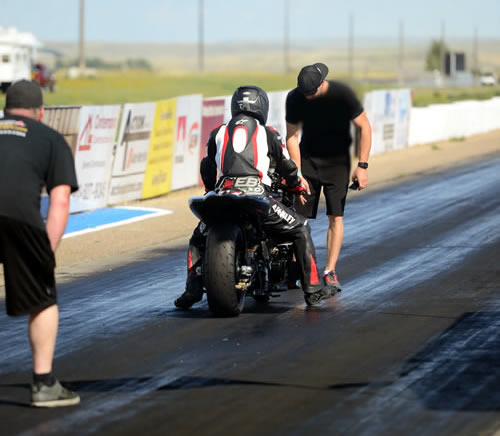 The EB Speed crew lines Ethan up in hopes of finding the much needed traction they need to make a clean pass!

Sunday morning the team had another shot at a test pass in order to try and come up with something that would work on this less than optimal surface. Part of the problem was the heat, as the temperature crept up Ethan fealt the track wouldn’t hold much power so he decided on a really conservative setup. The bike was back to being short at only 68″ wheelbase. The biggest change was in the boost parameters, they were really conservative for the first two seconds of the run. The plan was to get the bike moving and then once the bike was in second gear, then start adding some power. Well the plan worked and the opening pass was a solid 7.53 / 186.6! Finally Ethan was on the right track. 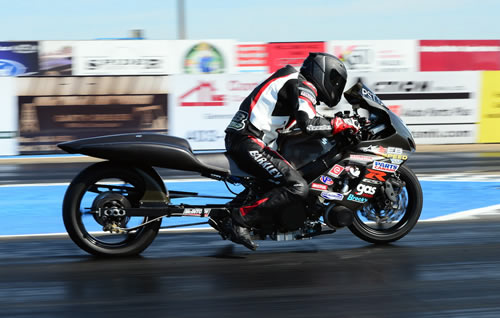 Barkley eases off the line and drives forward to a 7.5 second pass!

Going into eliminations Ethan had a hunch the track was going to be unpredictable, and gambled that it would get worse before it got better in the sweltering 34 degree Celcius heat! He decided to leave the bike the same as the previous pass. It was a great move as his competitor spun in the other lane while Ethan cruised to a nearly identical 7.52 / 187! Now it was onto the finals and he knew there was no room for error against Rob, so he elected to soften the boost ramps ever so slightly in order to try and maintain grip from start to finish. As the lights turned green, Ethan left the line cleanly and slowly built up a good head of steam and pulled off another event win with a 7.67 / 188! 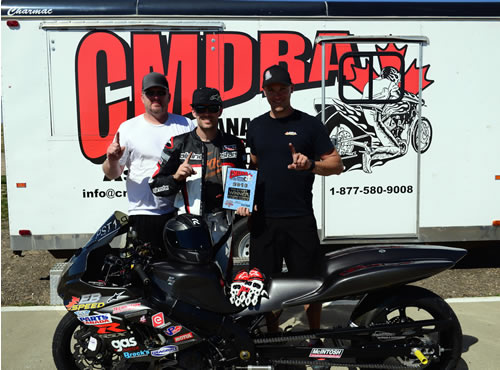 After four races, Ethan has won the last three and has a nearly unsurmountable grip on the 2016 Championship heading into the final event of the season; September 24-25th at Mission Raceway, B.C. Ethan anticipates a good result there and stated ” It’s one of my favourite tracks, the cool fall air combined with sea level density is something this bike likes. I will leave nothing on the table in my quest for more records and my 16th Canadian Championship!