This coming weekend at the NHRA Thunder Valley race, Australian Top Fuel Harley-Davidson rider Benny Stevens is set to have the ride of his life racing against some of the best nitro-burning Harley racers in the world! 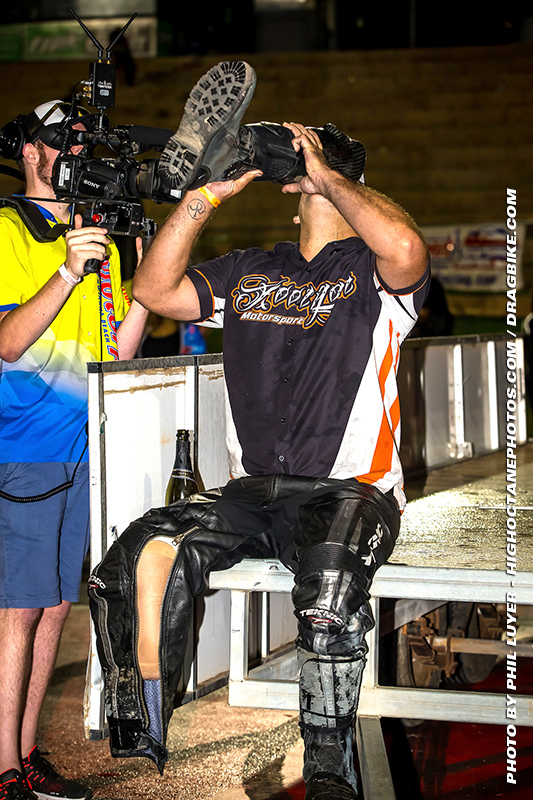 Stevens has always enjoyed life in the fast lane. He grew up around drag racing with his father driving a Top Doorslammer (Pro Mod), while his Uncle’s choice was a nitro Harley.

But it was the motorcycle variety that caught his attention at a young age. The self confessed “Thrill Seeker” loves to go fast, however he has also had to fight a few personal battles that slowed him down a little.

At the age of 23 Stevens was diagnosed with testicle cancer. Thankfully a serious bout of chemo killed off all the bad cells.

Then at the age of 27 his biggest hurdle came when he crashed heavily during a warm up for a Quad Bike stunt demo. He busted up quite a few bones in his wrists and ankles and had a lengthy stay in hospital.

But the real battle came a month later when doctors broke the news that the bones were not mending. The doctor gave Stevens two options.

“I needed to get on with my life,” said Stevens. “Spending more time on my back in the hope that this might work was not an option for me. I just told the doc to remove the foot.”

Today Stevens is an inspiration for all of us. He is a role model with the message to enjoy life and never give up on your dreams.

One of those dreams was to race in the United States.

Earlier this year while racing in the Australian National Drag Racing Association Championship at his home track of Perth Motorplex, Stevens was talking to Terry Stewart from Shaker Products in the US, and before you could say “Happy Days” a deal had been done with Mike Bahnmaier Racing.

Stevens will be on the startline for Rd 7 of the NHRA Mickey Thompson Tires Top Fuel Harley Series.

“This could be a once-only opportunity so my plan is to give it my all and hope for the best,” said Stevens. “Racing against the likes of Jay Turner and co is going to be huge and I can’t wait to twist the grip on the NHRA stage.”

“In May this year I was ready to pull the pin when my younger brother had a nasty car wreck. 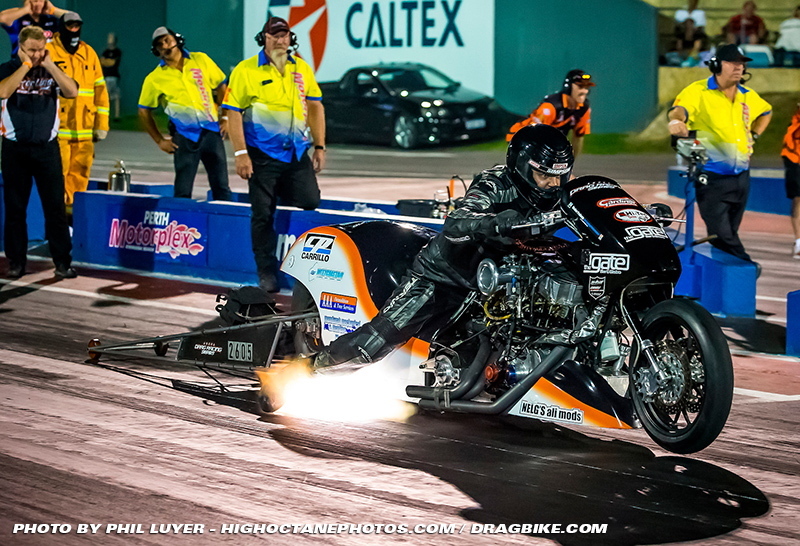 “I didn’t want to go anywhere while Luke was in such a bad way,” said Stevens. We had planned this trip for quite some time but I needed to stay beside him. Thankfully Benny could see Luke’s improving progress each day and with his brothers blessing, the trip of a lifetime went green.

We asked Stevens a few questions as he prepares for this weekends event.

Q: How does this rate in terms of the best thing to happen in your drag racing career?

A: Well, it is certainly up the top. It’s not every weekend you get to pull up to the startline next to the best in the game. Being able to race and learn is one part, but the experience as a whole, is what’s most important and enjoyable.

Q: It must have been difficult and emotional to go ahead with this opportunity following your brother’s terrible accident?

A: Yes it was. My brother and I have had this planned out for some time. We had been working like crazy to make the dream come true for both of us, so it was heart breaking leaving my main man behind.

The night before I left, I double checked with him and asked if it was still OK if I went. He had only just started speaking soft words, and I had gotten a smile and a yes. Pulled on the old heartstrings, but was very moving, and satisfying to see him speak and smile.

Q: Will you still be wearing PINK leathers this weekend?

A: Ahhhh the pink leathers? Well they are due to arrive any day now, and if I can get to the target then I certainly will. I’m still trying to raise some money for Luke’s hospital bills and such. As the GoFundMe page said, if we can reach $30,000 I will wear the pink leathers this weekend for sure.

Q: How has the prep gone for your ride?

A: Prep is good so far. I have just been relaxing, getting the head into racing mode, working on reaction times – everything over here is race related. We start making our way to the track Wednesday/Thursday set up and then it will be game on.

Q: Tell us the difference between your bike at home, to this one?

A: Well the difference between both bikes is huge. This bike I am

riding, is a newer bike, with all the bells and whistles. Engine componentry, chassis design, it’s a completely different gorilla all together and I can’t wait to throw a leg over her.

Q: What is your game plan. Are you feeling any pressure to perform especially with 17 bikes qualifying for an 8-bike field. That’s tough!

A: My game plan is simple. Smack that throttle as if the cables were to snap. Hang on – or off the side and get to the other end as quick/fast and safe as I possibly can!

Pressure to perform? No I’m not. I’m here to ride, learn, enjoy and have fun.  17 bikes is a massive field, so my way to approach that is how I approach the start line back home in Perth – Look to the end of the track and hold that throttle wide open.

Q: How does it feel to be the first Aussie to race a nitro Harley in NHRA competition?

A: I don’t believe there has been any other fellow Aussies that have raced in NHRA Top Fuel Harley over here? Be good to line up against my uncle Kim on the track over here one day that’s for sure!

Q: Any chance that this deal could extend to more races in the US?

A: Well, what I will say is it’s an open book at the moment. Who knows what’s around the corner. I know one thing for sure; I will do whatever it takes to have my little Bro on the start line here, with me one day. 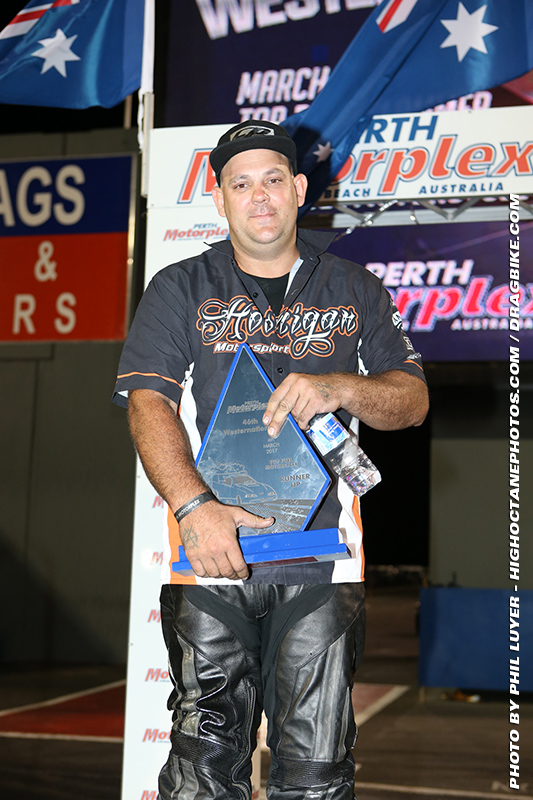