XDA Champions will be crowned at DME Racing Fall Nationals

XDA Champions will be crowned at DME Racing Fall Nationals

Two wheels, one mission, defeat the competition and secure the crown.

In the seventh and final battle of the year, sixteen classes and over 700 racers will be armed and ready as they compete for the 2021 XDA Championship titles and $85,000 in cash purse.

And to end the season with a bang, XDA is offering up mo’ money to their sportsman racers with a $10K to win MPS Racing Pro ET race on Sunday! The class will feature a guaranteed $14,300 total payout, with double-entries permitted in Pro ET. Riders MUST enter their second entry on a different bike with a different bike number, no exceptions. 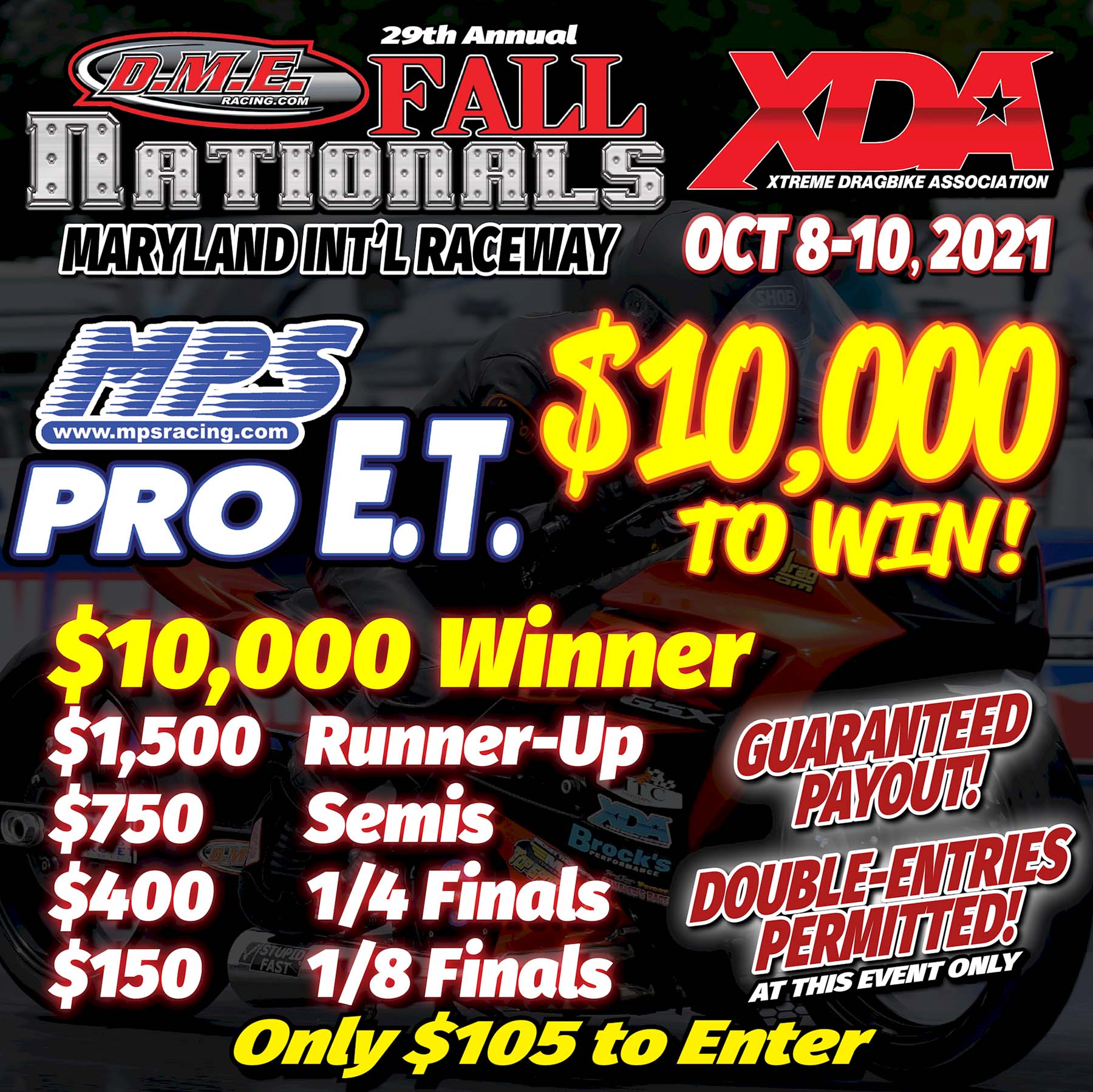 The vendor midway will be full of great deals on motorcycle parts, accessories, and apparel. And the corn-hole tournaments are still the place to be on Saturday night at the track.

Next weekend the Orient Express Pro Street class will turn up the dial on the country’s quickest and fastest 650+ horsepower Pro Street motorcycles. For the last nine years, the Pro Street championship chase came down to the season’s final event. But Rodney Williford has put an end to that streak by clinching the championship at the Bike Brawl earlier this month with a 206 point lead over #2 Justin Shakir. Jason Dunigan, Greg Wallace, and Gaige Herrera follow to round out the top five in points. 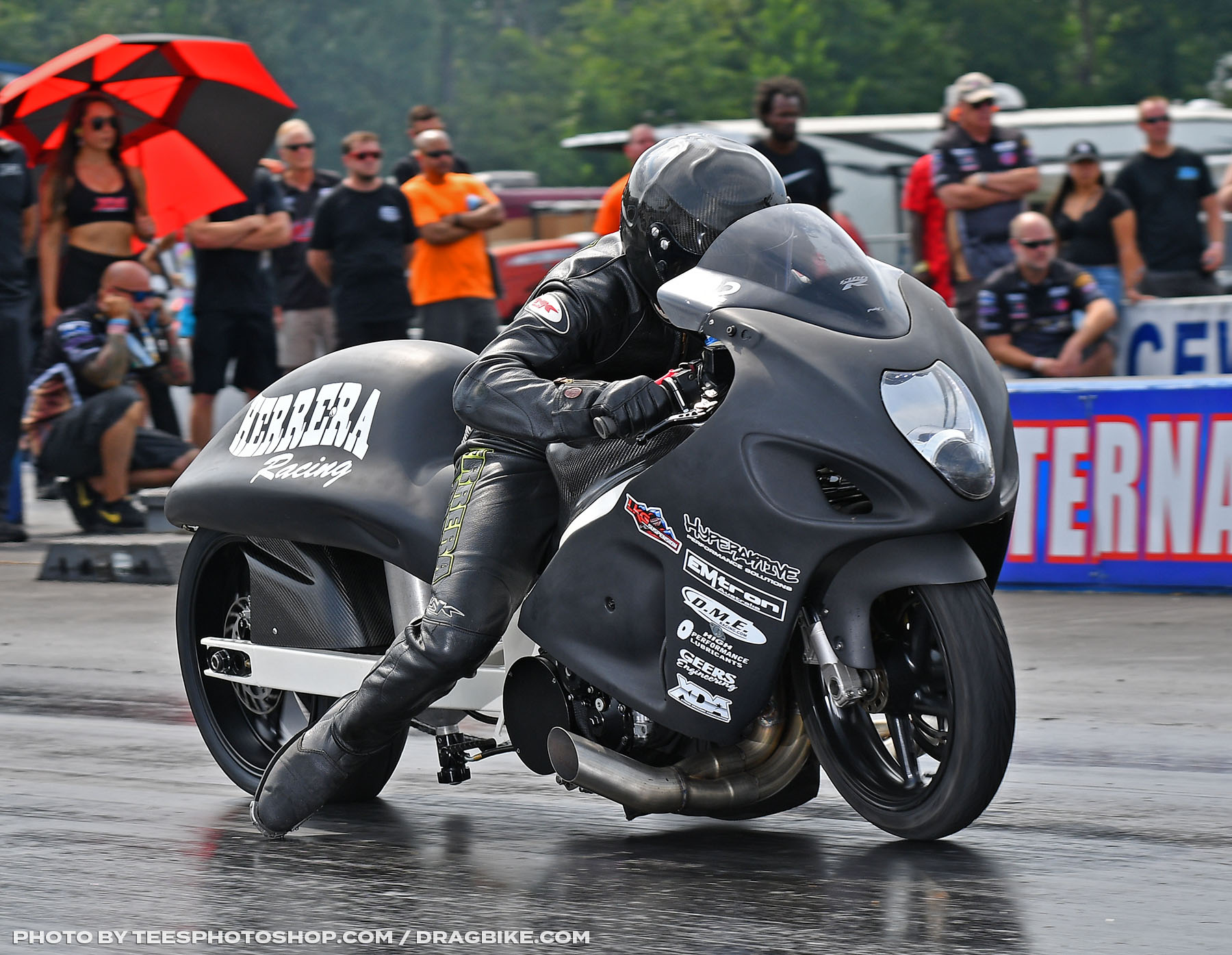 And just because the championship has been decided, that doesn’t mean the battle is over. Pro Street racers will also be fighting for a top ten finish to qualify for the chance to compete in front of 40,000+ fans at the 25th annual Haltech World Cup Finals presented by Wiseco on November 3-7, 2021.

The exclusive Platinum General Services Pro Street Shootout at WCF offers a $5,000 to win purse. The top four riders are already locked in for a spot, while eight other racers will battle it out for the remaining six spots.

Darion Payne who currently sits in the #8 spot for WCF, is in serious jeopardy of being bumped out. Payne will miss the XDA finals to celebrate his wife Tonisha’s birthday. “Making my wife happy is worth it,” was Payne’s response when we asked him about potentially missing the WCF event. 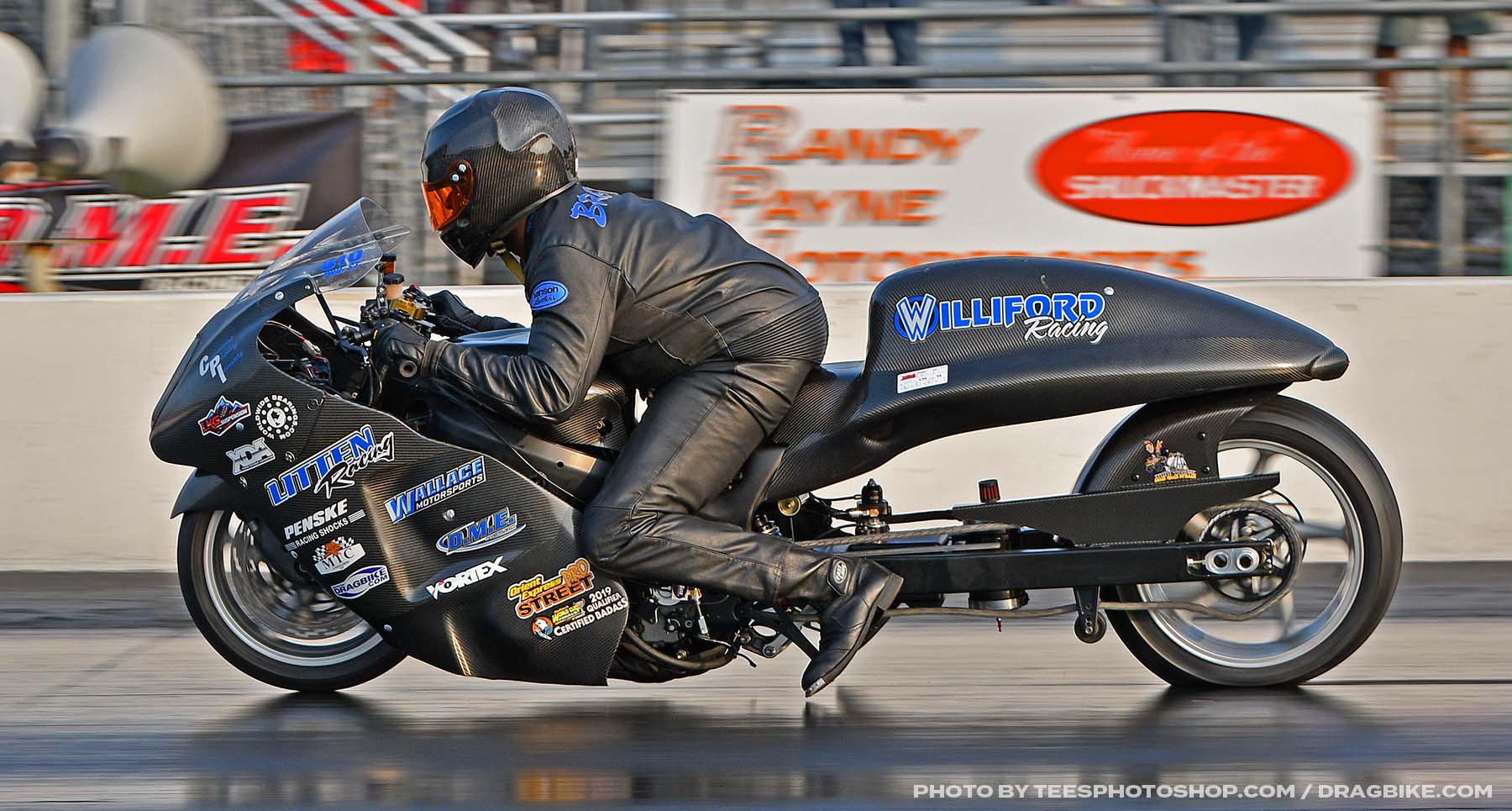 Kenny Brewer, Jamie Lopes, Curtis Brown, Ryan Bonitatis, Ricky Wood, and James Waugh will be ready to capitalize on Tonisha’s happiness as they battle for one of the remaining spots.

XDA is also looking forward to seeing the Midwest racers of Brett Ware, Brad Christian, Rudy Sanzottera, and Jamie Hendricks at the DME Racing Fall Nationals for the first time this season.

The DME Racing Real Street class will be a pressure cooker as Mark Hylton and David Stewart battle for the championship. Hylton currently has a mere twenty-point lead on Stewart. Stewart has had three wins this season, and Hylton has had two. These are two well-matched competitors as the season finale approaches. 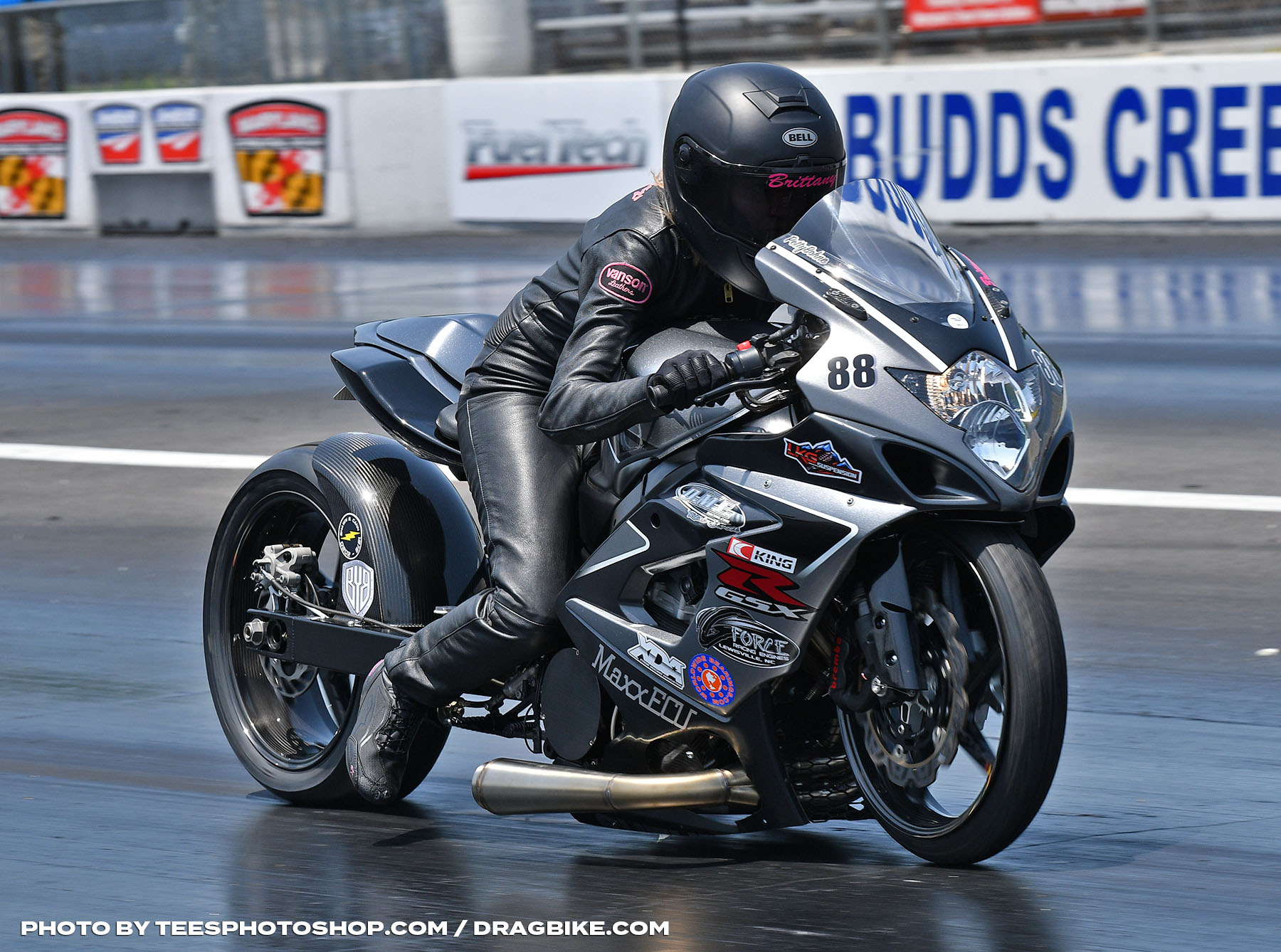 Brittany Bohne is in her first full season of Real Street and will finish in the top five in points. She is currently holding on to the #4 spot, one point ahead of Ralphie Navarro.

Another rookie, Trevor Schnitz, will finish in the top of ten for his first competition season. This season, Schnitz took a runner-up finish and has also been a fierce contender in HTP Performance Super Stock and several sportsman classes.

Real Street is a great class to make that next step if you are looking to enter the Pro ranks. Make plans to be at MDIR next weekend.

The HTP Performance Super Stock championship is also locked down by last year’s champion David Fondon. Fondon won the 2021 inaugural season by a respectable sixty-three-point lead. And this year, he is crushing the class with a 347 point lead! And the credit all goes to Fondon’s riding ability because he has taken wins on three different motorcycles this season. Fondon has ridden a Kawasaki ZX-10R, a BMW S1000RR, and a Kawasaki ZX-14. It has been impressive to watch Fondon at work this season. 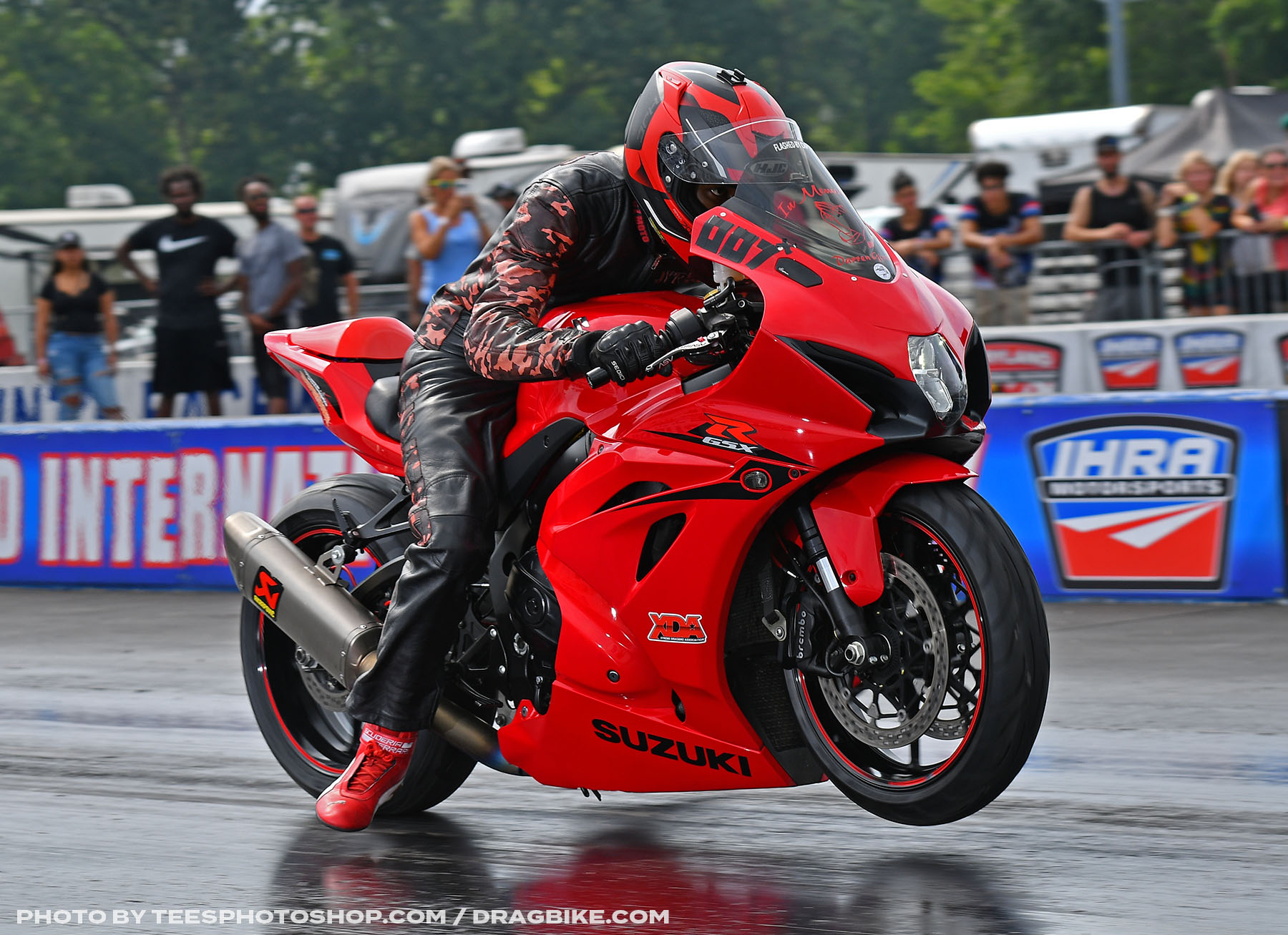 Jy’rec Givens and Mike Davis are both sitting tied in the #2 spot. Along with Curtis McDougald and Derek Sobiech, these four will be battling for the second-place spot next weekend. Last year Givens finished the season in the #5 spot, so he would like to improve this year and hold onto that #2 position.

We are in the third year of the eighth-mile heads-up class of MaxxECU Pro Xtreme featuring the Turbocharged, Supercharged, and Nitrous Injected wheelie-bar drag bikes. Kevin Clarke and Travis Davis are the previous class champions and will be joined by Chris Garner-Jones as the new class champion.

Jones has already clinched the 2021 championship with a one hundred and seventy-eight point lead. This year, Jones also reset the ET record with a 3.897 pass at the Platinum Fleet Repair season opener. Out of the six races already contested, Jones has taken five wins. So regardless of what happens next weekend, it’s been a good year for Jones. 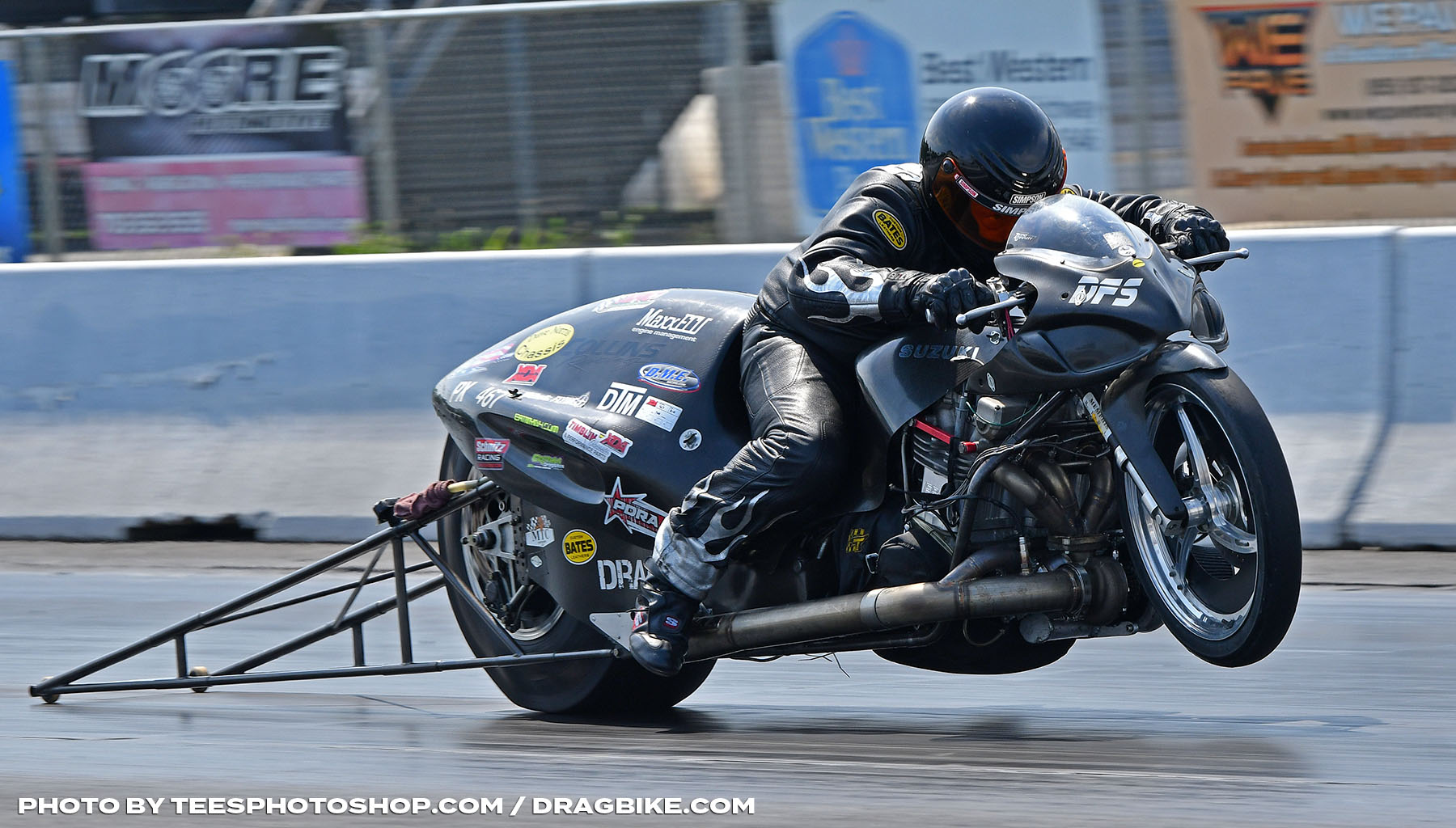 John Collins sits in the number two spot, and Rob Garcia is the only racer who can take that away. But what we really need to watch for next weekend are the performance numbers. With the fall air setting in and the first October race for XDA, the stage is set for real performance numbers.

The HTP Performance Grudge classes will be hooking up at the finals with their last chance to earn points and flex their performance on the best-prepped grudge surface around. Saturday night will be electric as the XDA Bull riders turn on win lights as they attempt to earn a few more points for a championship.

APE Nitrous Bulls is the only grudge class that already has the championship determined. Russell Dennison Jr on ‘Jimmy Hendricks’ tuned by Dave Norris officially locked down his 2021 championship at the Bike Brawl. In 2019 Dave Norris won this same championship on the very same bike. This team will still be looking for real competition next week while they celebrate success. 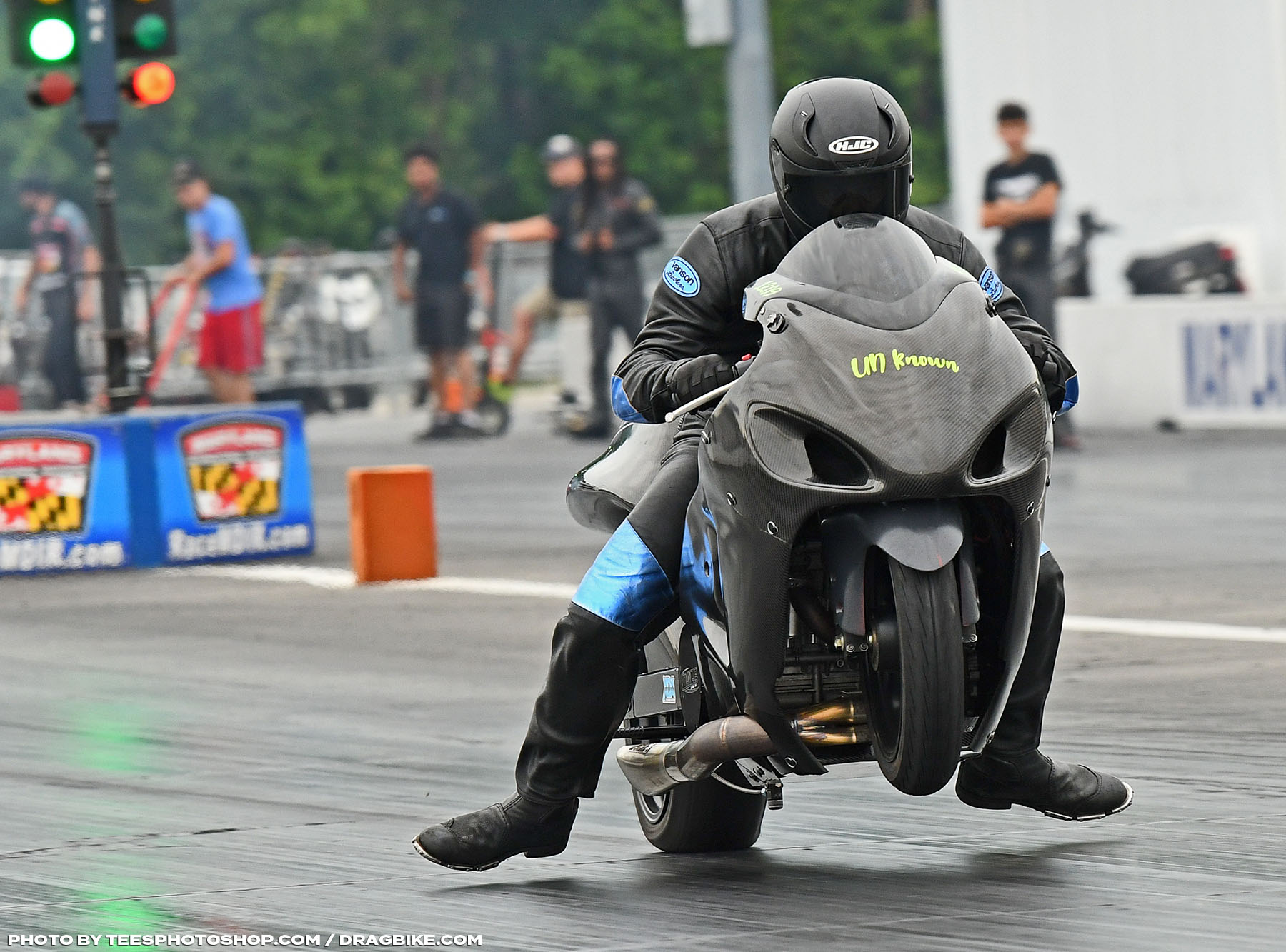 The 3 Sixty 5 Monster Bulls championship is wide-open. The 2020 class champion David Page on ‘Pickin Pockets’ leads the class by three points. David Martin and Jason Herron follow Page in points, but all three competitors have an equal chance to win the championship next weekend. For the past three years, Martin has been one step behind Page in points, so next weekend, he will need to hit the override button if he wants to finally get out in front. 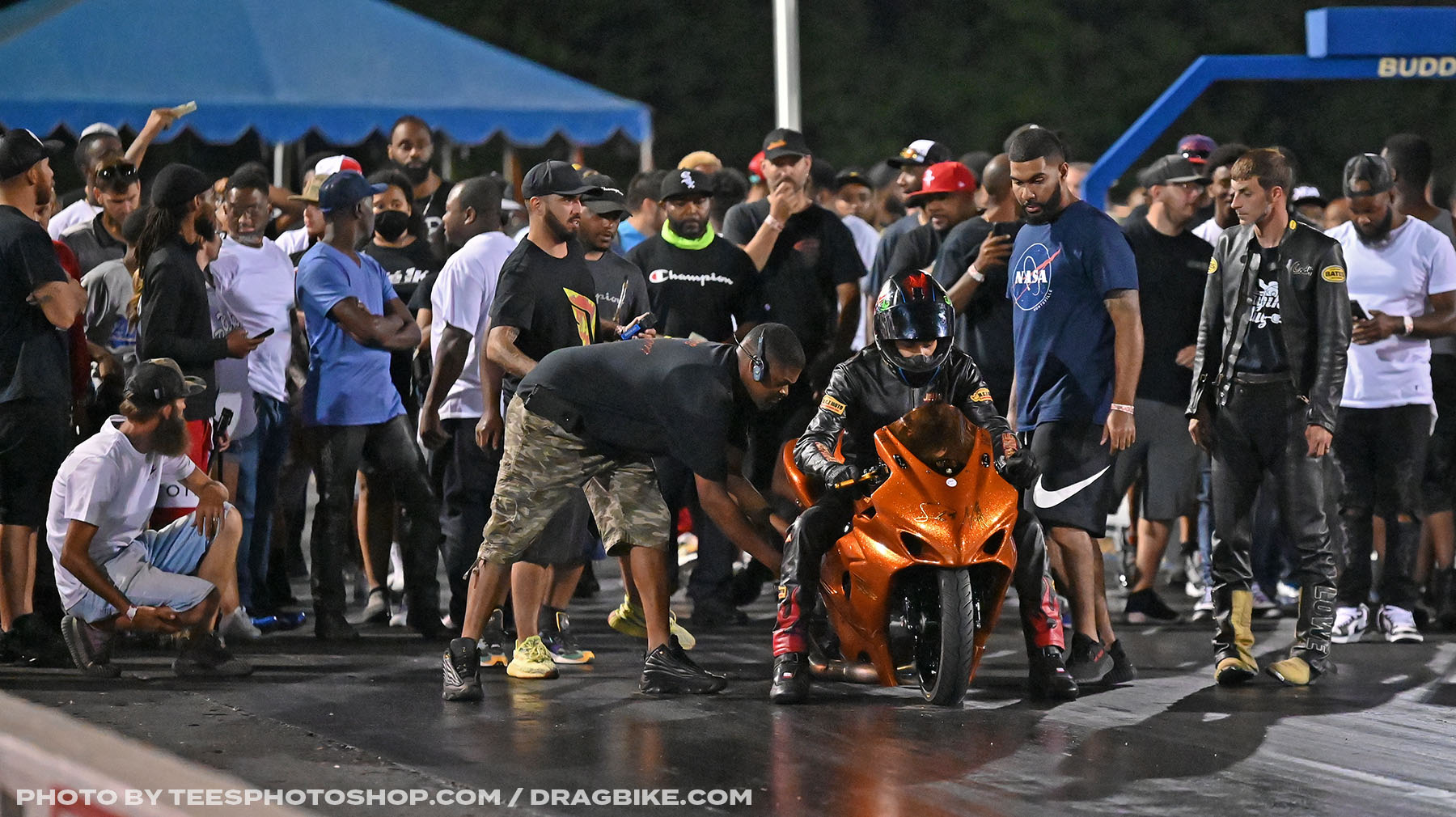 The inaugural season of Tommie’s Motorsports DMV Bulls has been a success with twenty-nine riders showing up to play games. Duane Jackson on ‘Miss Behavin’ has a six-point lead over the class. But the top five riders in points all have a chance to win the championship next weekend at MDIR. Those riders include Geoff Godfrey, Cody Lowe, Desmond Spalding, and Edward Thomas.

The Vance & Hines 4.60 eighth-mile class showcases the fiercest Sportsman around. Their reaction times and their dead on eighth-mile times make them the most exciting sportsman class to watch from Friday through Sunday. And currently leading the helm is the 2020 class champion, Ronald Procopio. Procopio is presently leading by forty-one points over his seventy-eight competitors. 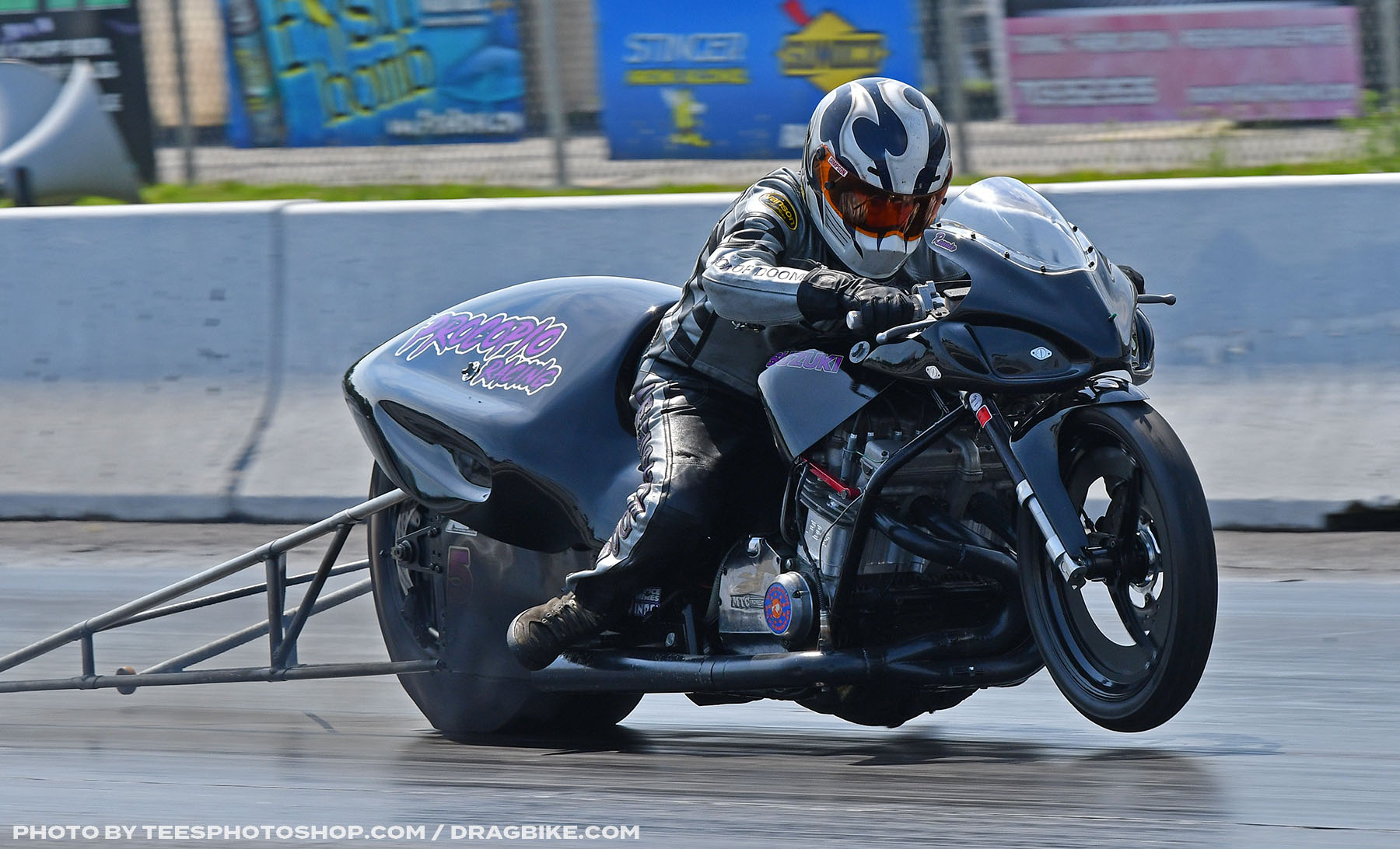 The top seven racers in the points chase still have a chance to knock Procopio out and take the throne. And six of those competitors have made final round appearances this year. Except for Broderick Jackson, so is Jackson due for a final next weekend? If Jackson takes his first win, and Procopio takes a round one loss, it will be the upset of the season! In this class anything and everything can happen come Sunday. Make plans to be there for the action.

The 1 Stop Speed 5.60 is led by Dustin Lee, who has officially clinched the championship to defend his 2020 title. With a two hundred and eighteen point lead, Lee can start the celebrating early while the rest of the class battles for a top ten plate. 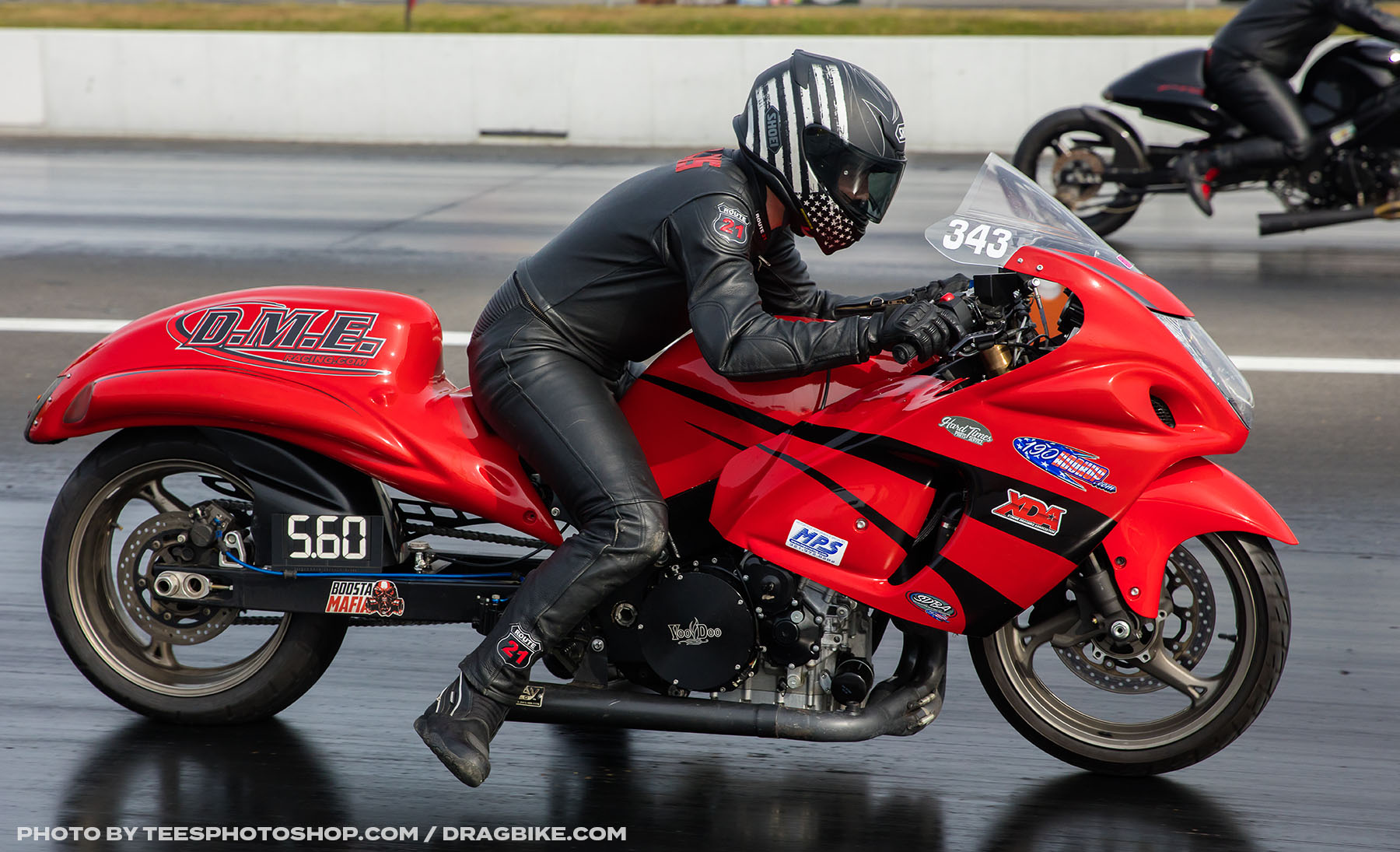 Carson Fields will be looking over his shoulder as he tries to hold onto that #2 spot. Nick Noble, Jimmie Miller, Nick Hamlet, and Duane Jackson are in striking distance to take Fields out of the #2 spot.

Barry Pryer Sr sits seventh in points but has been on a winning hot streak; another win could land him the number two spot. The Sunday battle in this eighth-mile class will be a furious fight from the starting line to the 660′.

Mickey Thompson Top Sportsman will see the quickest sportsman racers on the property go to battle next weekend. Jefferey Santin’s points lead in this class has been shrinking and now only has the lead by one point. Six additional racers have the mathematical chance for the championship at the DME Racing Fall Nationals. Bobby Holland, Robin Procopio, Dustin Lee, George Shriver, Norman Teal, and Pablo Gonzalez are in championship contention. 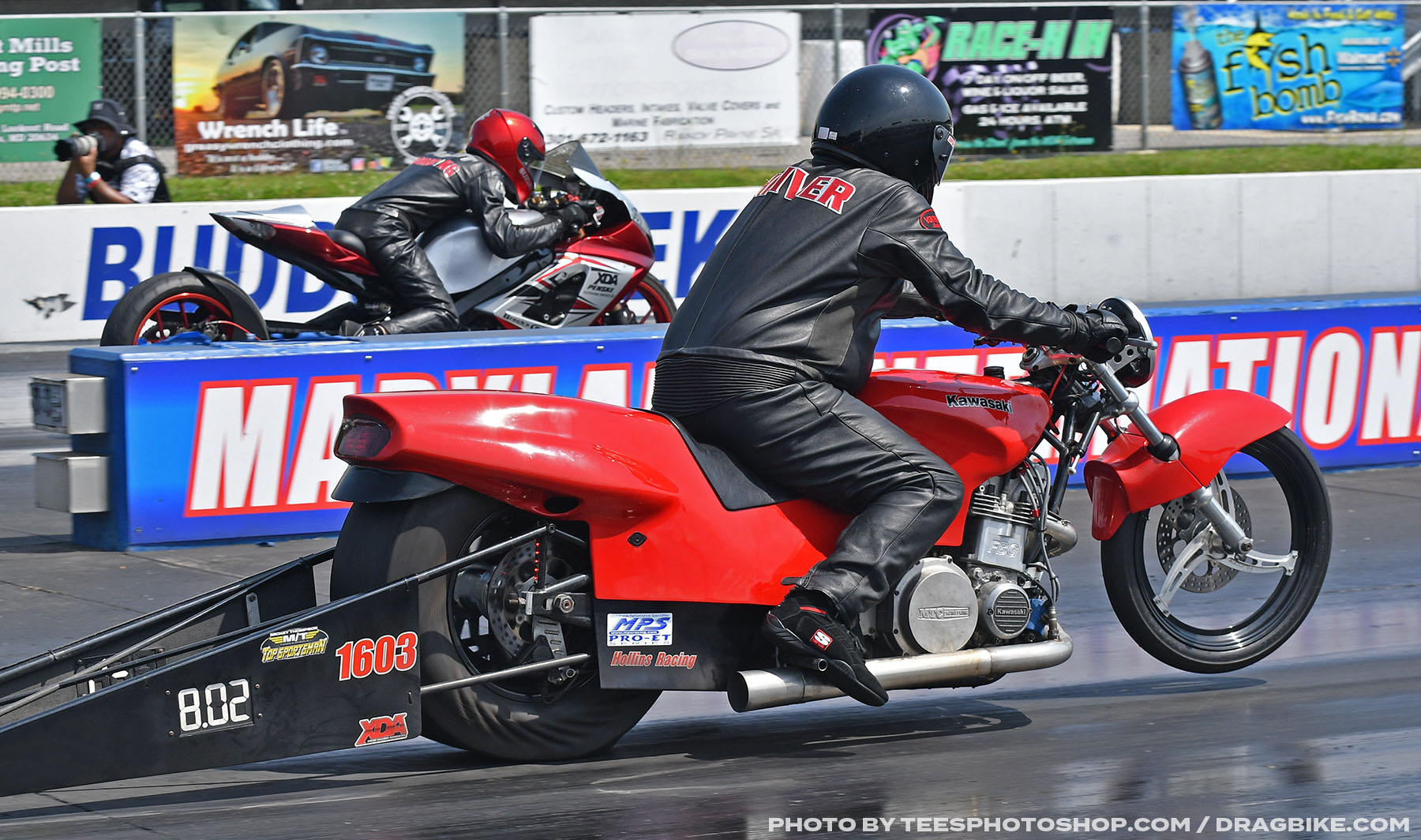 Procopio and Lee are both previous class champions and know the way to this championship very well. Gonzalez won the last two events and is on a hot winning streak; however, those wins were at Virginia Motorsports Park. Can he win at MDIR? You have to be there to watch the action! 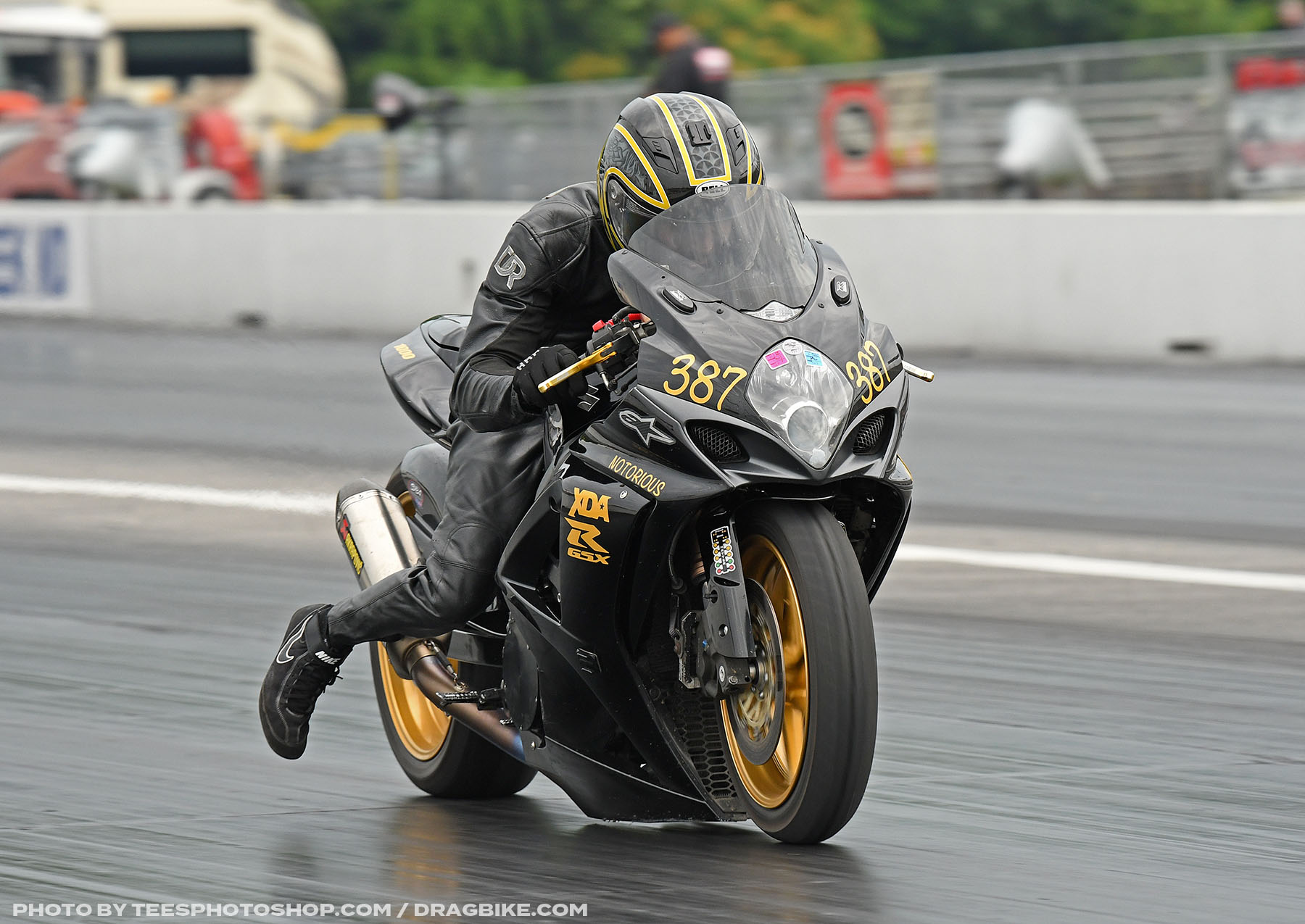 You have seen these names many times in the winner’s circle, which means next weekend is not going to be an easy task for Santin. It’s going to be a slugfest at the DME Racing Fall Nationals in this category with $10,000 up for grabs that you won’t want to miss.

The Brock’s Performance Street ET class has seen close to two hundred riders, from the beginner to the seasoned racer this year.

The 2020 class champion Derrick Milbourne is on track to defend his title as he leads the class by eighty-two points. With an average of one hundred points to an event winner, only three racers are in proximity to dethrone the champ. Mark Blake, Patrick Farrow, and Louis Green Jr. all have a shot next weekend at the championship. 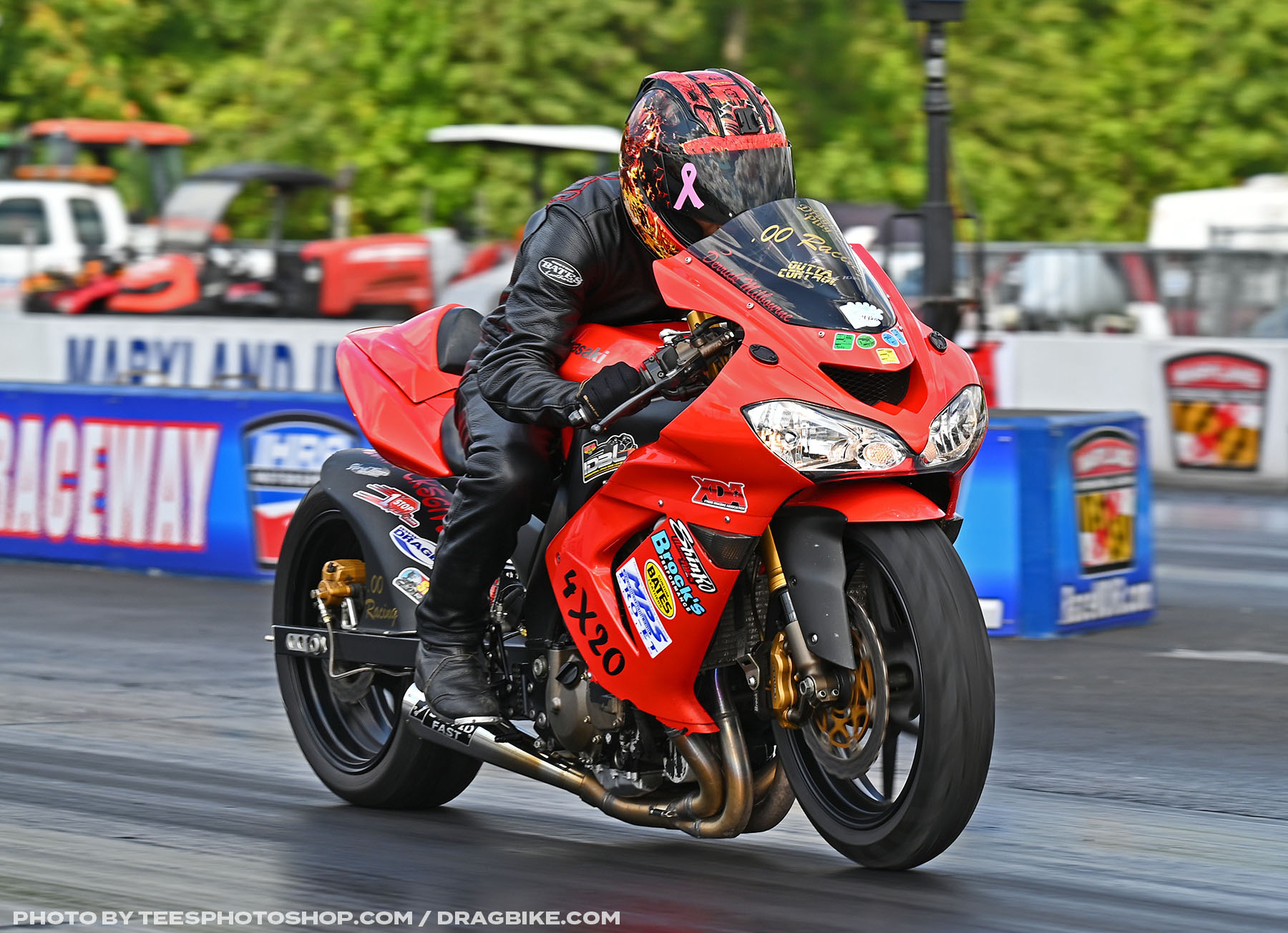 But don’t let a championship chase stop you from attending. For only $65 you can start a drag racing career with the best motorcycle drag racing sanction on the east coast.

Grab your family and friends and head to Maryland International Raceway next weekend for an exciting weekend of two-wheel racing action and history-making runs on October 8-10, for the 29th annual DME Racing Fall Nationals. XDA, it’s always the place to be!

XDA prides itself on having a close-knit group of racers. Below you will find a list of racers attending this event, along with links to class-specific groups that you can access to talk to other racers and get your questions answered. Together we are strong.