The current rules for the Pro Street and Real Street categories concerning the use of various data collection sensors and systems capable of being used for Traction Control (TC) and/or Wheelie Control (WC) have existed in motorcycle drag racing largely unchanged for more than two decades. When these rules were originally written, the use of such technologies was expensive and required an unusual skill set of electronics and controls, and therefore was not readily available to the average competitor. The large size of the electrical components required to implement such systems at that time made it an easy task for a technical department to maintain control over these devices, and rules therefore were written to limit their use in the best interest of maintaining a competitive environment for all racers.

But technology has changed that balance of availability vs. regulatory feasibility in this technical area. Aftermarket ECUs now come with much of the software already written for TC and WC. Production bikes are now beginning to leave the factory with TC and WC already in the factory electronics. The size of the components and sensors has shrunk many-fold, and the low cost and wide availability of small-footprint microcontrollers has changed the landscape of do-it-yourself electronic control systems. The small size of such systems has resulted in a circumstance where tech departments no longer have the resources or time to properly inspect class entrants for their use. We would also have to cut open wire harnesses to find such devices. The combined effect of low costs, small packaging, and technical departments fighting an increasingly-losing battle trying to regulate them has resulted in a large temptation by racers to consider the use of such illegal systems on their motorcycles. 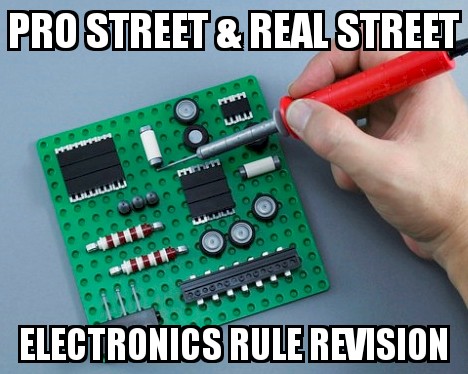 So, this has put the current sanctioning bodies in motorcycle drag racing at a crossroads. The one thing that should never be in a rule book is an unenforceable rule. An unenforceable rule is not fair to the racer that chooses to race legally, all the while knowing that other racers will not use the same level of integrity when choosing how they will race. Almost every other sanctioning body in every form of heads-up drag racing gave up trying to control these devices at least a decade ago, and they have seen no long-term negative effects from allowing these devices in their racing programs. Thus, considering all of these factors, Jason Miller from XDA, Jay Regan from Man Cup, and Brian Welch from NHDRO have jointly decided that it is in the best interest of competitive equality that all such restrictions on devices be removed from the rule book. Therefore, effective immediately virtually any sensors including front wheel speed sensors, ride height sensors, gyrometers, and anglometers will be legal in all Professional classes of racing at XDA, Man Cup, and NHDRO. An updated rulebook is now available.

We realize that this will be concerning to many racers, fearing that these bikes will now become robots, fully controlled by automated computers. But observing cars in classes and sanctions such as X275, Radials vs The World, and PDRA shows this to not be the case. Despite having these technologies for many years, these vehicles still lose traction, still wheelie, and still have aborted runs. This proves the point that TC and WC don’t prevent loss of traction and wheelies, only a proper tune-up by the crew chief prevents these events. What TC and WC are able to do is to allow the vehicle to recover from one of these negative events more quickly, allowing the vehicle to continue the run with less loss of ET. All of our Professional classes still have class mechanical limitations such as weight, wheelbase, power, tires, etc. TC and WC will not significantly affect the ultimate performance of any drag racing vehicle, it just provides additional tuning tools.

Also, there is an update to the wording and structure of the clutch rules in Pro Street. We have had many questions concerning some of the particulars of the rules as written. With the allowance of air clutches in the new rule book, some of the old wording can lead to confusing, unclear, and seemingly contradictory statements to some readers. In order to better clarify things, a new section clarifying some of the terms used in the rules has been added as well as a few smaller edits. The intent and effect of the rules is unchanged, only clarifications of what was already written are included.

We would like to wish good luck to all racers this year at any series you are racing with!