Words and photos by Tom McCarthy

Sunday race day is very much the way of life for XDA racers. While some racing sanctions have decided to foster Friday – Saturday, two-day racing events, the XDA still believes in wrapping things up on Sunday. After four rounds of qualifying over two days, the Pro Xtreme racers were paired up for battle.

The first pair out, was Mike Chongris and Kevin Clarke. Chongris attacked the tree right away with a stellar .009 reaction time to Clarke’s .104, landing Clarke behind the 8-ball, buy .095 as the bikes left the starting line. 660 feet later, at the 1/8th mile finish mark, Kevin Clarke had the quicker elapsed time with an 3.929. His slower reaction time at the tree gave Chongris his first victory of the day, on his march to the winner’s circle. 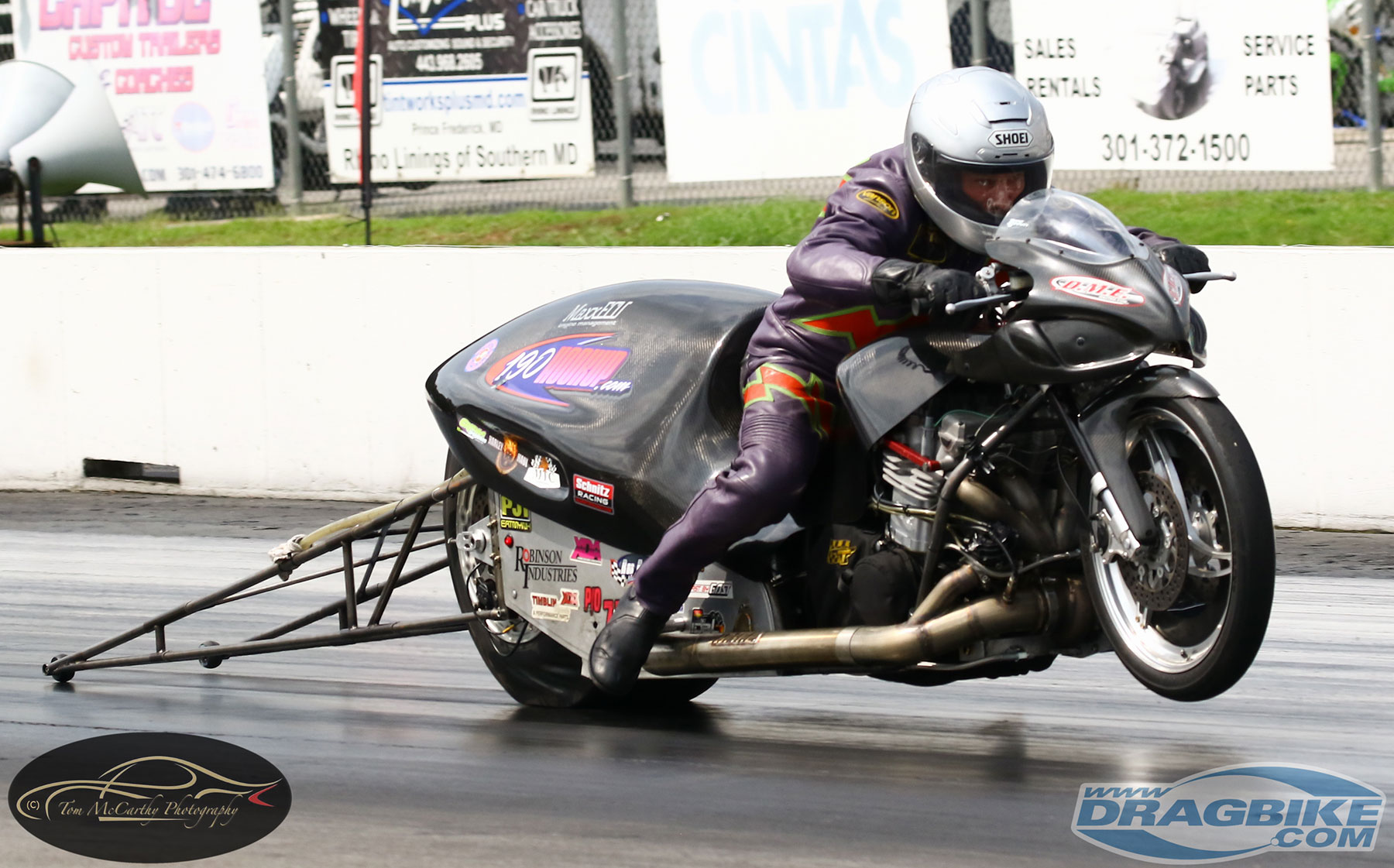 Shane Eperjesi faced Chris Cutsinger, the number two and nine qualifiers in the second pair out. Cutsinger was first off the line with a .086 to Shane’s .141, and the powerful Grothus Dragbike ran away from Cutsinger with a 3.95 to 4.53, sending Shane to the next round.

The third pair out was Rob Garcia, and Tommy Saxon. Knowing he needed a starting line advantage, Saxon went after the tree with a .08 RT, well ahead of Rob’s .104. And the race was on with Saxon in the lead early. But by the 330′ clock, Garcia overtook Saxon running a 3.926 to his 4.17, and Garcia advanced to the quarter-final round.

Travis hit the tree solid with a .029 to Collins’ .121 reaction. The two monster bikes sporting close to 800HP launched hard from the starting line. Collins was quicker in ET with an an 4.055 to Davis’ 4.133, but that Davis’s quick reaction time got him to the finish line first with a margin of victory of .014 seconds.

First pair out was Garcia and Davis. Garcia unleashed a .022 preceded by a fierce .019 light by Davis. While they stormed off the line as if glued together, something was not right with the Davis machine, and it fell off pace posting a 4.27 ET to Garcia’s victorious 3.96. 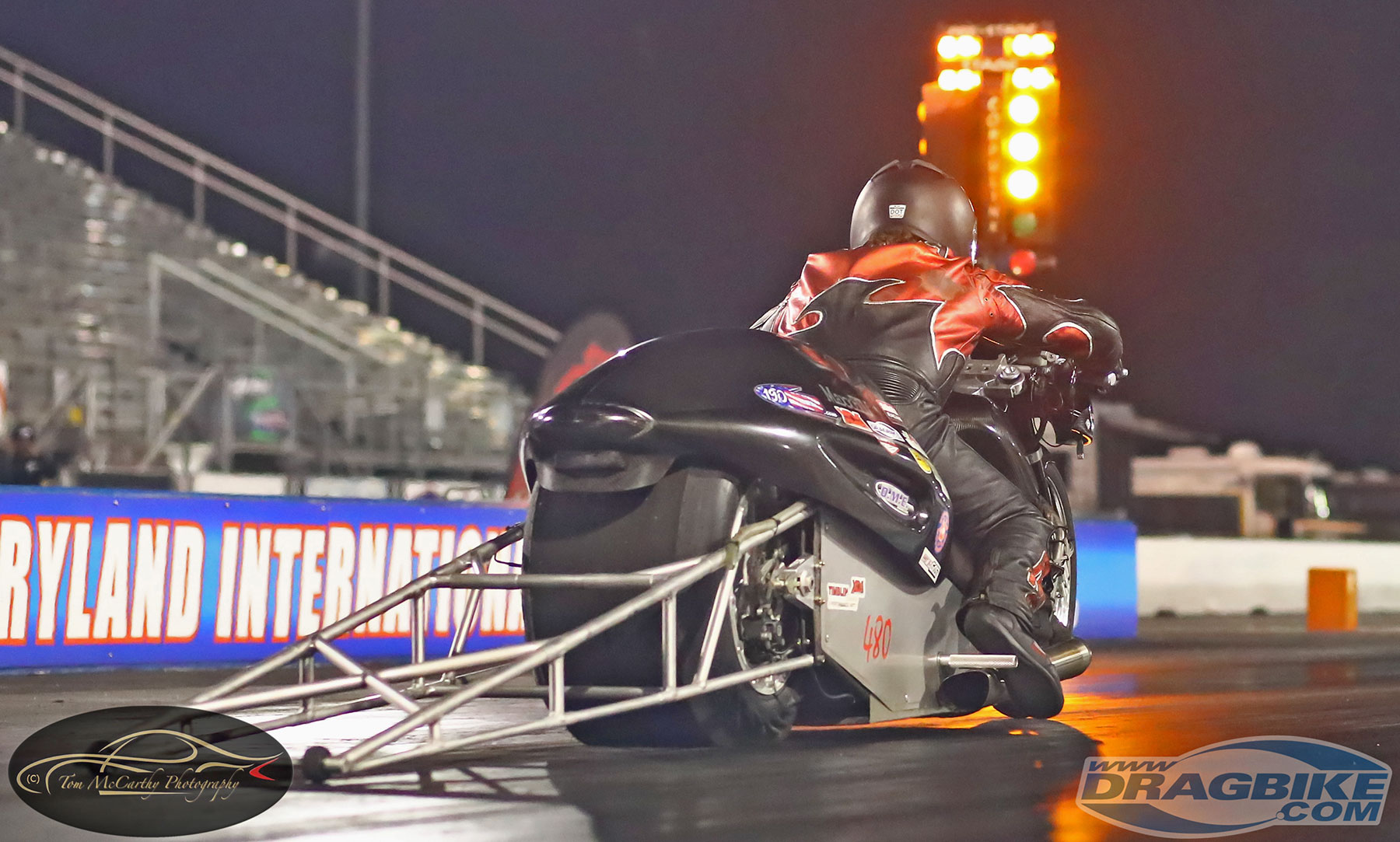 Next, Mike Chongris faced Billy Vose. Billy’s .065 was followed closely by Chongris’ .083, and they were wheels up, well past the 100-foot mark. When the front tires finally returned to the track, they ripped past the finish line with a quicker 3.966 for Chongris and a 4.013 for Vose.

The last pass was a full-on storming of the MDIR 660 foot racing surface by Shane “Showboat” Eperjesi as he clocked in with a 3.97 at 188.7 MPH setting the MPH Record. 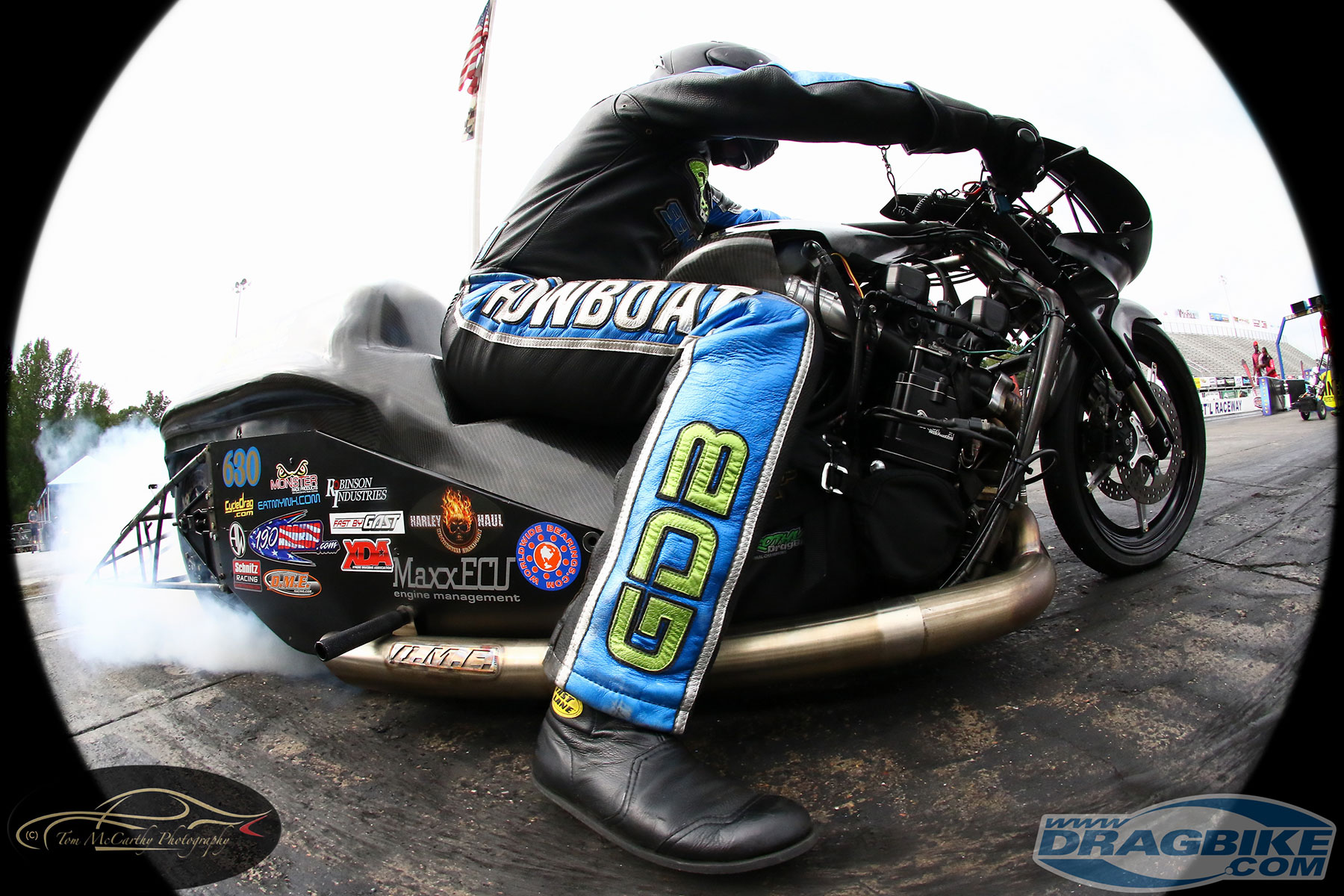 The semi’s was an “all eyes on” paring with Mike Chongris and Shane Eperjesi ready to duke it out for a chance to go to the final round. Shane Eperjesi was first to react with a .031 against Chongris’ .055. Eperjesi’s 3.98 was a great effort, but not enough to hold off the hard-charging Chongris, who motored past him with a 3.96 win. 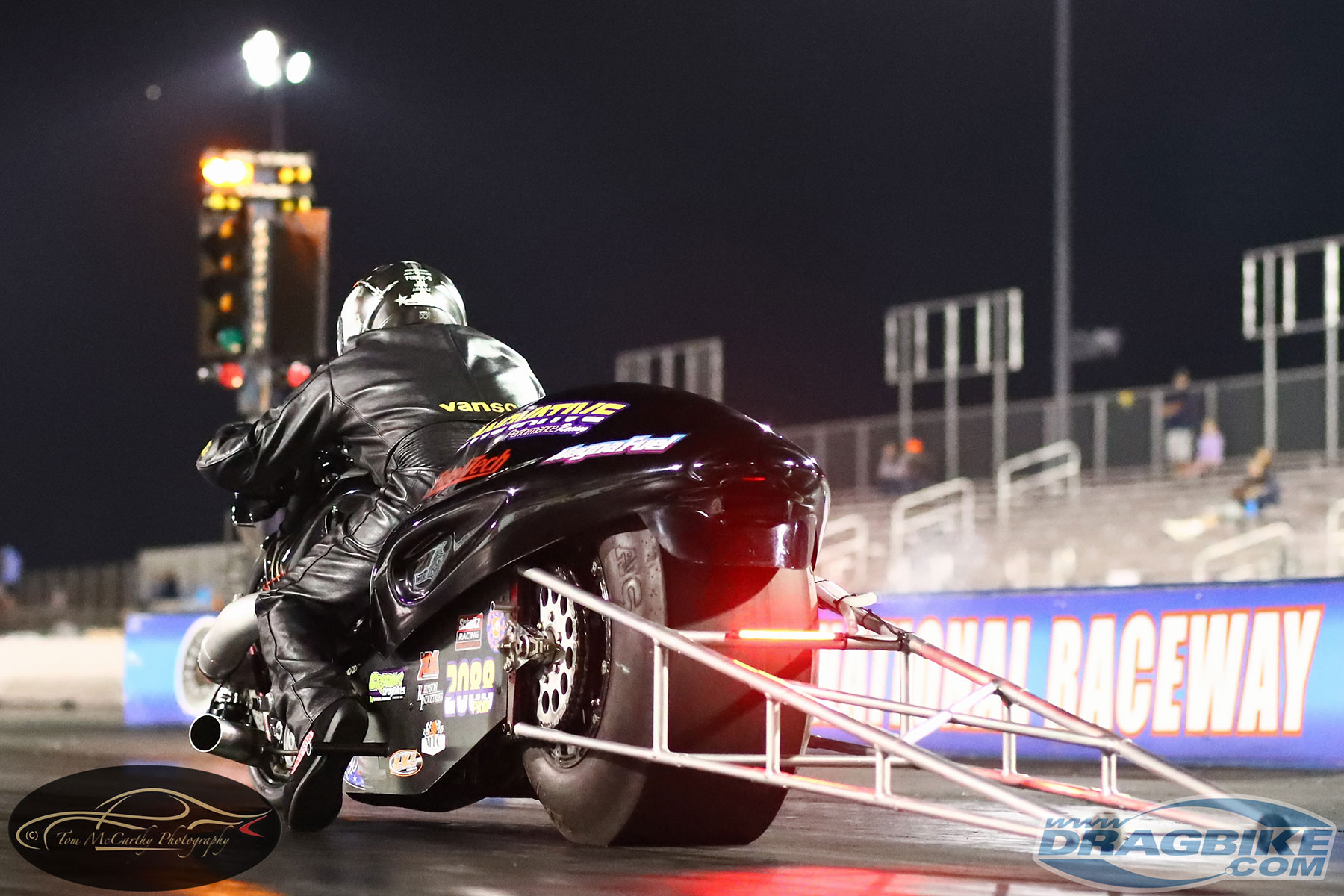 In the final round, late Sunday evening, the two warriors met up for the last battle of the day. Mike Chongris was first off the line with a great .031 RT to Rob Garcia’s .055 effort. At the finish line where it matters the most, the 3.93 at a thundering 190.35 MPH claimed victory for Mike Chongris over the 4.09 effort posted by Rob Garcia. Chongris’ 3.933 set a new ET record for the class. With Chongris taking the victory, this secured the championship for Travis Davis. 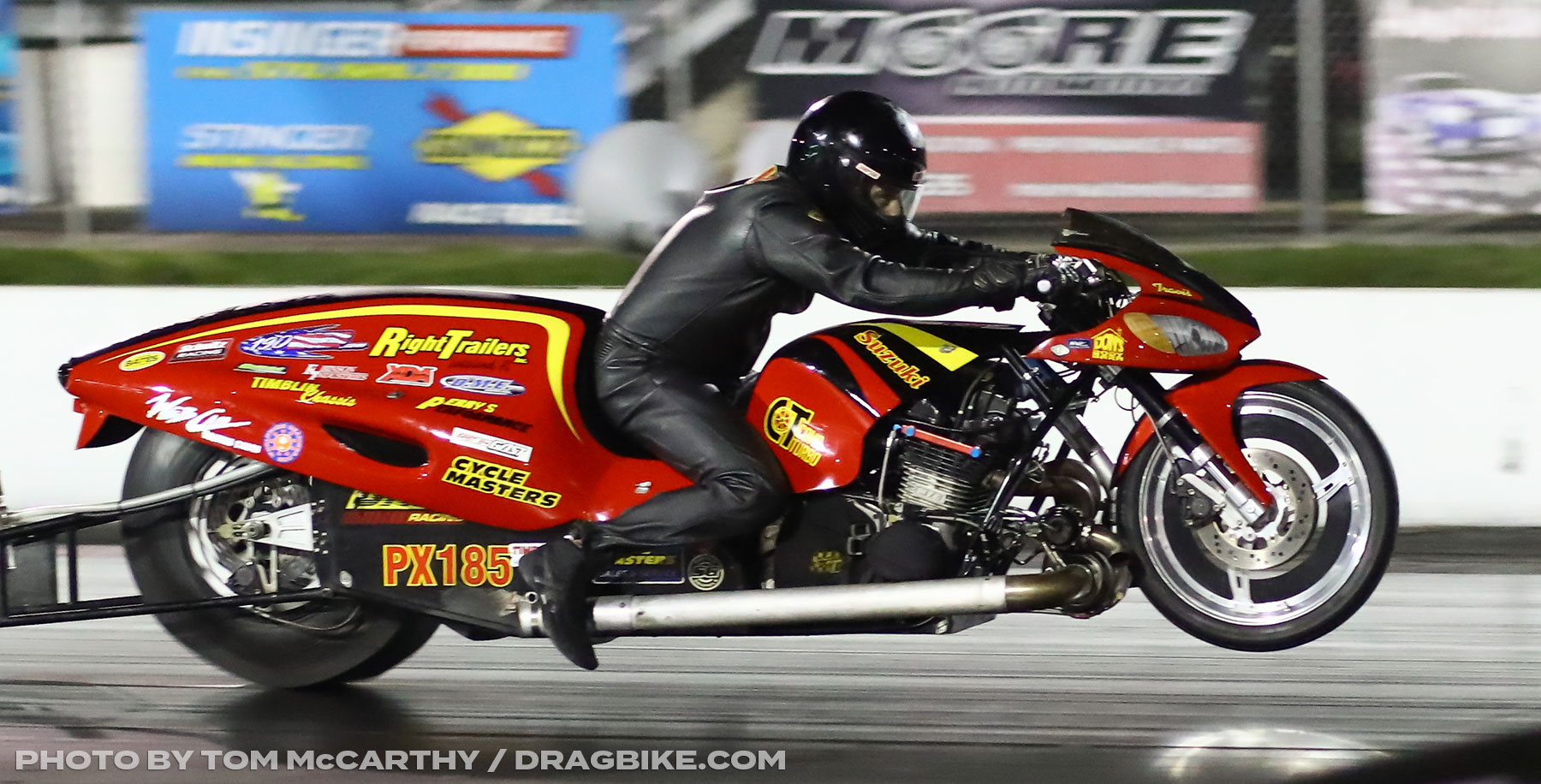 Pro Xtreme will return next season to a seven-race season in 2021 with three events slated for VMP competition and four events set for MDIR.

Don’t miss a weekend of racing with the quickest and fastest motorcycle drag racing sanction in the country; put XDA on your 2021 calendar now! 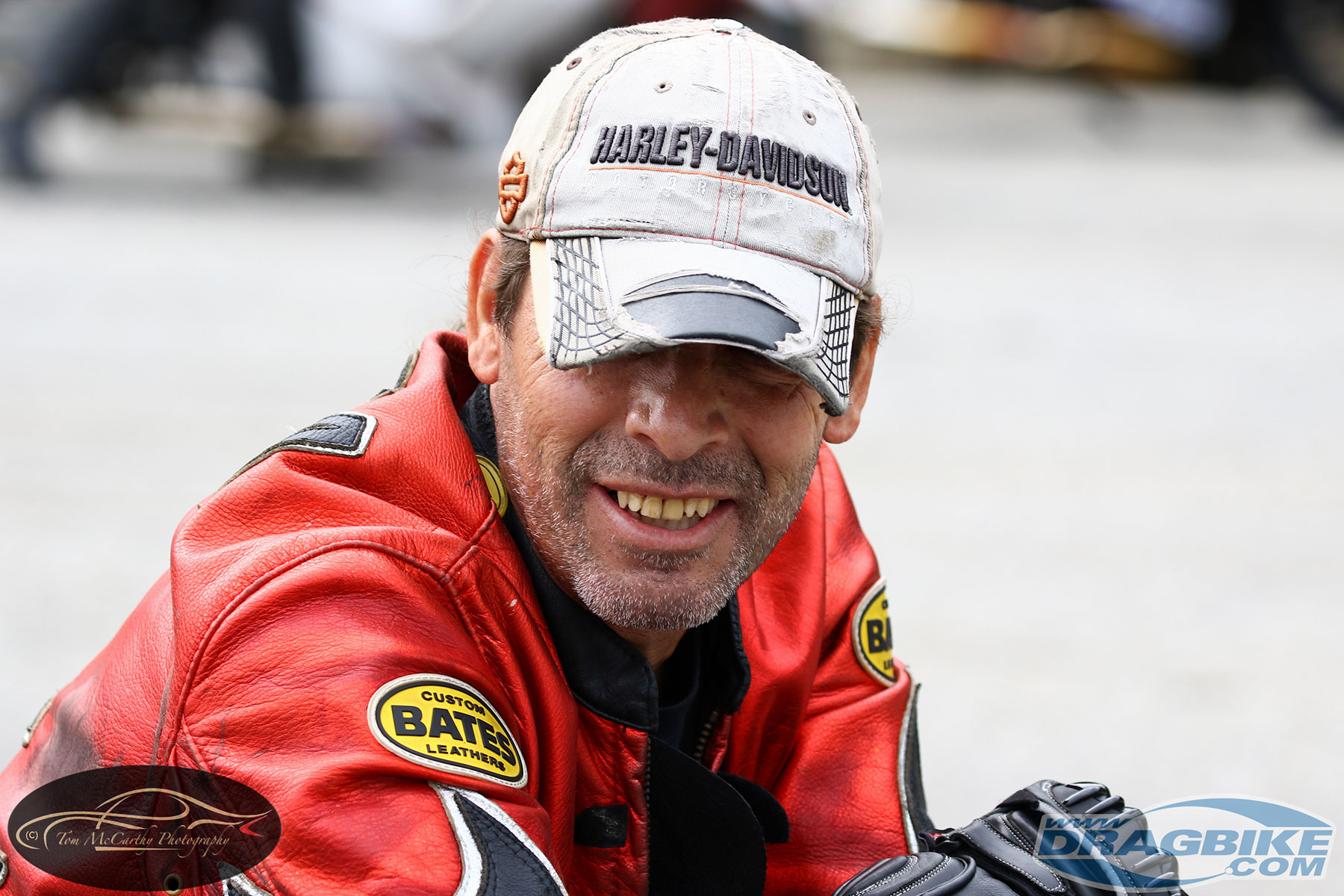 Pro Xtreme qualifying for the Fall DME Nationals began Friday night, under the lights at MDIR. With eight bikes ready to rumble, Mike Chongris of East Lake, OH was the first bike down the track with a 4.05 at 179 mph to begin the first four qualifying rounds.

The quickest of the initial session was Rob Garcia, of Pottstown, PA with an elapsed time of 3.98 at 184 MPH, and he was both the quickest and fastest bike on Friday night. Everyone knew that 3.98 was not going to hold through three more pro rounds of qualifying. However, it was still a very firm indicator of these big tire bikes’ level of performance. The remaining seven bikes from the first session were: Kevin Clark (4.03), Mike Chongris (4.05), John Collins (4.18), Billy Vose (4.24), Travis Davis (4.89), Tommy Saxon (4.93) and Shane Eperjesi (3.99). However, Eperjesi passed the scales and his pass was DQ’d. 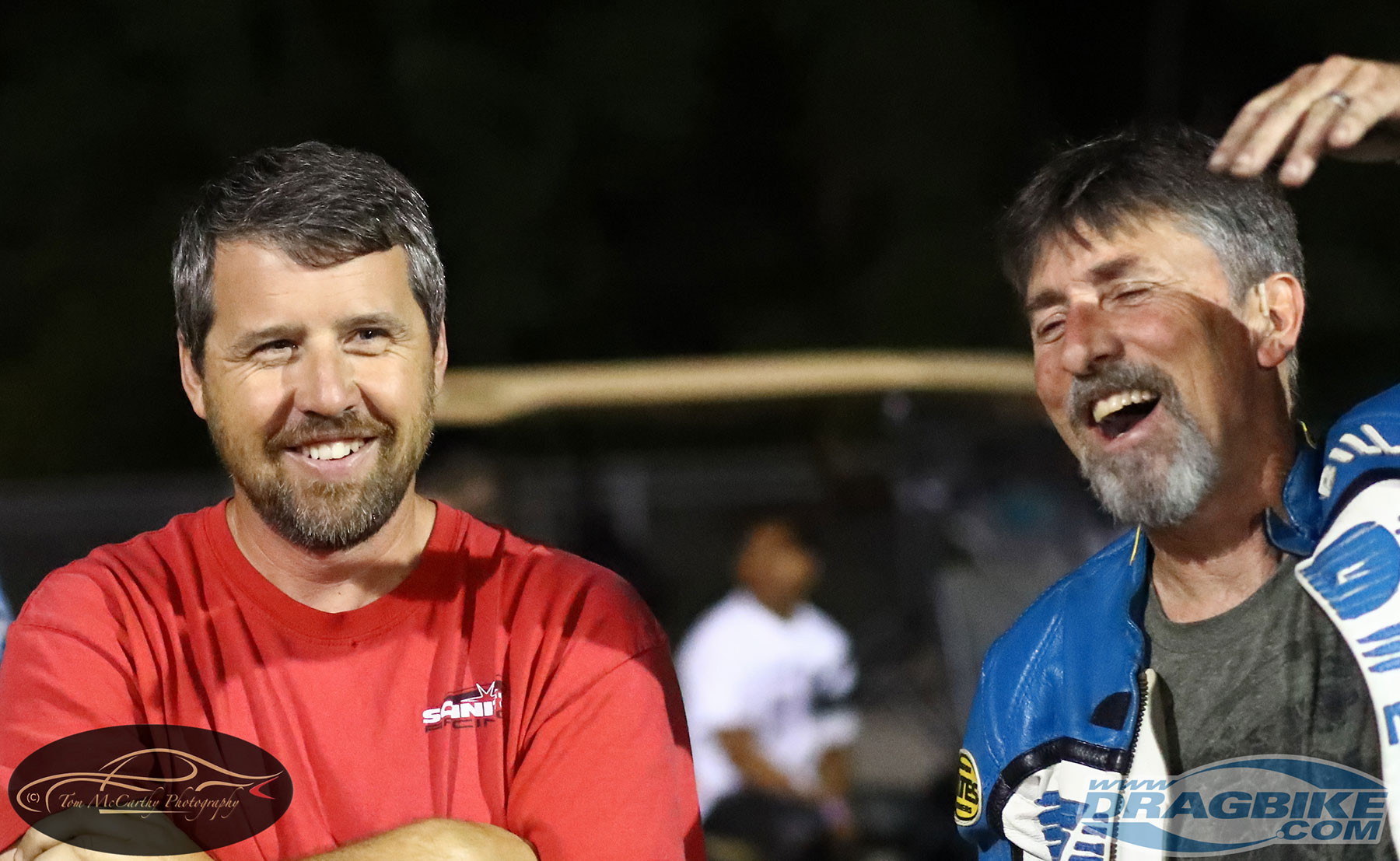 In round two of qualifying, Chris Cutsinger entered the fray, elevating the field to nine bikes in competition. Top of the list in qualifying after two rounds was Rob Garcia’s 3.98 still standing tall. The trailing nine bikes were: John Collins, improved to a 3.99, Mike Chongris improved to a 4.02, Kevin Clark (4.03), Shane Eperjesi 4.05 @ 183. Billy Vose 4.11, Chris Cutsinger 4.39, Travis Davis 4.63 and Tommy Saxon capped the list with his 4.93 as he did not make this round. 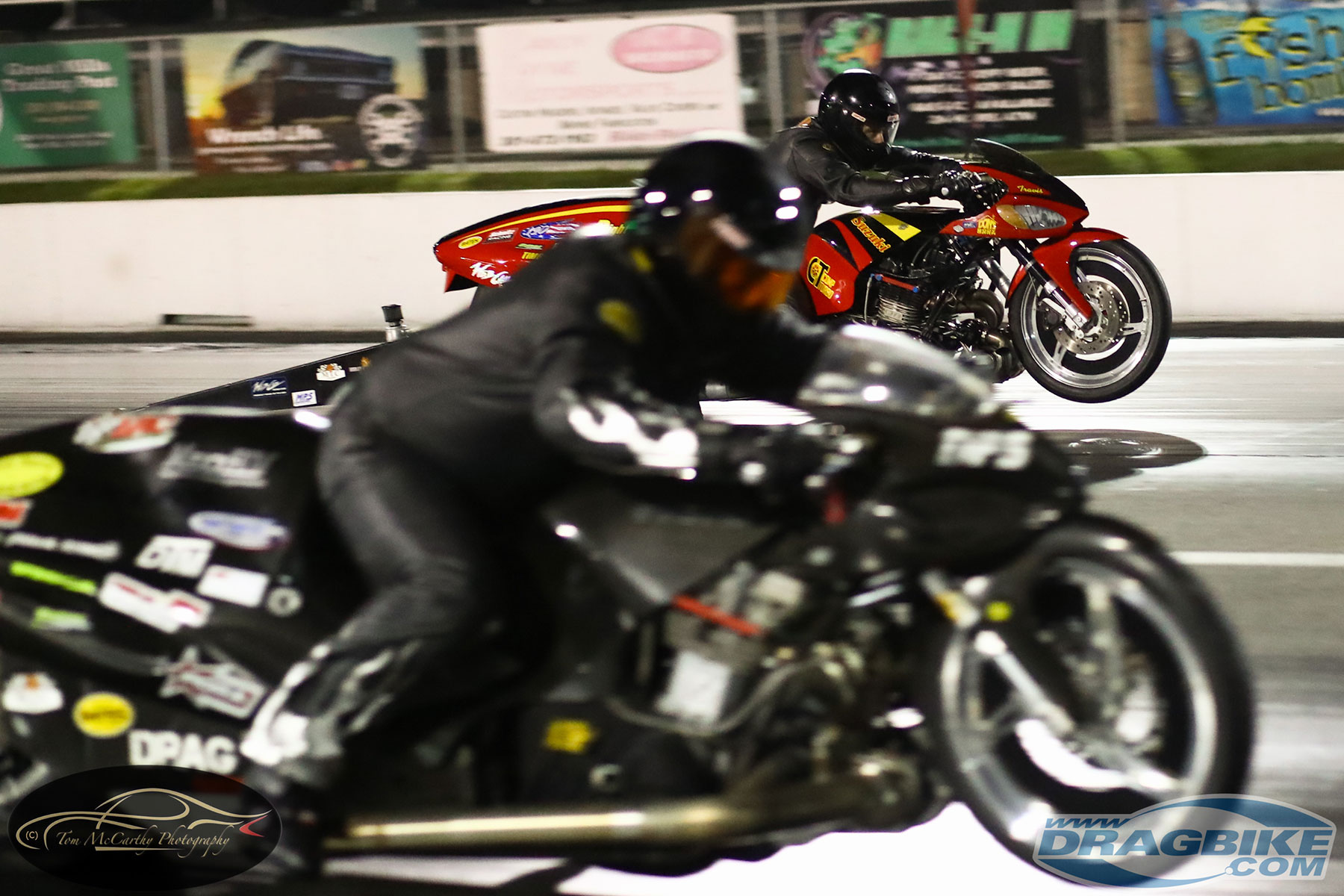 Round three of qualifying now became the round of importance when the bikes rolled into the lanes at close to 6:30PM as the sun began to set and the track was still holding the heat of the Fall day. A big shuffle of the deck happened here as the entire pack now had a few runs under their leathers and the boys were ready to brawl. 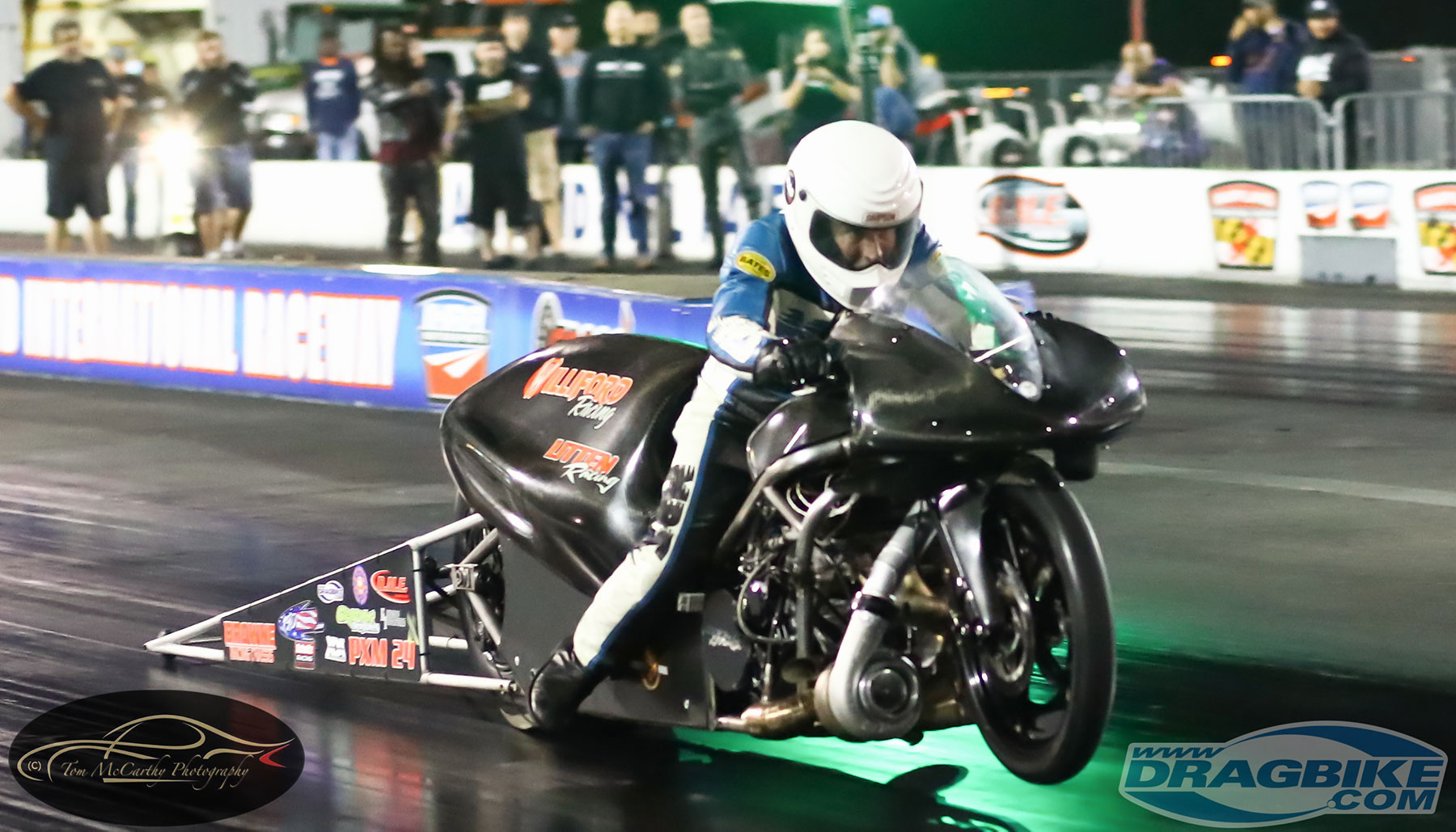 Billy Vose served notice he bought his A-game with and uncorked a stellar 3.903 @ 187 MPH to announce he was not playing this weekend. Mr. Vose knows where the power button is and when to use it. Under these track conditions, he took advantage of it and threw the kitchen sink to raise the bar a notch. Billy’s 3.903 was quite an eye-opener for all present. Considering the #1 qualifiers for the first two races of the 2020 season were 3.96 and 3.97, that 0 was an Oh-my-God moment for all concerned. Behind Vose the qualifying order now sat with Shane Eperjesi 3.95, Rob Garcia 3.97 and John Collins 3.99, Mike Chongris 4.02, Kevin Clark 4.03, Travis Davis 4.12, Chris Cutsinger 4.26, and Tommy Saxon 4.93. 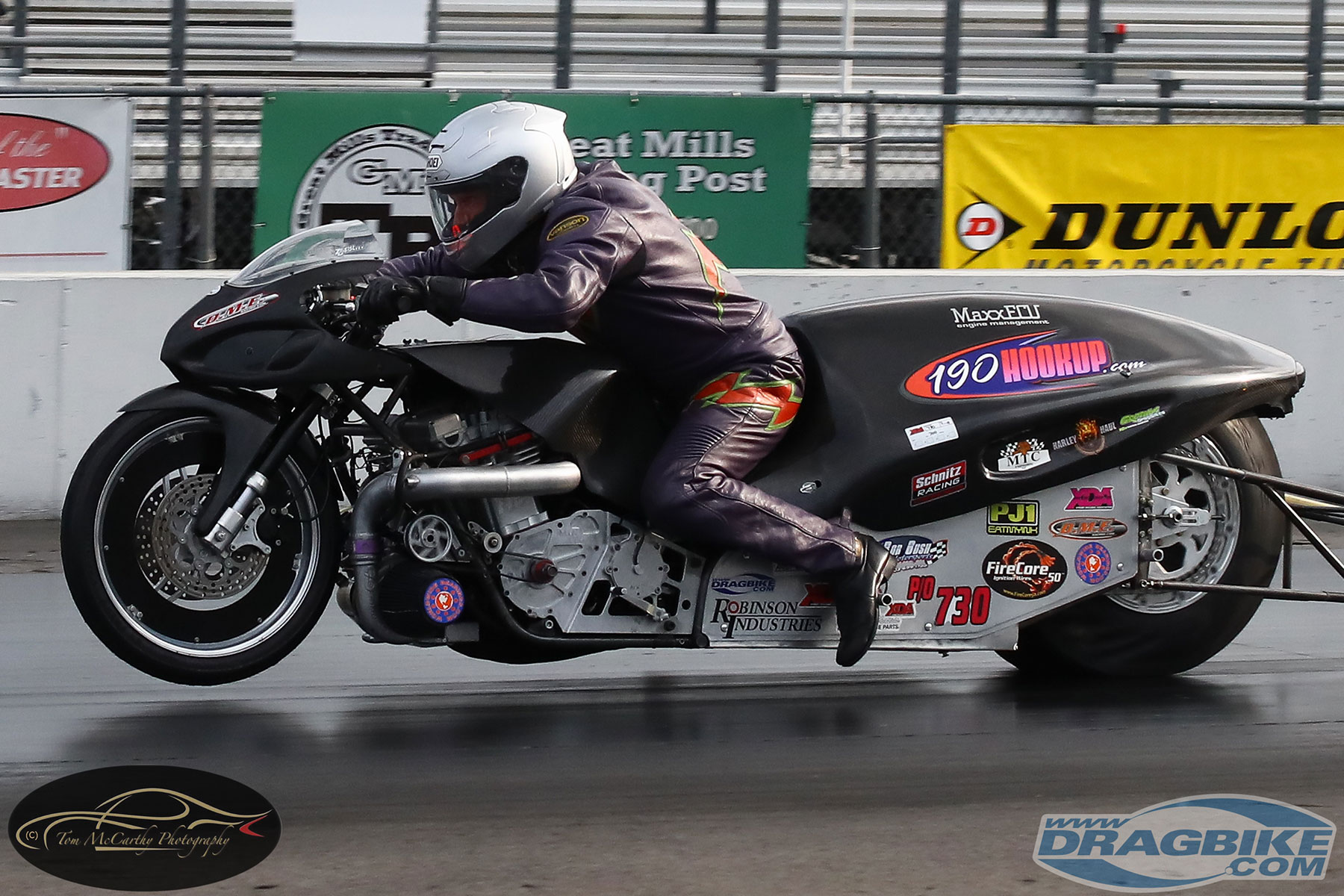 The fourth and final qualifier ran under the lights, and with cooler, denser air, and the heat of the day faded, some racers skipped this round. Billy’s 3.90 stood the test making him #1 qualifier for this big race and earned him a bye-run in round one of eliminations. 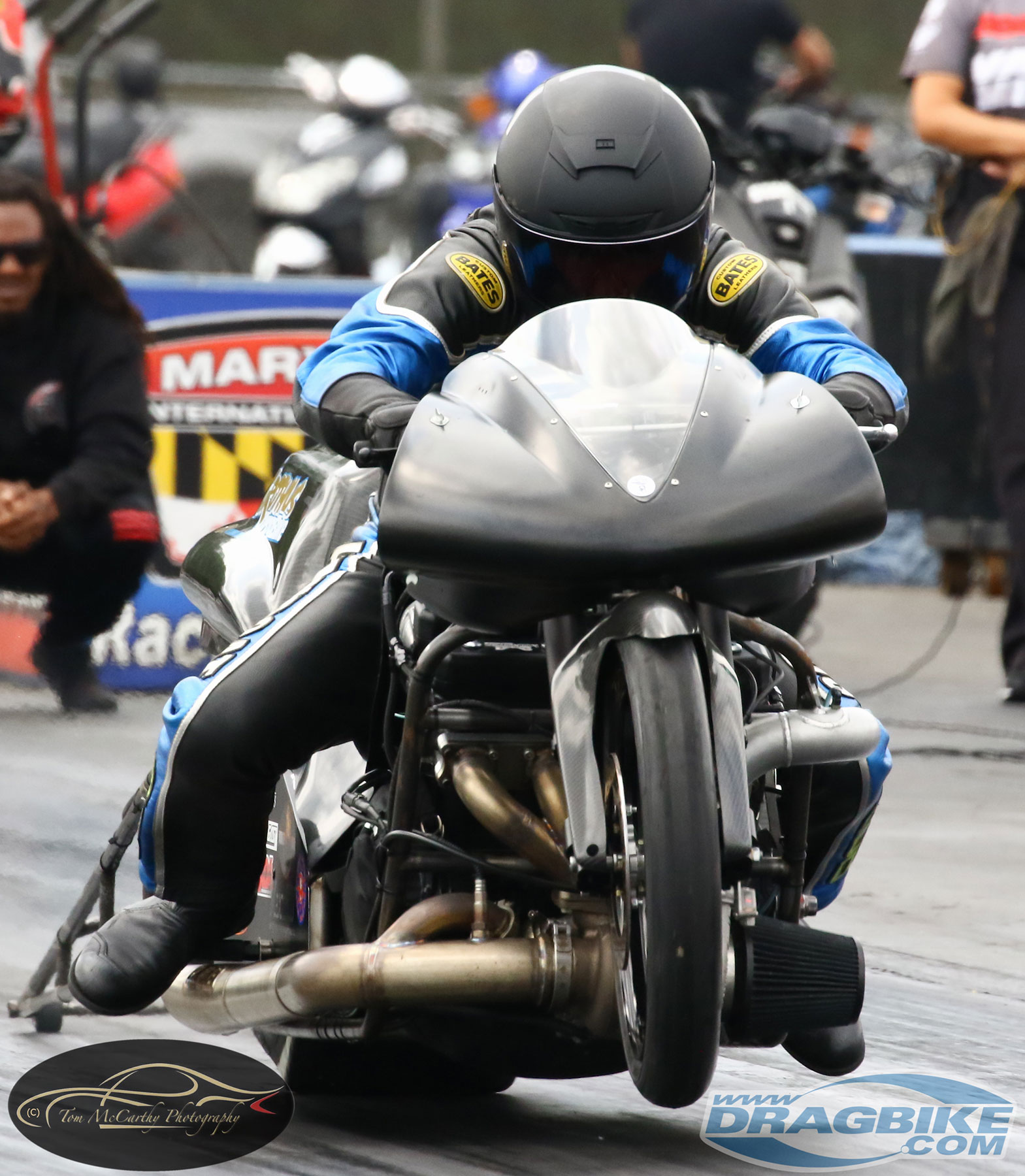 When eliminations begin for the Pro Extreme class on Sunday, Billy Vose will lead things off with the bye run, Kevin Clark will face Mike Chongris, Shane Eperjesi will take on Chris Cutsinger and John Collins will face the current point’s leader Travis Davis.

On Thursday, the racing rigs began rolling into Maryland International Raceway in Mechanicsville, MD, for the DME Racing Fall Nationals. This will be the final event of the 2020 season for XDA racers and the Pro Extreme class is most assuredly race-ready. 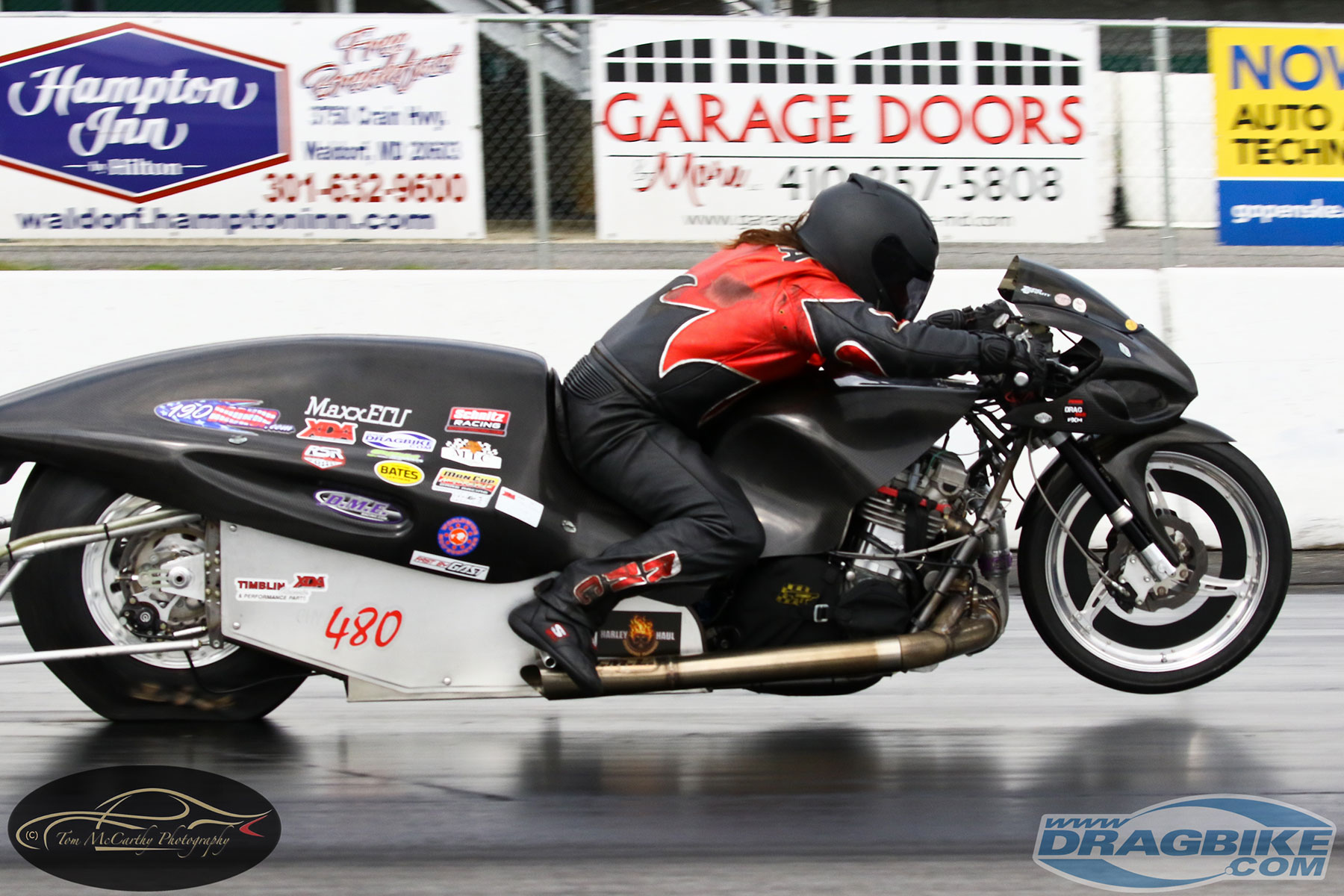 Travis won the first race of the season against Rob Garcia on a holeshot win with an .047 reaction time to Garcia’s .198

Davis then defeated Shane Eperjesi during the second race of this season with another holeshot victory. Davis cut a .015 light to Eperjesi’s .045, giving him the win with a 4.008 ET to Eperjesi’s 3.978. This win gave Travis the commanding points lead he holds over the field. 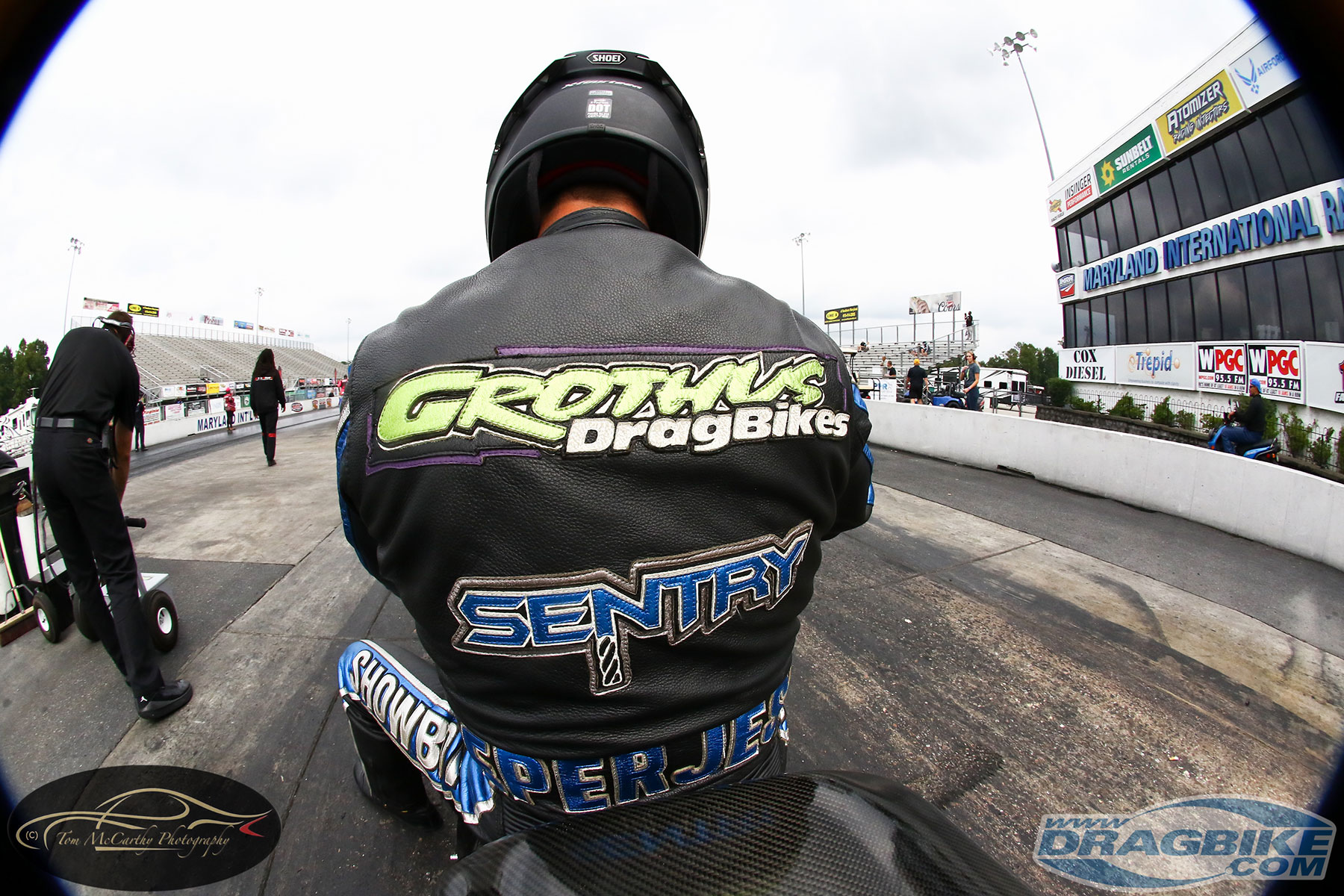 The number one qualifier at both events was Shane Eperjesi of Lake Dallas Texas. With a 3.969 @ 193.43 MPH and a 3.978 @ 187 MPH respectively. Rob Garcia, Kevin Clarke, and Travis Davis have also posted three-second performances in competition this year. This class exhibits great parity with very high performance.