This will be the third and final event of a shortened year of racing. With a pandemic sweeping the nation and mother nature being a cruel mistress, the 2020 drag racing season will be one no racer will forget. However, our XDA family has given their best to squeeze the lemonade out of this pandemic, with record-setting performances and turnouts, despite numerous restrictions.

This event features the Orient Express Pro Street class that run speeds over 230 mph in only 6-seconds! Over 700 Professional, Sportsman, and Grudge motorcycle racers will also compete all weekend long, battling it out for over $75,000 in cash purse.

Next weekend the country’s quickest and fastest 650+ horsepower Pro Street motorcycles compete for the crown. The Orient Express Pro Street class will compete in the 8th annual Battle Royale featuring a 32-bike field and a payout of over $13,000 in purse money. 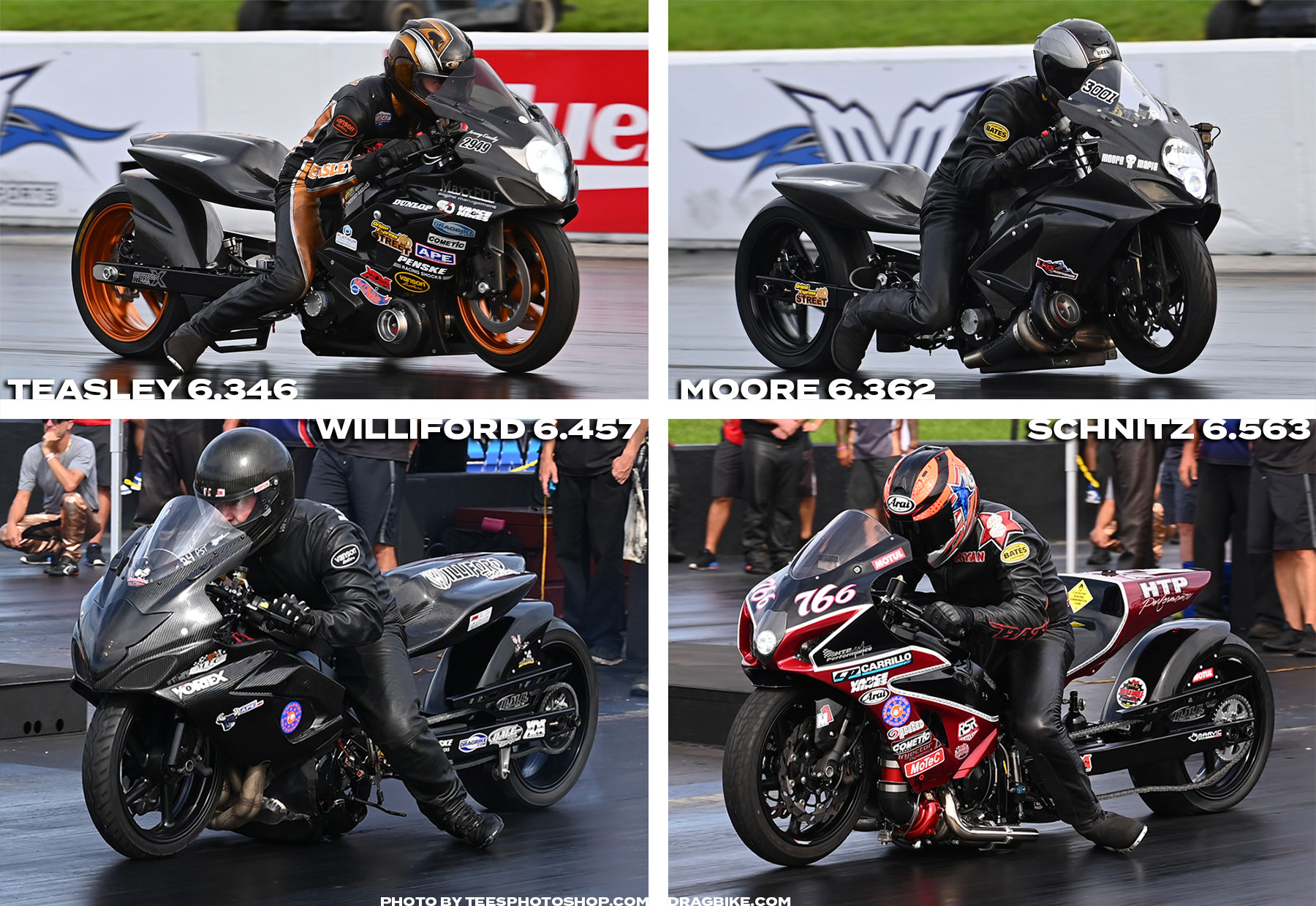 No doubt, it will be a saucy weekend at the DME Racing Fall Nationals. With only three events this year, it has shook the class. On his Suzuki Hayabusa, Greg Wallace won the season opener, and 2019 champion Jeremy Teasley took a surprising first-round loss to put his hopes at defending his championship in serious jeopardy. Chris Moore has had back-to-back runner-up finishes that have put him ahead by twenty-five points over the class. In a sixteen-bike field, that isn’t even a round worth of points. But the finale features the Battle Royale, and with that, the whole game changes. 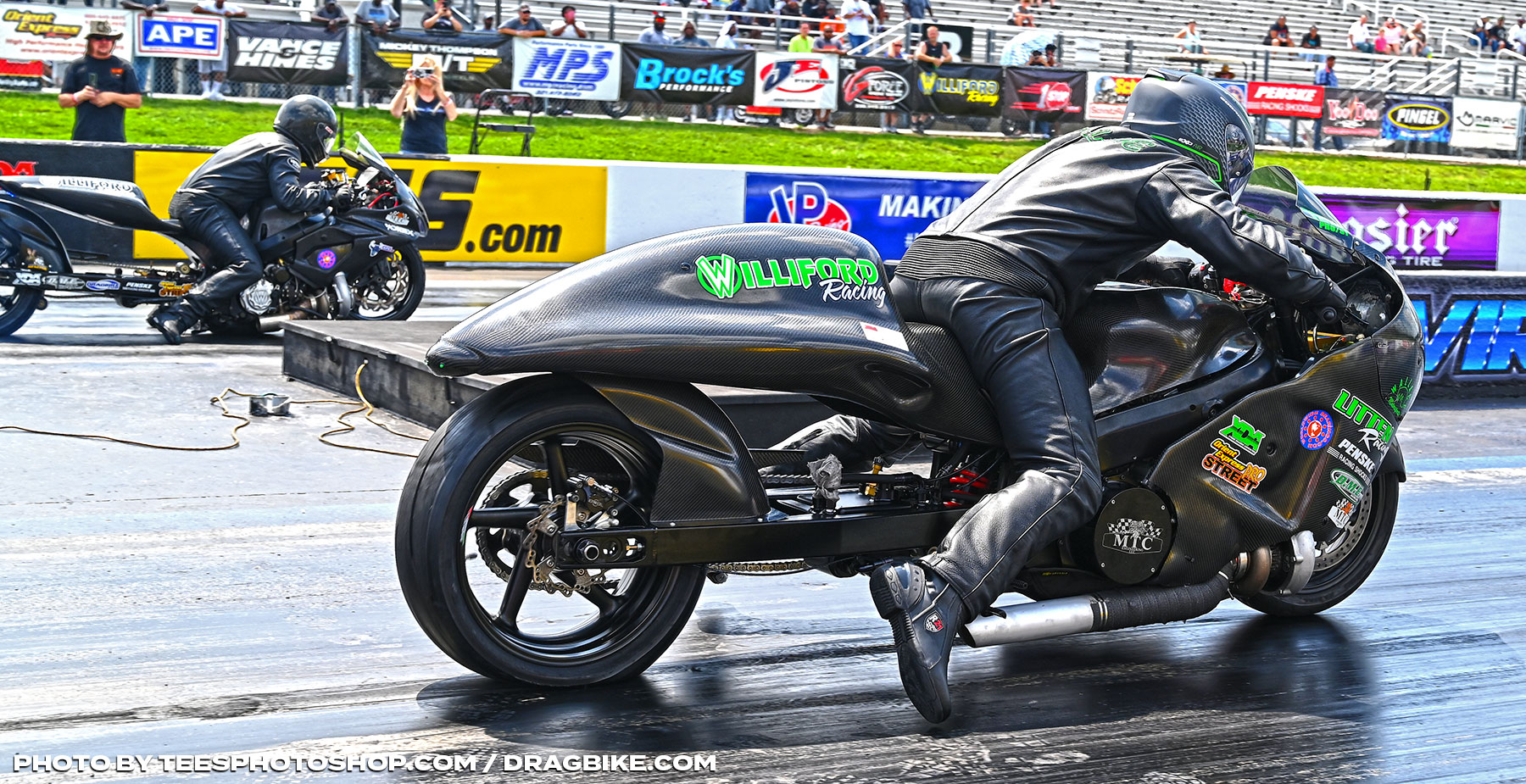 The additional round of competition will give competitors an extra round to earn points. But with that, the points system also changes and now makes this championship wide open for our top fifteen competitors. Meaning even Jordan Haase could take home the title from the fifteenth spot. And if that happens, Haase will be unbearable at the Hail Mary Derby in November at MDIR. Rodney Williford, arguably the most decorated Pro Street racer of all time, still has a shot for another world championship with the thirty-two bike field. 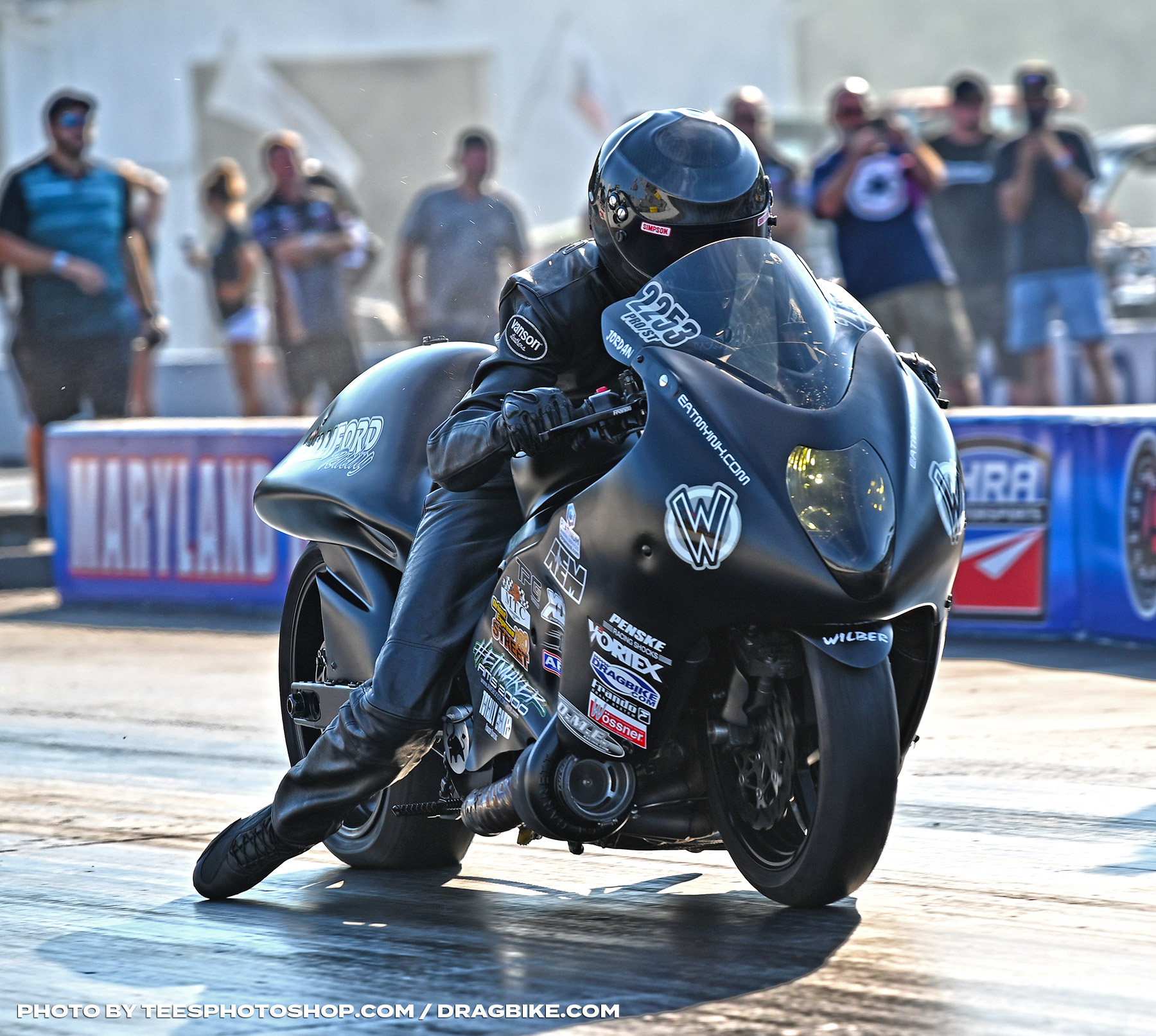 Since the inception of Pro Street, the Hayabusa has dominated this class year after year. That was until 2018 when the liter bikes start climbing the GOAT list. By the end of 2019 the DME Racing GSX-R1000 shattered the ET record to a 6.38, and now only four Hayabusa’s occupy the top ten on the GOAT list. 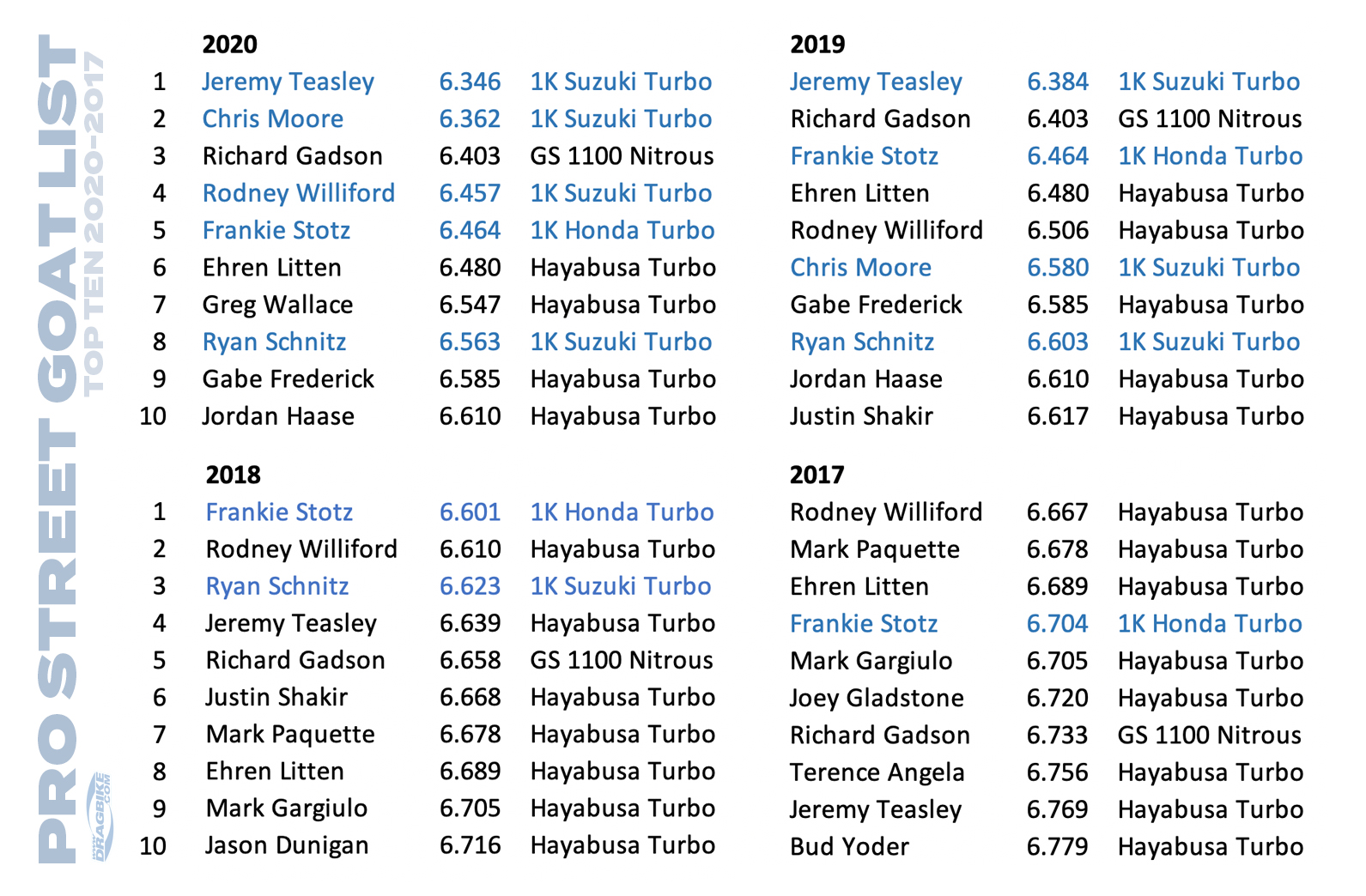 At the last event, Teasley reset his record to 6.346, while Moore set his to 6.362 to send the class into turmoil. To keep parity, XDA moved to make a rule change following the event so racers and the XDA can start collecting data on new combos to use for the 2021 season. Basically, the handcuffs are starting to come off the Hayabusa’s as they were given an extra two inches of wheelbase and can now be twenty pounds lighter, while the liter bikes lost an inch of wheelbase. Being the most lightweight rider on the lightest turbo bike in the class, Teasley will be the shortest bike of the class at seventy inches. Also, new for 2021, all turbo bikes in the class will have the same seat height and ground clearance to try and level out the playing field with the rules gap. So, the question next weekend or next year, will the liter bikes still dominate, or will balance be restored?

The action will be wide open from the first to the last pass next weekend at Maryland International Raceway. You don’t want to miss the record setting action.

The DME Racing Real Street class may see back to back Teasley championships. However, this year’s Teasley might be Brandon Teasley and not brother Jeremy. While 2018 class Champion Spencer Claycomb has the best odds to dethrone Brandon’s lead, the top six in points all have a mathematical chance at the championship. With only twenty-one points separating Claycomb from the leader, he will need to out qualify and win more rounds than Brandon to take over the points lead and win the championship. Will Brandon let that happen? 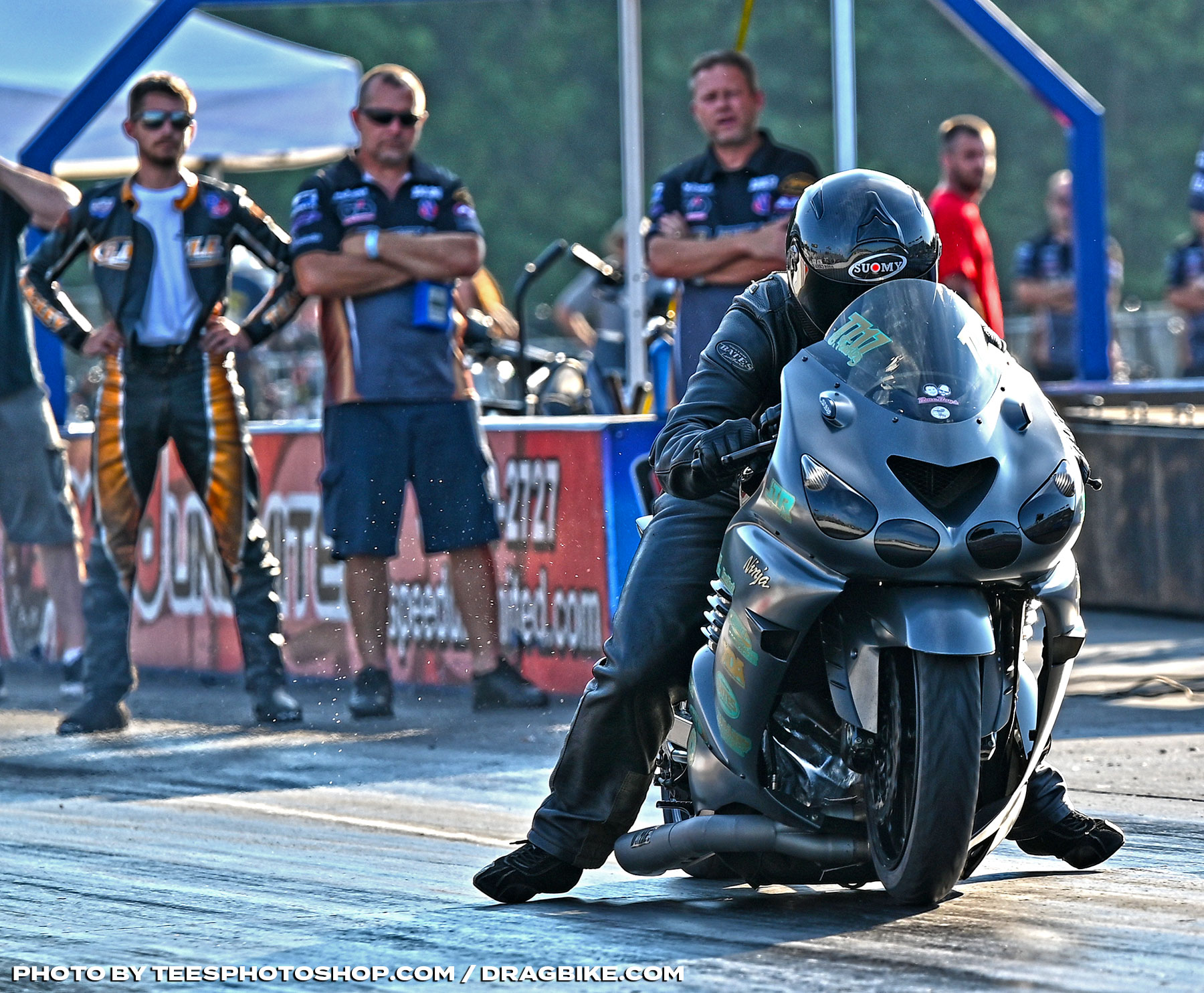 In Pro Xtreme Travis Davis has dominated by winning both events this year to gain a forty-nine-point lead on the class. His points lead is no guarantee as he will still need to win rounds and make it to the final if he wants the championship. Shane Eperjesi and Rob Garcia, who trail him in points, have been right alongside Davis in performance at the last two events and won’t be easy to shake on race day. Class Champion Kevin Clarke, who sits ninety-nine points behind, can still defend his 2019 championship with a win at the DME Racing Fall Nationals. These riders will also be striving for an ET record that yields a crucial ten bonus points to further their goal. This class is growing at each event, and with additional new bikes on the table, we could see 16+ bikes at the XDA in 2021. 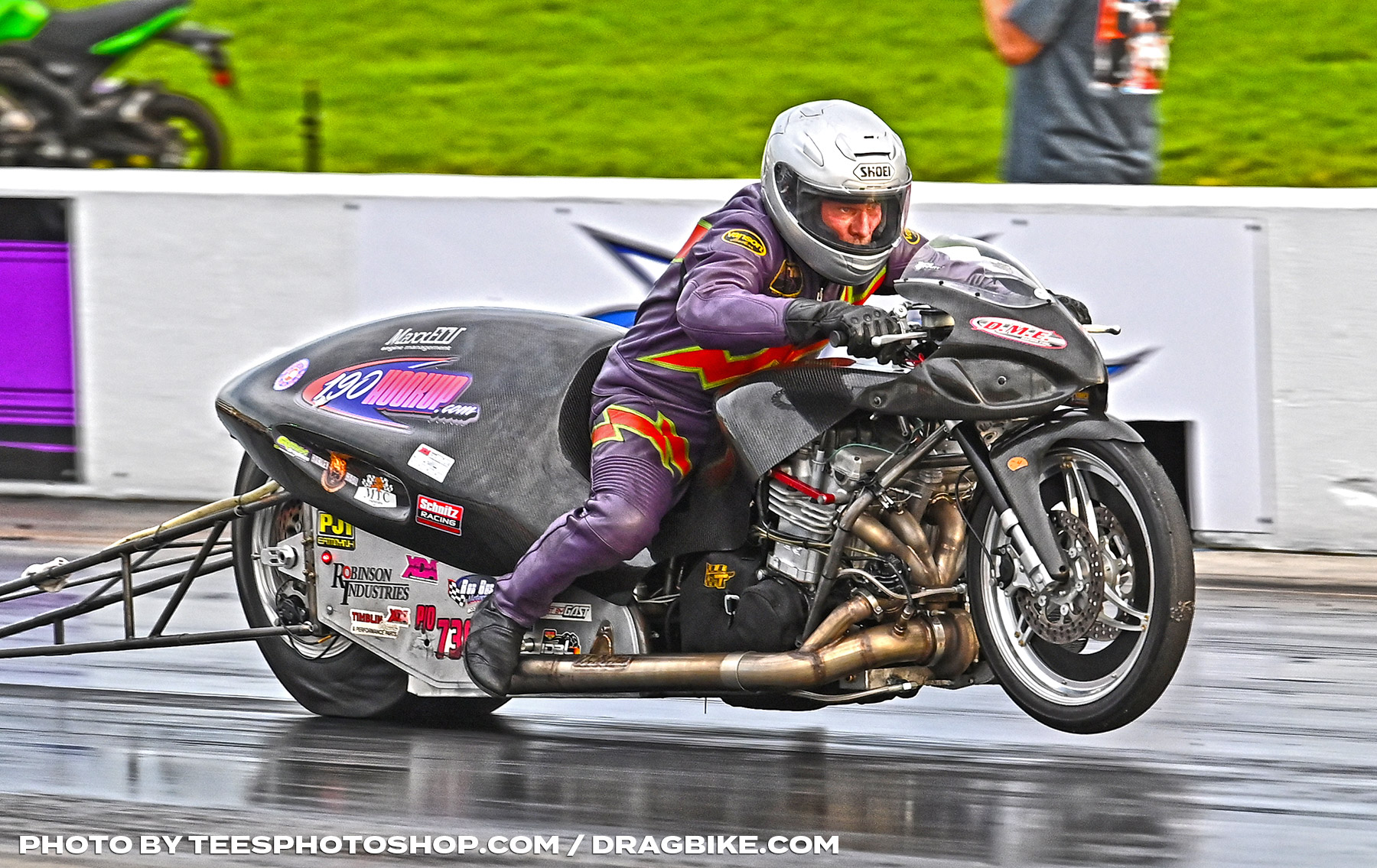 The HTP Performance Super Stock class has lived up to the hype since its debut in July. The rider from Puerto Rico has been unstoppable this year, taking back to back wins and setting records. David Fondon has practically wrapped up the championship; he just needs to show up and qualify sixteenth or better, while out-qualifying Curtis McDougald and Jeremy Teasley. Though the chances are slim, Teasley and McDougald need to stay ready to battle if Fondon’s dominance comes to an abrupt end. The chase for the championship isn’t over just yet. 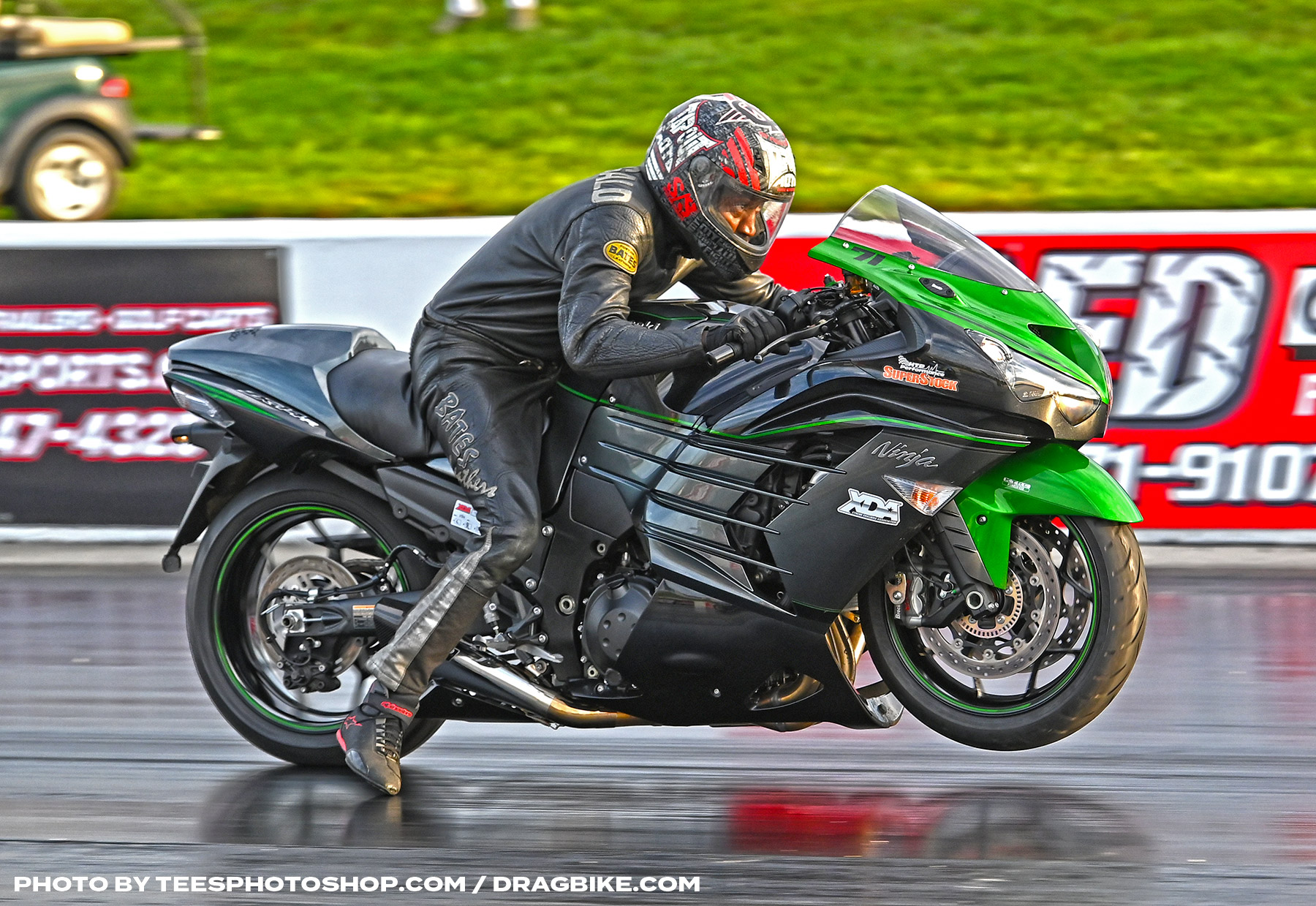 The HTP Performance Grudge classes will be hooking up at the finals with their last chance to earn points and flex their performance. Matthew Dozier and Lavar Delee both can unseat Jeremy Teasley for the championship in the APE Nitrous Bulls class. And in Monster Bulls, David Page on ‘Pickin Pockets’ may seem unbeatable with two wins under his belt this year. But Howard Green and Dave Martin can start turning on some win lights to empty those pockets and put themselves on top. 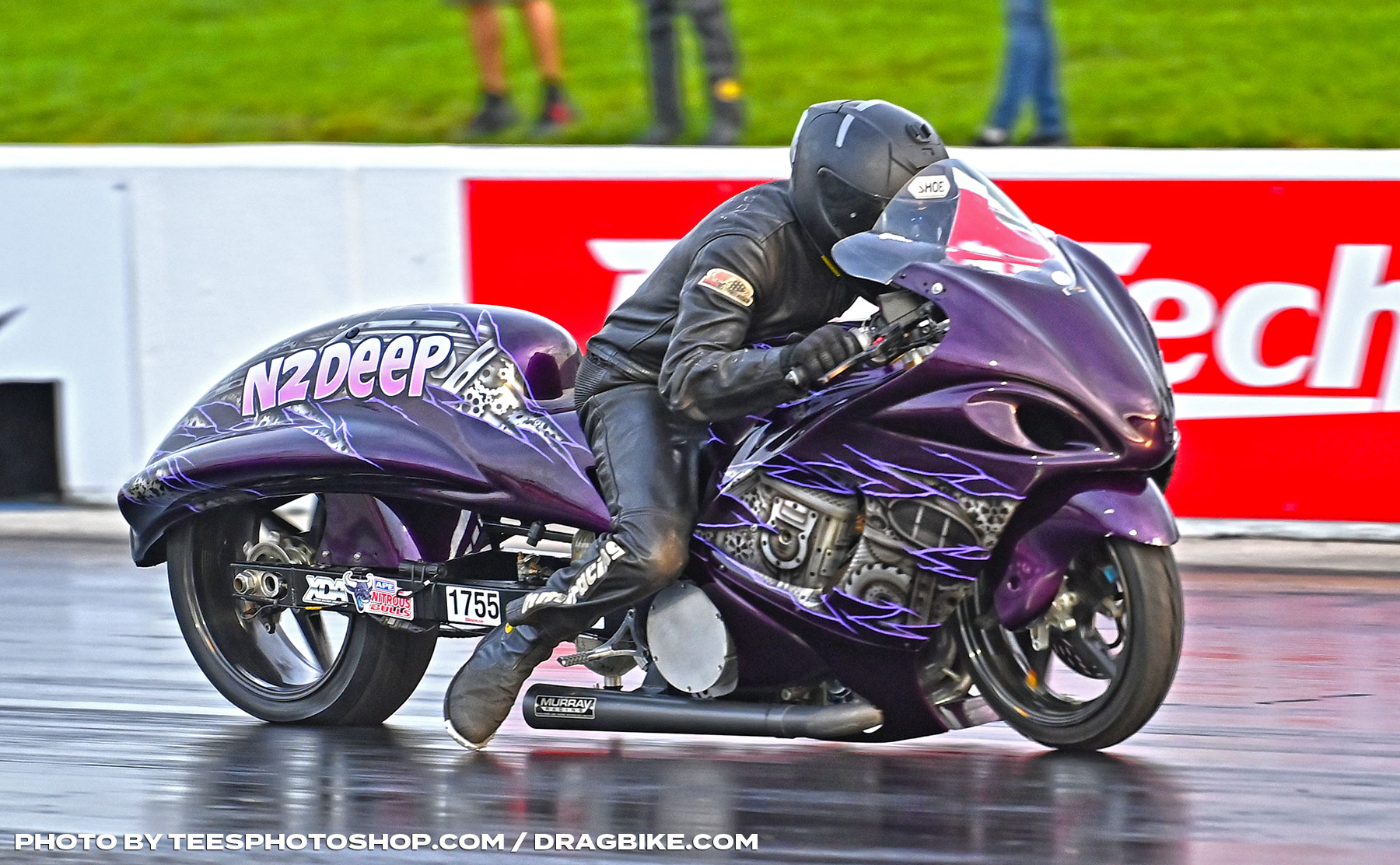 The Grudge class has the best track prep available in the country and runs with every Pro session all weekend. This is the last chance to show us what you got.

Mac McAdams, who finished second in last year’s Vance & Hines 4.60 index class, now leads the troops with fourteen points over second in command, Ronald Procopio. Boo Brown and Steven Shriver are sitting thirty-nine, and twenty-one points behind and with Procopio have the best advantage to make a move for the championship. However, mathematically, chief statistician Fabian Brown says that the top thirty-two bikes have an opportunity to overthrow McAdams. Making our quickest eight-mile sportsman class another wide-open championship for the taking. 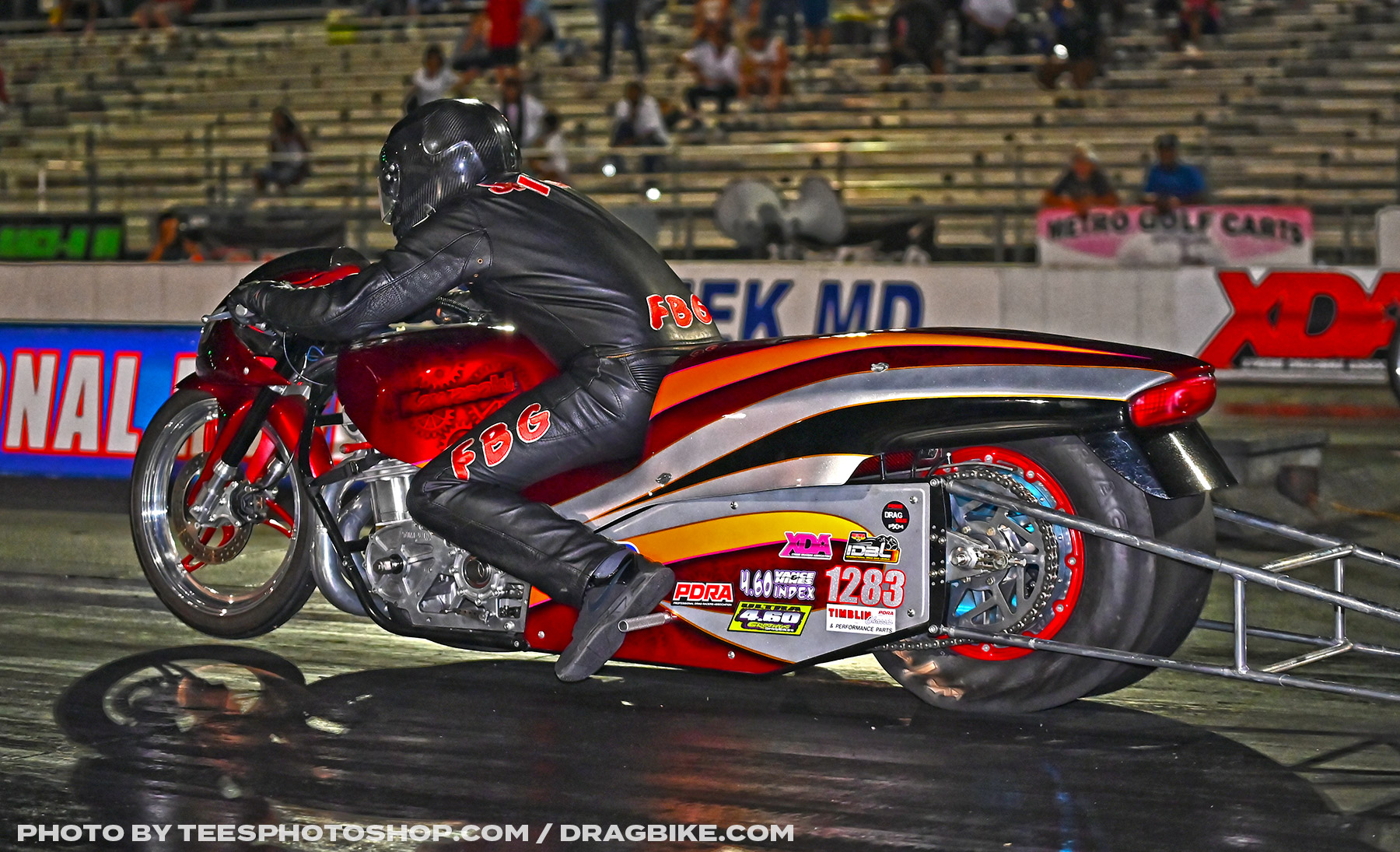 The FBR Shop 5.60 is led by Dustin Lee, who will have no easy task going into the season finale. Lee carries a ten-point lead over Shayne Proctor; this is less than one round of points. Previous event winner Jimmie Miller who is only twenty-six points behind is hungry for another final round appearance and chance at the championship. Twelve racers have a chance to win this title. Nothing is guaranteed, and every possible point is going to make a difference in this class. The qualifying will be tight on Saturday.

MTC Engineering Bike Bash winner Robert Parker leads the Crazy 8’s class by sixty points over season-opener winner Tylan Beckelheimer. Beckelheimer will have his fingers crossed that Parker takes a first-round loss to gain enough points to pass him for a chance at the championship. Stephen Knight, Andrew Ritchey, and Nick Hamlett sitting seventy-five points behind and will need to see Knight and Beckelheimer loading up after a round one loss if they want to overtake the points lead. Next weekend the top seven in points will have the opportunity to become XDA’s last and final Crazy 8’s champion, as this class will not return in 2021 due to the growth of the XDA and limited track time available.

Mickey Thompson Top Sportsman points leader, Art Lawrence, has not won a race this year; however, his consistency in round wins at the previous two events has earned him the top spot. Dustin Lee, who has never won a Top Sportsman championship, sits in the number two spot only ten points behind the leader. This year’s previous event winners Michael Parsons and Jim Shifflett are trailing with a chance at the championship along with the top seventeen competitors in points. 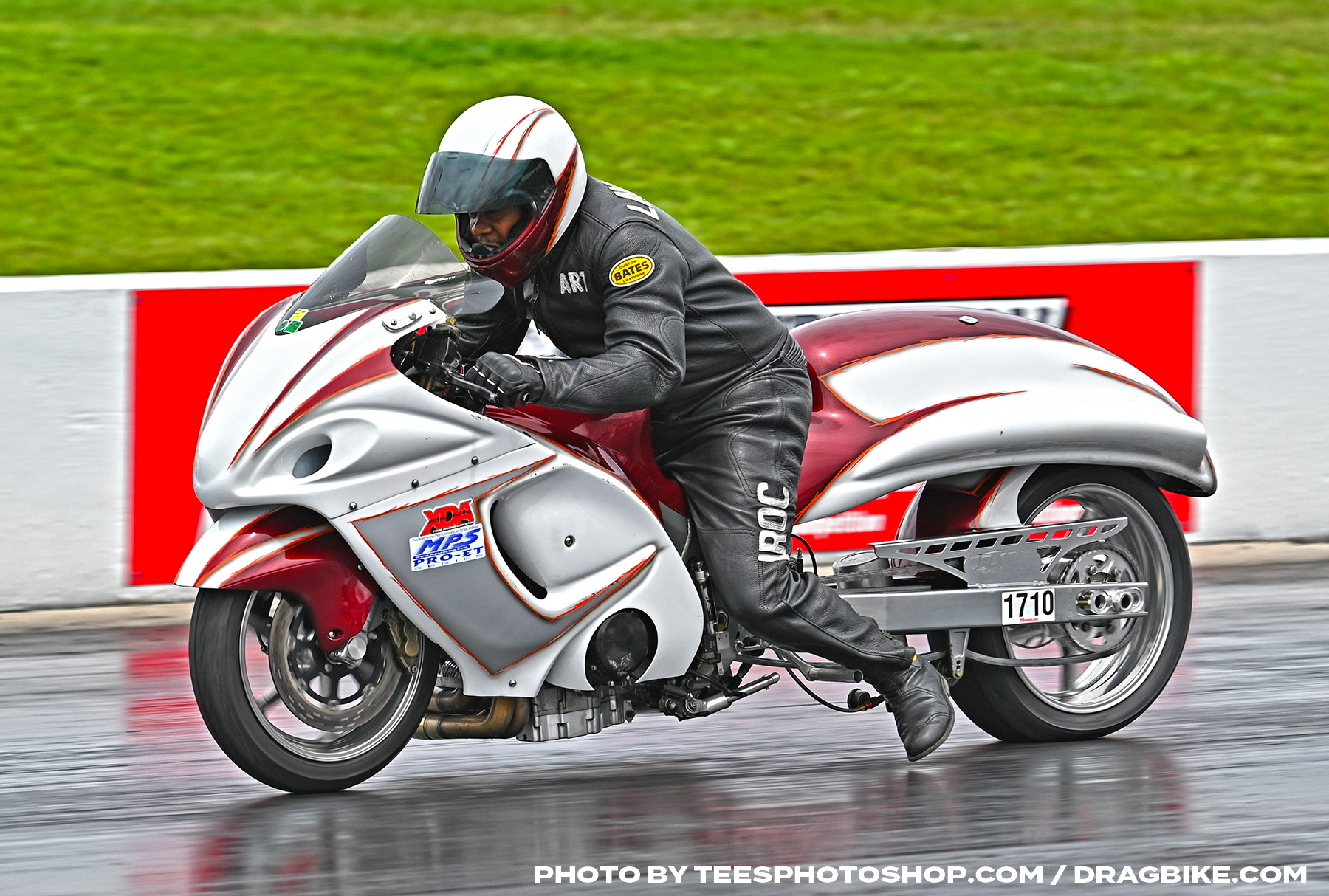 James Farmer leads the MPS Racing Pro ET points, but Stephen Knight is only a round behind him. While the top five competitors in this class have a chance at the championship, Knight and Farmer will be hard to maneuver around. These two have both seen finals at every event and will be on their game once the bulbs start dropping. There are two races in one weekend, allowing the majority of the class to shoot up the leader board to really shake up points next weekend at the DME Racing Fall Nationals. 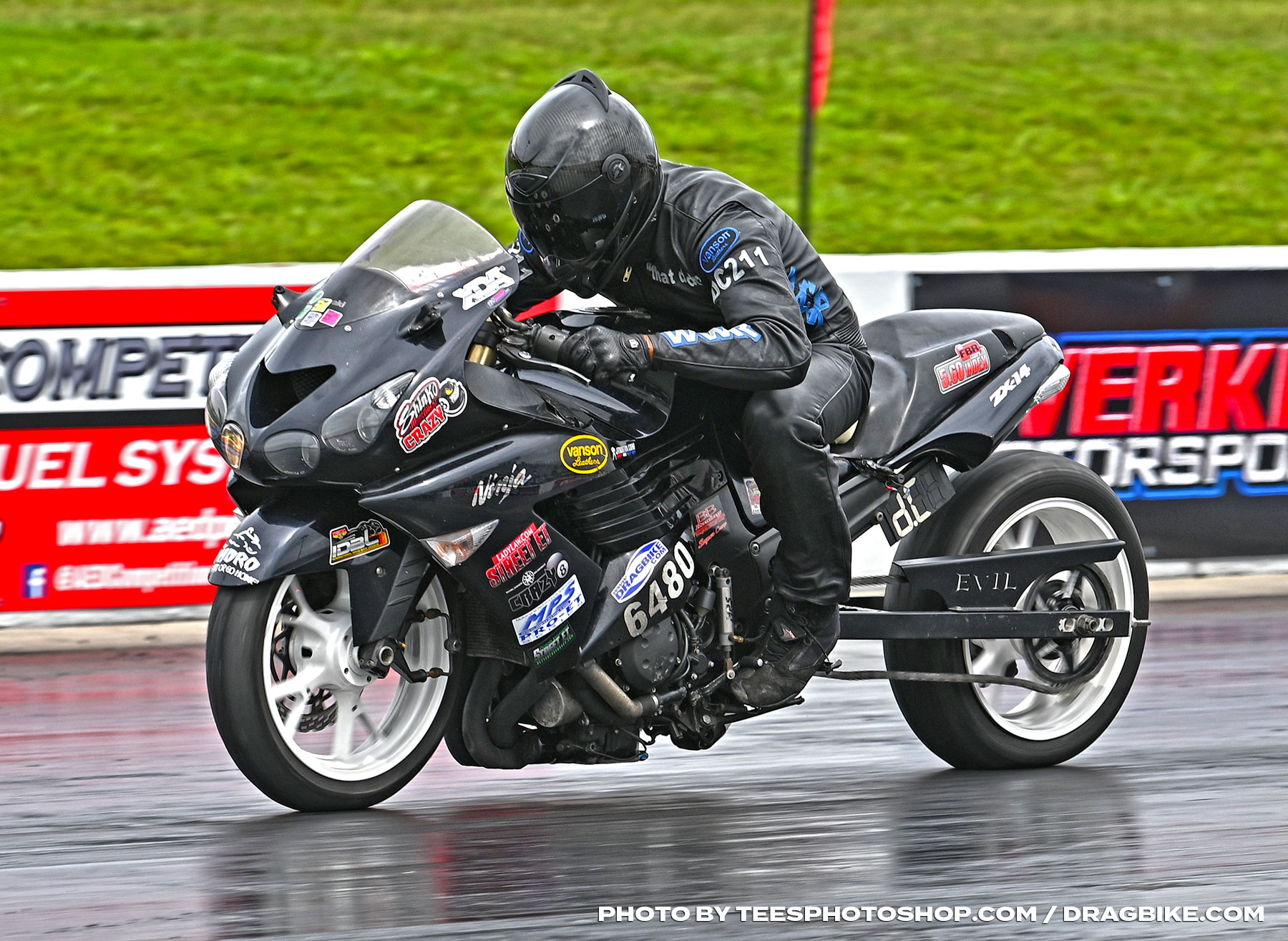 Championship contender Derek Crawford just took a win with the SBRA (Sothern Bracket Racing Association) and will be using that victory momentum to make a move on the championship next weekend.

The Brock’s Performance Street ET class covers the gamut of beginner riders all the way to the seasoned racer. And going into the final event, there are so many possible combinations that the champion cannot be predicted. Derrick Milbourne has a mere forty-one point lead in the class. In the last two years, he has finished in the top five, coming in second place last year. With two races in one weekend, and re-entry available after a first-round loss, competitors in the top of points all mathematically have a chance at the crown.

Additionally, to the drag racing action, a vendor midway will be full of great deals on motorcycle parts, accessories, and apparel – all weekend long. Nightly action will include XDA Cornhole Tournaments for a total pot of $500 per night. And XDA’s non-judged “Car-Truck-Bike Show” is good for the whole weekend and is the same cost as pit parking (except the Non-Judged Bike Show is free with admission). ANYONE and ANY vehicle can enter and bring up to 9 crew members with each vehicle.

For an exciting weekend of two-wheel racing action, head to Maryland International Raceway next weekend, because XDA is always the place to be!