With the new series traveling to multiple tracks, the Miller brothers have purchased some additional track prep tools that will deliver consistent results at all venues. “We are committed to delivering the best track prep for our XDA racers, and our team will work alongside the staff at each track on the tour to deliver those results” stated Jason Miller. “Last month Maryland fans witnessed the quickest side-by-side 6-second Pro Street pass in history, and we want to see that kind of performance at every event.” 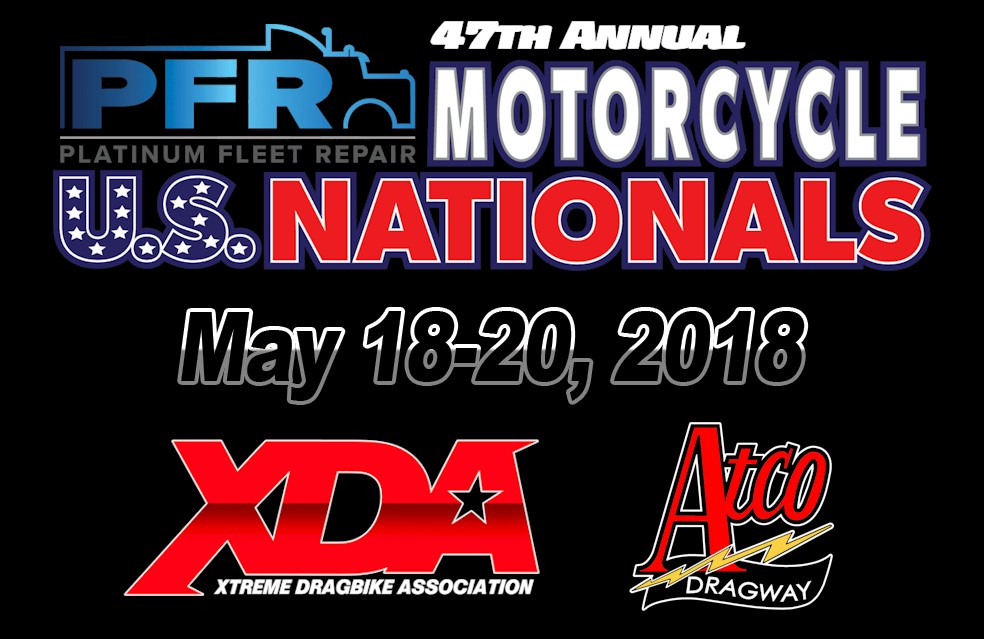 “This event is one of the oldest motorcycle drag races in the country and has a rich history. Len Capone and Caitlin Sabin (Owners of Atco Dragway) and I have a plan to grow this event in the coming years into the size of our WPGC Bike Fest event by targeting the huge Philly market and adding more lifestyle activities in the pit area over the next few years. It will take a little time, but we will get there, I guarantee it!”

Mark Gargiulo and Chris Connelly Jr. may be leading the Orient Express Pro Street points, but their tuners Ehren Litten and Andy Sawyer will have their work cut out for them at Atco.

Last week the Millers and Platinum Fleet Repair put a purse of $6,900 together and invited the top 10 in points to compete in front of 30,000 fans at the 23rd annual Haltech World Cup Finals. Now, more than ever, every point counts, not just a win. Entry, qualifying, and record points will come into play to make it to this elite bonus event that rewards series loyalty. (Click here for complete information)

Ray Lee on the Courtland Suggs bike, tuned by Brian Hayes of ESP Motorsports will be out testing this weekend to get dialed in for next weekend’s event. Based on what the team learned at the season opener, they believe we will see a dramatic improvement in ET’s at Atco Dragway.

Justin Shakir who is currently 6th in points ran his personal best ET of 6.749 at 214 mph at the last event, and he has no plans to be content. He is working on motors now and making chassis changes in preparation for next week’s big race, and he is on a mission to improve his ET.

These teams and many others will be at Atco Dragway to move even further up the GOAT list, grab those valuable XDA points, and take their shot at the guaranteed $3,000 to win purse.

Spencer Claycomb may have set DME Racing Real Street on fire at the season opener, but he is in a class full of previous champions that will not take a back seat to the class newcomer. Champions David Stewart and Anibal Merced will be at Atco ready to make a move.

First female racer of the class, Alisha Malone made her debut at the last race, and while she didn’t make it past the first round, she did learn a lot about the bike and called the event a success. And she isn’t sitting around waiting for Atco for her next go round. Alisha has been out testing and plans to improve her qualifying position at the PFR U.S. Nationals. Her momentum won’t be stopped, ‘Just Send It’ is her motto and she won’t be missing a chance to take the tree!

Mike Sweeney Jr. who only ran one event last year, showed up to the season opener and ran a personal best and Combo record of 8.076. Mike plans to run the entire XDA season and make his mark in Real Street this year. “We have a new motor this year, and the last event was our first time running it. Running on a well-prepped track makes all the difference, and we plan to run all the events and finish strong this year” said Sweeney.

We are expecting a full field of entries in DME Racing Real Street at Atco, as many teams finally have their bikes ready to do battle.

Mike Thyen may have won the first battle of Vance & Hines 4.60, but the war is far from over. A winner cannot be predicted based on qualifying in this cutthroat class. You could flip a coin every round because no one in this class gives away round wins.

Class champion and 2-time runner-up at the season opener, Boo Brown will come to Atco ready to take a win and defend his title. Heavy hitters like Ostrowski, Cammock, Procopio, and McAdams will be prepared to stand in his way, in what promises to be another exciting weekend of wheelie-bar race action.

Local New Jersey hotshot Gemini Bey took a 3rd round loss at the season opener of the FBR Shop 5.60 class and sits in the #8 spot in points right now. But he will have a considerable home track advantage next weekend with his whole crew there. Last year Bey took a big win at the ‘Outlaws at Atco’ event in the Crazy 8’s class, so he is no stranger to the winner’s circle.

Teasley who runs in multiple classes and just set the Pro Street ET record has a 22-point lead over the class, but that can change in only one race with Ted Harvey and Kevin Adams hot on his heels.

Shinko Tires Crazy 8’s will have a strong showing of New Jersey racers next weekend, including AMA Super Street Champion Nick Mazeika. Nick has run in everything from Pro Street to Grudge, and you will always find him in a bracket class. Nick is a local business owner with two skating rinks, including Hammonton Skating Center not far from the track.

Local racers joining him in the competition are also Gemini Bey, Herbert Simons, and Steve Holden. This class will see at least 50 racers next weekend, and they will have to win a lot of rounds if they want to get past points leaders Dustin Lee and Jeremy Teasley.

Mickey Thompson Tires Top Sportsman offers the potential of $9,000 of payout over two days! The bump spot in this class is typically around an 8.30, making the 32 bike field extremely competitive. At the season opener, red lights were running rampant round after round as racers were blowing away the tree trying to get the holeshot.

New Jersey native Ryan Bonitatis took the #1 qualifying position at the season opener with 7.382, and was the only New Jersey racer to make it into the top 32 in this class. However, he would fall in round 2 with a break out pass of 7.372. Next weekend we expect to see another tight field in Top Sportsman, come out and see the action unfold over 3 days of racing.

With points now a factor in MPS Racing Pro ET, every round counts, even if you lose first round and re-enter, you still accumulate points for rounds won. Brian Guarino has taken the lead after the first event, but an 11-point advantage will not keep you safe in this class. Local New Jersey racers like Nicholas Mazeika, Frank Dinapoli, Vanderbilt Boyce Jr, and Scott McGrath will have the home advantage over the 150+ racers that will enter Pro ET next weekend.

Brock’s Performance Street ET has a high turnover of racers with each event showcasing a lot of new faces from the locals of the area. And Atco is a perfect draw to the many New Jersey, New York, Philadelphia, Connecticut and Delaware racers. Every year we see a lot of new faces coming to the track for the first time on their street bikes, and the XDA events are the perfect event to make your first lap in drag racing. The event is well organized, the track is well-prepped, and the event staff is friendly and knowledgeable to make your first drag racing experience memorable.

HTP Performance Grudge will once again run on the best-prepped track any series has to offer. This cash-fueled class will feature the best the East Coast has to offer in No-Time racing. The bikes in this class are wicked fast and only for the riders that can talk smack and back it up on the track. Do you think you have what it takes to run Grudge? If so, grab a lane and let’s see what you can do, but you better have your benefactor ready with the dollars before the bulbs drop.

Stewart Northan on Bad Situation will return to Atco after a tough season opener. “The last event didn’t go as planned, we had a problem with the ECU, and the bike was pulling hard to the left” stated Northan. “I have parts coming in, and I’m replacing shift forks and putting a new slider in now, so hopefully that should get us in a better direction for next weekend.”

There will be over 700 Professional, Sportsman, and Grudge motorcycle drag racers in competition, and they will be competing for $34,000 in cash purse at this event! So, head to Atco Dragway for an exciting weekend of motorcycle action!