Another exciting weekend of Harley drag racing is in the bag after a few hot days at US 131 raceway located in Martin Michigan. The AMRA ProMod and ProGas classes put on a great show with some serious side by side action.

The ProMod class raced for its biggest payout in history, thanks to several sponsors and the hard work of Iron Eagle’s Larry Pratt. ProGas also has recently picked some big name sponsors that made their debuted at US 131 Raceway, which is creating some serious attention for the class.

We all know that the AMRA ProMod class has been working hard to promote their class but seriously…$2500.00 to win and a total purse of nearly $5000.00 is just crazy. With the release of their 2015 calendar the opportunity for race event sponsors came to light. Before the season began we attempted to find a ProMod sponsor for each of the AMRA races and decided to include them throughout calendar.

We all knew that Iron Eagle Motorcycles wanted to be the main sponsor for this event because they are located in Grand Rapids Michigan, making this their home town track. I had no idea that team owner of Iron Eagle, Larry Pratt would bring nearly a dozen sponsors to the table making this the biggest payout in the history of the ProMod class. 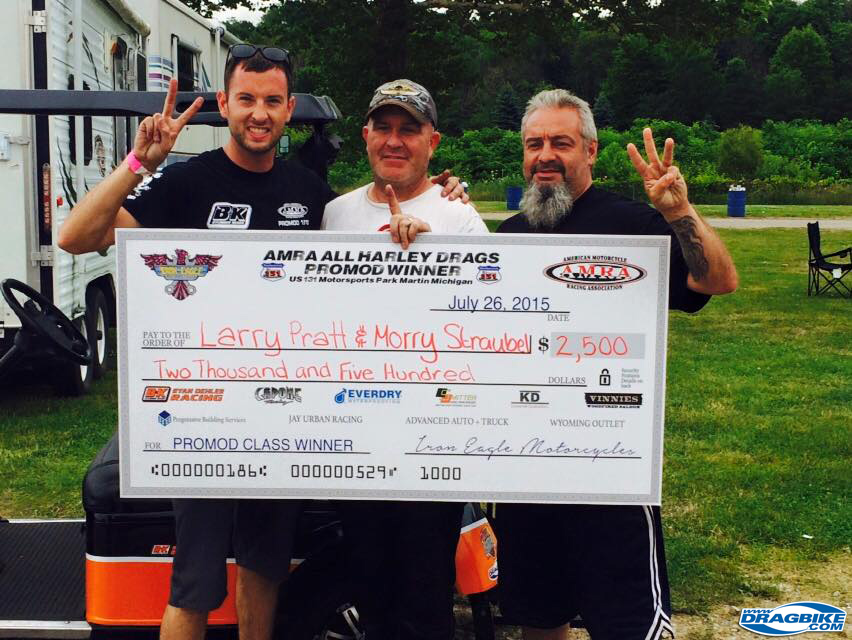 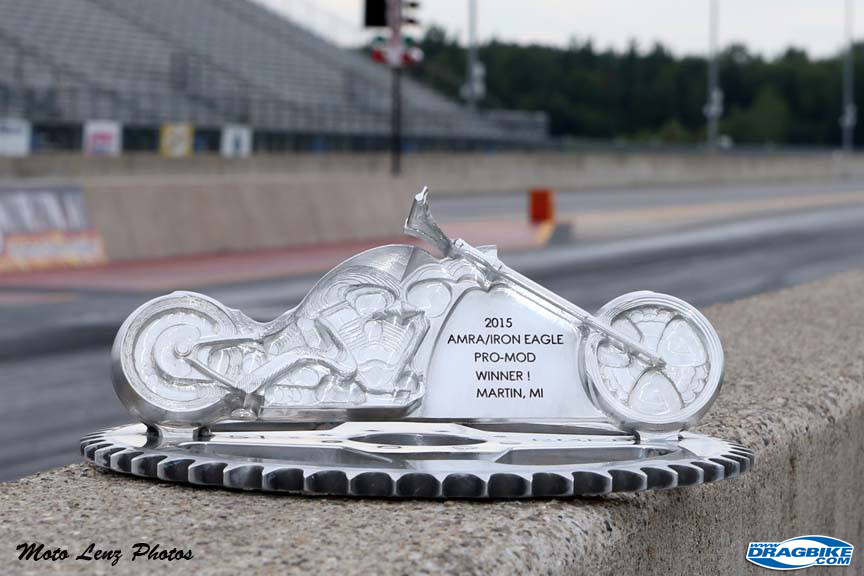 The big payout brought some serious competition. Larry Pratt and Morry Straubel came into this race ready and hungry for a win. Ryan Oehler and Morry Straubel had met in the finals at the last two races and Morry was sent home both times as runner up. Once again these two met in the finals, and with the home town crowd of Iron Eagle watching, Morry and Ryan lined up. Ryan had the advantage off the line with an .027 reaction time, Morry right on top of him with an .035 light.

As these two bikes blazed down the track Morry really showed his abilities to ride as he nearly lost control when hitting second gear, but made a great recovery and ran Ryan down just passing him before the finish line. It was a great drag race! This entire class of ProMod worked there butt off this weekend. Shane Pendergrast really lived up to his team name “Double Trouble Racing,” as he pulled double duty running in both ProMod and ProGas and was able to make it into the semifinals in both classes. 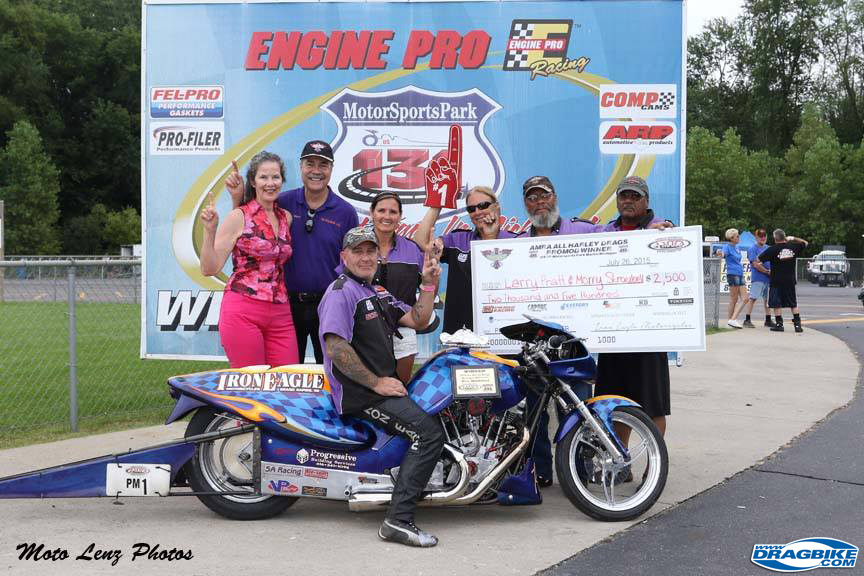 Larry Pesce was also a semifinalist but blazed the tire giving Ryan the win. Jerry Lee Cloyd ran one of his quickest passes to date showing that his machine has a very good chance of sending everyone home at the next race. Gary Douglass laid down some very good runs but is still shaking down this new ProMod beast. Henry Stanton had trouble during qualifying and damaged his motor and was unable to make it to the show on Sunday. 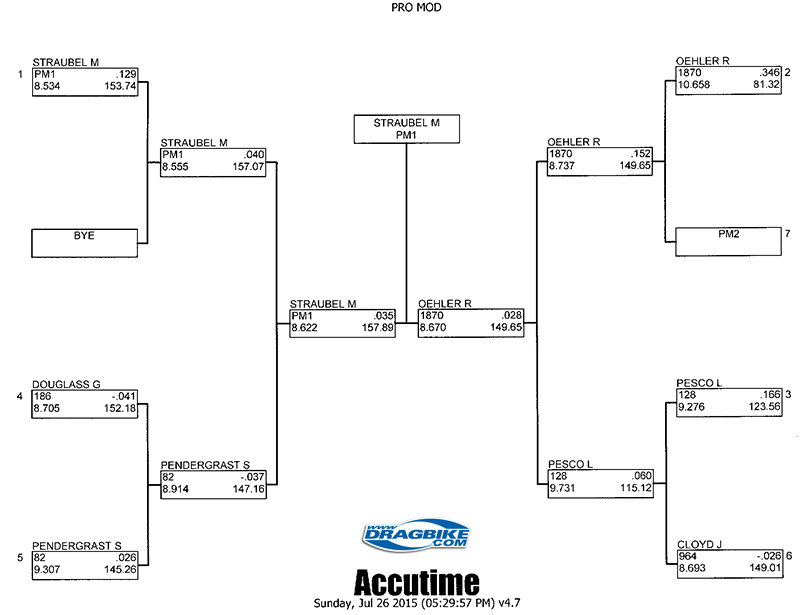 The ProGas class pulled some big name sponsors that have come on board for the rest of season. These sponsors include: Vanson Leathers, Star Racing, Redline Oils, Junior Pippin Trucking, Caldwell’s Performance Center, and Ryan Oehler Racing. Mike Pearce and his crew chief Tom Caldwell have been dominating this class and took home their 4th win of the season.

Kyle Leblanc was close runner up, but didn’t have enough to stop Mike Pearce in the finals. Shane Pendergrast met Mike Pearce in the semifinals and went for the throat with a serious holeshot, but it wasn’t enough to take down Mike Peace. Keith Richner had some problems in round one and turned on the red bulb against Shane.

Keith has been working really hard in this ProGas class and had to work overtime to make repairs to his bike after having mechanical problems at the last race. Billy Doherty had problems all weekend long, not only did he have problems in round one against Kyle Leblanc, but he had problems on the road.

Billy was left on the side of the road with problems with the race trailer on his long journey from Louisiana to Michigan and as luck would have it he also found himself on the side of the road on the way home when his tow vehicle suffered some engine problems. Nothing will stop this guy from battling his way back to the top and we stay tuned to see how he performs the next event in Bowling Green, KY on September 26-27. 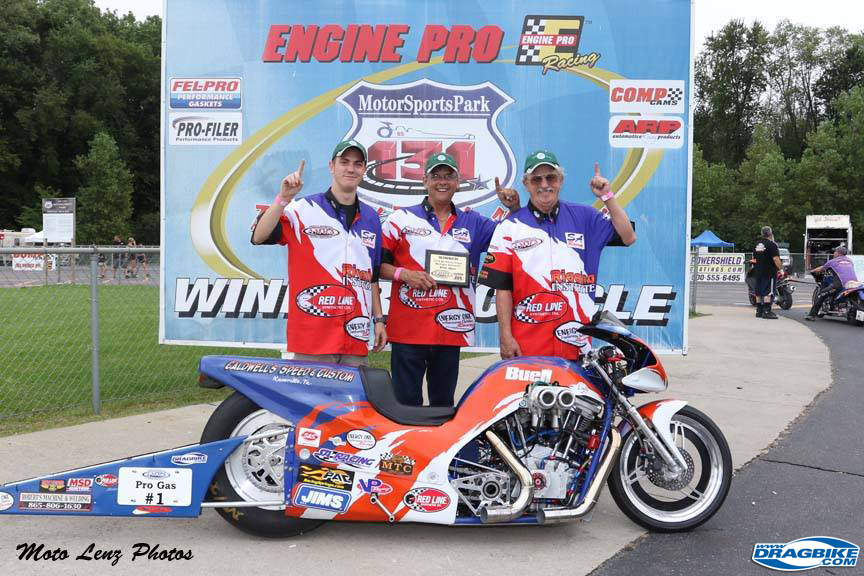 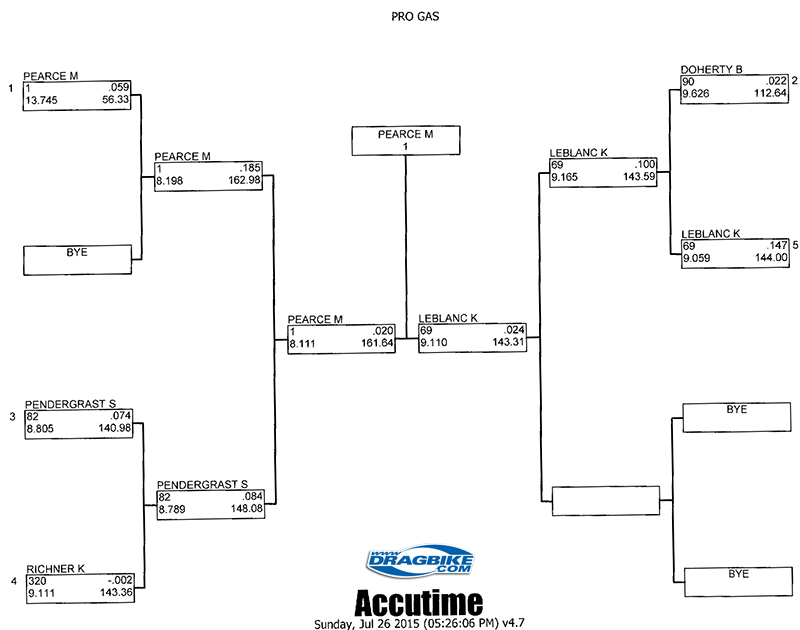