David Yanko, 2015 Summit Racing Equipment Sportsman Series runner up in Super Sedan, will lose two wheels at the next National Championship event in his hometown Portland on January 16-17.

A self confessed “bike guy all my life”, Yanko was forced to find a new ride for a local upcoming meet at South Coast Raceway when an errant piston punched a hole through the engine of his Holden HQ Ute.

With encouragement from 2013 Modified Bike Champion and good friend Gavin Dohnt, Yanko went into his shed and pulled out a Ducati that his son had been racing in the Australian BEARS Series and entered Portland’s Golden Bars event.

“We made the final and came runner up with a red light at that meet,” said Yanko.

“So without a car for the next Summit Racing Equipment Sportsman Series round it was a no brainer to enter the bike.” 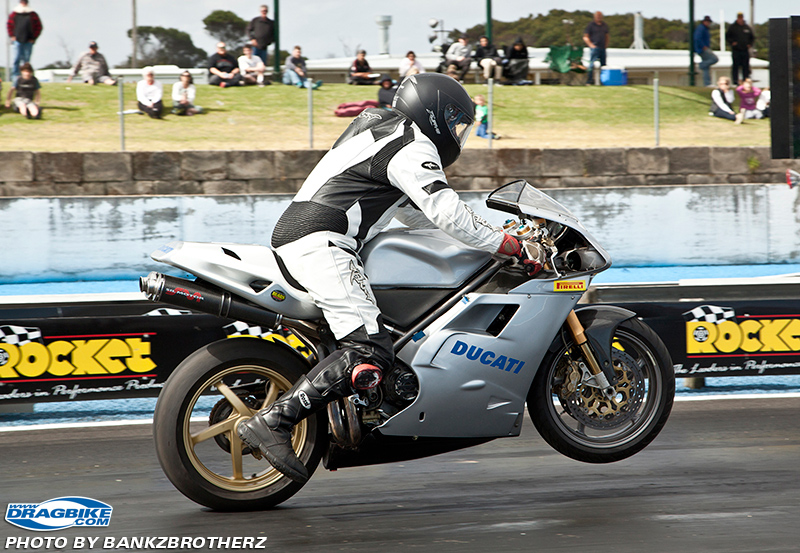 Yanko has a long history of racing bikes either on circuits or the drag strip but until recently his racing career on two wheels had been put on hold.

“I road raced a lot in the 80s-90s and entered my first bike drag race at Warrnambool in 1994 which we won.

“The next meet was in Casterton were I picked the front wheel up and when it came down it was in the gravel on the edge of the track, that sent me cart wheeling over the handlebars breaking my collarbone. I thought better of it after that.

“In the years to come I raced in the British European American series (BEARS) on a modified F1 Ducati, we also raced this bike in the Castrol 6 hour at Eastern Creek and were the highest placed BEARS bike until an untimely excursion into the terra firma put us out of the running.

“I still ride road bikes and in fact have two I keep in New Zealand at a mates place that my wife and I try to get back and ride around at least once a year.”

Coming into Round 7 of the Summit Racing Equipment Sportsman Series, Yanko is virtually out of the running in Super Sedan though he holds hopes of putting the engine back together in time for the Australian Nationals January 23-24.

At the very least this season, Yanko has been able to take the pressure off and have a bit of fun. He plans to continue racing both Modified Bike and Super Sedan but will need to practice his pit stops from race suit to leathers and back again.

“One of the biggest hurdles is going between using a delay box and then having to leave on a conventional tree with the bike.

“I don’t know the ruling on wearing race leathers in a Super Sedan, be a bit of a laugh watching from the outside. We will probably give it a go and see what happens (laughs).

“Having Calder straight after Portland is awesome, I can only hope it happens again next season. I went to the 1995 Nationals as a spectator so it’s great to see it back here again.

“The likes of the Braggs’ and all the other Victorians chasing the series have got to be loving it. In the past we have travelled to Perth, Alice Springs and Brisbane for Series points, so to have it on our door step is exceptional.”

The action will commence at South Coast Raceway with qualifying from 11am Saturday January 16 and eliminations from 10am Sunday January 17. Gates open at 9am. For more information please visit: www.southcoastraceway.com

The Australian Nationals return to Calder Park Raceway January 23-24 with qualifying from 9am-9pm on Saturday January 23 and eliminations from 9am Sunday January 24. For more information please visit: www.calderparkdragracing.com.au