Much travelled Tasmanian and part time Victorian Modified Bike racer Shane Walker will be hoping to repeat his winning form from Portland this weekend at the Summit Racing Equipment Sportsman Series presented by Mildura Rural City Council on Friday and Saturday.

Making the decision not to travel to Warwick Dragway last weekend due to commitments in Tasmania, Walker has seen his lead over Bryan Finn and Wally Hosta reduced to just 50 points, with Don Baird a mere 20 points back.

“With so many good riders chasing the championship I fully expect three to five of us to take the 300 point cap to Adelaide,” said Walker.

“The last three seasons have seen it go down to the wire with at least three riders in with a shot come the final round.” 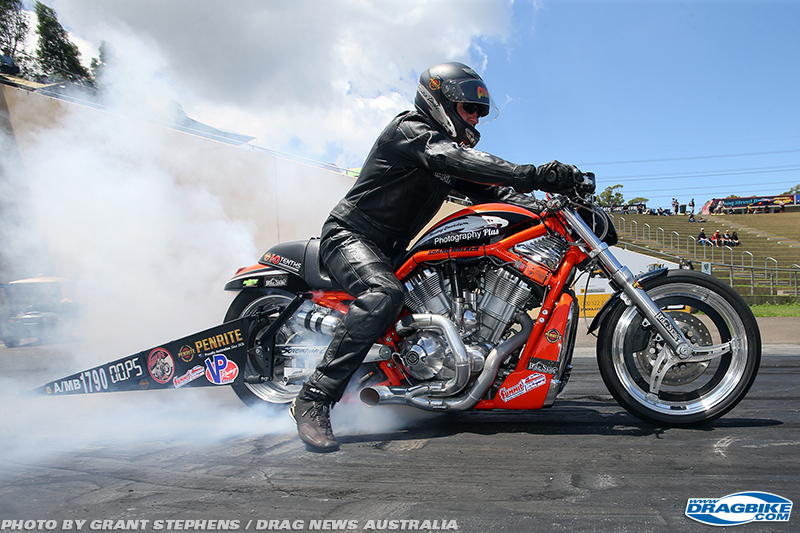 Conditions will be very hot in Mildura but Walker insists he is not feeling the pressure despite the Harley Destroyer slowing in the heat. He carries his most recent win in Portland three weeks ago into the Sunset Strip where he previously won this event in 2014 for his first ANDRA Christmas Tree Trophy.

“I’m not (feeling the pressure) if the other contenders go out in the first round and I win it,” he laughs. “I beat Wally in Portland but the guys are good riders.

“The heat usually slows the Destroyer down but everyone else is in the same boat. I love the night-time sessions as I usually prefer to race at night so hopefully that will give me an advantage.

“Seriously though any one of us can get to the 300 points cap with a couple of good meetings – there is a lot of racing left this season. It’s a fantastic series to be a part of!

Shane would like to thank Penrite Oils, Bikeskate, Mid Life Cycles, Photography Plus and Ballistic Performance Parts for their ongoing support.

Qualifying begins from 5:30pm on Friday December 4 and continues through Saturday December 5 from 11am. Eliminations commence from 5pm Saturday with special guest cover band KEG entertaining racegoers following the completion of racing on Saturday night.