Parkhurst Modified Bike racer Ace Edwards hasn’t twisted the throttle a great deal of late. But when your last two events include a Winternationals win and a runner up several months later in Sydney at the East Coast Nationals, you still come to Warwick Dragway this weekend as one of the favourites.

For the first time ever, the Summit Racing Equipment Sportsman Series visits Warwick Dragway this weekend (November 28-29). Edwards will also get his very first look at the drag strip competing in Modified Bike, a traditionally tough bracket with healthy competitor numbers.

“I have never been to Warwick but I’m looking forward to racing there on the weekend,” said Edwards.

“I’m expecting the heat to slow the bike down a little but I will be happy to see consistency, as that is what it’s all about. 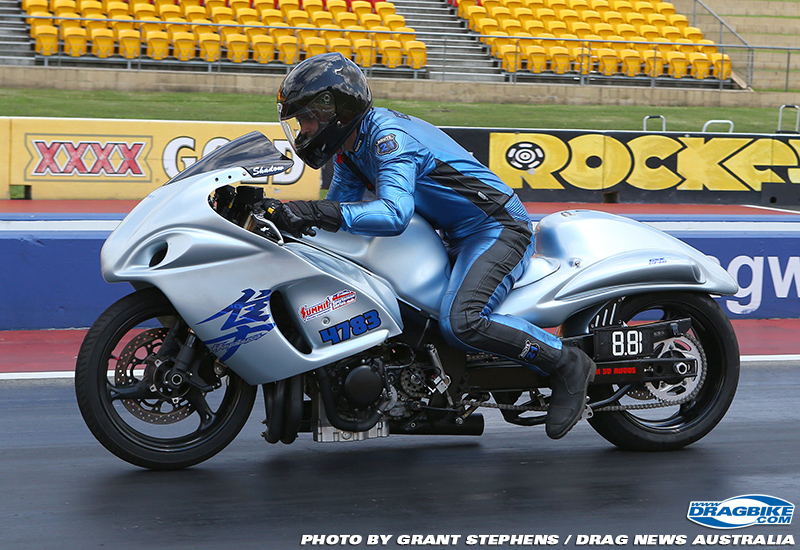 “Since the Winters I have only raced the bike once at Sydney and also made it to an event at Palmyra but it rained out before racing began.

“The bike feels as though it’s on rails and as long as I can do my job with reaction times the bike will do it’s thing and hopefully that will land me in the winners circle.

“Of course I would love to finish off the year with a win and a Silver tree to add to the cabinet but if that is to happen I’m going to have to overcome some great racers on the weekend.”

Edwards began his career in Junior Dragster when he was 13. When he turned 17 he went straight to two wheels with a lowered Hayabusa street bike for three to four years before adding an extended swing arm and racing the bike for another 12 months.

“After selling that bike, I bought another one a year later and set it up very similar but this time I added a full slider clutch,” he says.

“It is the best thing I ever bought when it comes to bracket racing, the only downfall is that I have to get towed to the lanes and down the return road.”

Luckily his dad is always close by, sometimes in the other lane, and he credits his parents for their help in reaching his current heights.

“Racing with my dad is awesome and we both get a real kick out of lining each other up. I wouldn’t be where I am today without him and my mum who have always supported me whether it be with racing or generally in life.

Edwards will be one to watch in Warwick following adjustments to the gearing and clutch set up of his bike to improve his start line reaction times.

The Summit Racing Equipment Sportsman Series at Warwick Dragway this weekend November 28-29 commences from 10am both Saturday and Sunday.