Top Fuel Motorcycle performance was no less impressive in the second round of their ANDRA championship, with Western Australian Mark Drew resetting both the time and speed national records for twin cylinder machines on his way to a win.

The final was an anti-climax when opponent Chris Porter had a fuel issue on start up, meaning he had to shut down his bike and watch as Drew took a solo pass for the win. 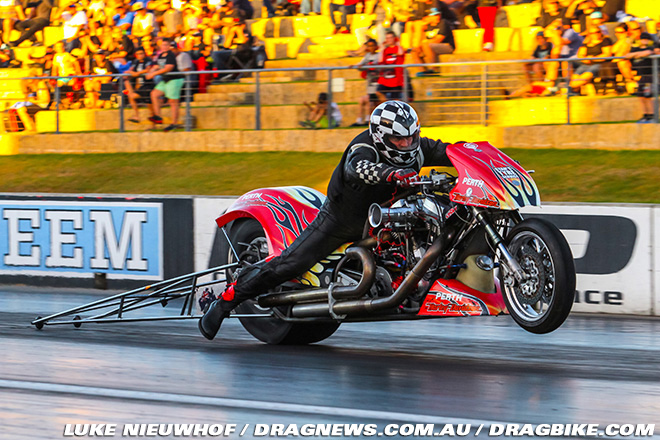 Drew’s elimination round pass of 6.341, backed up by his top qualifying pass of 6.350, was enough to wrap up the elapsed time end of the national record, while his 371.36kmh speed also had the record books burning up.

“I left the same tune up in it that I ran last meeting for the final, only I put a little bit more on the clutch for the top end for our second pass where we went a little bit quicker,” Drew said.

With improved national records, Drew said he is targeting a world mark soon.

“We will get it into the high 6.20s pretty easily I reckon,” he said. “Then we are only a tenth off the world record.

“I need this year to get it into the 20s, then do a bit mor
e homework and talk to a few contacts overseas and show them what I’ve got and get their opinion on where to tidy it up.

“I think we have track here as good as anywhere in the world so it is not out of the question.”