ANDRA : Modified Bike Champ coming back for one last ride

Modified Bike Champ coming back for one last ride

2015 Modified Bike Champion Ian Read (Success, WA) will make a one event return to sport the number #1 on his bike for the first and last time at the ANDRA Championship Grand Final April 9-10 at Adelaide International Raceway.

The event will serve as the 10th and final round of the Summit Racing Equipment Sportsman Series for 2015/2016 where the West Aussie will make his bow as outgoing Champion.

He will be accompanied by his son Brodie and is keen to make up for lost time after he could not attend events at Portland and Calder Park in January.

“I look forward to catching up with my fellow bike racers and I am calling on them all to enter giving them the opportunity to get a win against me with a number #1 on the time slip,” he jokes.

“I’m excited to finally get away from work and bring Brodie to his first interstate drag racing experience where spectators are able to get closer to the action (at AIR) than any other track in Australia. 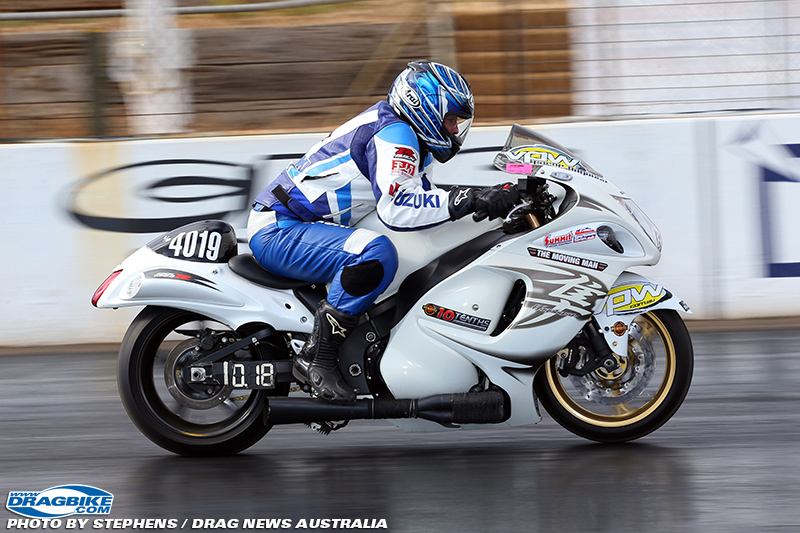 “With the Rapisarda Top Fuel team attending I am sure Brodie along with all the other race fans will be in for a treat. Add to that Chris Matheson on his Top Fuel Motorcycle and John Zappia’s Top Doorslammer there will be no shortage of quality race competitors complimenting the Sportsman racers in what should see healthy fields over two great days of racing.

“I really look forward to enjoying the atmosphere that AIR brings and the Adelaide crowd who have welcomed many West Australians on my previous two visits. The interstate banter between competitors is always a highlight too.”

Read hopes this visit will be third time lucky for him as he searches for a first ever event win at AIR. He last experienced shifter issues when a bolt came loose preventing him form entering second gear

“Having not been on a bike since November it will be a big challenge against some seasoned racers,” he adds.

“This will also be an emotional meeting for me with this Suzuki Hayabusa 1340cc Championship winning bike now being sold and allowed one last event.

“Thank you to the new lucky owner who has been kind enough to accommodate.”