From stunt riding to propelling himself on a two-wheeled rocket on the quarter mile, Ben Stevens’ road to Top Fuel Motorcycle is hardly a straight one.

The son of former Top Doorslammer driver Gary Stevens and nephew of Top Fuel Motorcycle racer Kim Stevens, Ben came to his Nitro Harley epiphany in a hospital bed following the amputation of his right leg below the knee.

“I was having a joke with a mate about fuel bikes whilst laying in a hospital just after I had lost my leg,” he explains.

“And as my days as a stunt rider were now over, the next craziest thing that stuck in my mind was Top Fuel Motorcycle so I thought I may as well turn this joke into a reality.

“I had always wanted to give one a shot, from watching my uncle and Brett Stevens (no relation) ride them like animals for many years, it’s something that was concreted on the to-do list!

“I was lucky enough to have a few runs in my father’s Doorlammer back in 2008, which was awesome, but it’s a totally different ball game when you’re laying on a fuel bike.” 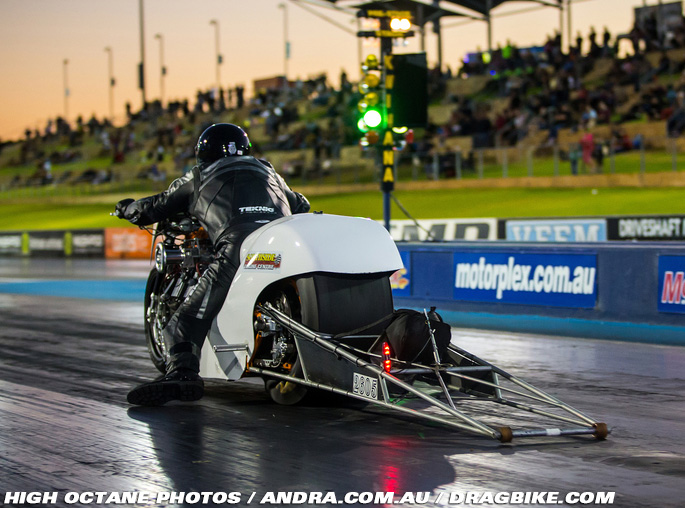 Riding his uncle’s Harley, Stevens made an impressive debut in the opening Top Fuel Motorcycle round of the ANDRA Drag Racing Series in Perth last month reaching the semi finals.

That came albeit with the help of a bye run in the first round but he qualified sixth and gave three-time champ Chris Matheson a run by getting the reaction time advantage before lifting off the throttle in his losing semi final.

“Our first event was great,” said Stevens. “After a small issue and missing the first qualifier we came out in the second round and run a mid-7 which put us number six out of the eight bike field.

“Race day first round we had a solo, which really was a blessing in disguise as my steering had come loose. I rolled out and gave it my best shot but it wasn’t enough to hold the bike straight.

“Second round we had come up against Matheson, and the bike was fairly angry. I had a few fishtails off the line and crossed the centreline at around 1000ft. This would have been one of the more exciting runs to say the least. We finished up fourth for the meeting; the crew and myself were pretty excited!”

Following that strong start, attention now turns to the second and third round of the Championship over two nights at Washpod Nitro Max where Stevens is just hoping to continue progressing and improving.

“We know the bike has a lot more in it, Uncle Kim had run 6.50 on it a few years back and also 218 mph, so the biggest thing for myself and our team is to get a handle on different tunes and setups and get them down the track.

“This could take years for us to achieve.  We are a fresh new race team, with four out of the five crew having no involvement with the drags beforehand.

“I think we’re going pretty good so far. They have adapted well.”