Angelle Sampey outdrove the entire NHRA Pro Stock Motorcycle class on her way to the winner circle at the 47th annual NHRA Summernationals. In her 70th final round of her career, Sampey wanted to hoist the Wally at the end of the day for her Star Racing/Precision Service Equipment team but most importantly, her daughter Ava. 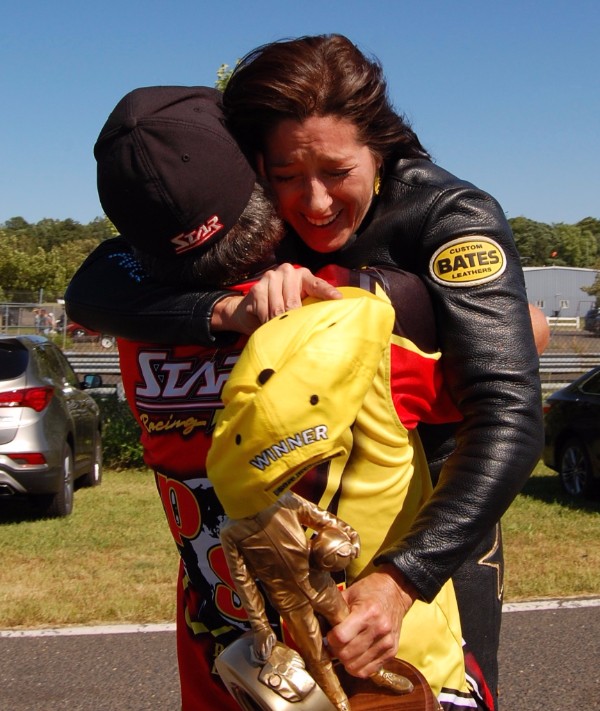 Sampey qualified No. 5 and had a first round matchup against Michael Ray. With lane choice, Sampey crossed the finish line with a 6.836-seconds at 196.62 mph against Ray’s 7.070, 162.08. Her 6.836-second pass was the quickest elapsed time for the first round in the highly competitive motorcycle class.

In the semifinals, she had a matchup with Hines’ teammate Eddie Krawiec. It was outrunning Krawiec’s 6.970, 196.24 with a 6.852, 193.74 that sent Sampey straight to the final around with lane choice and a matchup against fellow Louisiana-based rider, Jerry Savoie.

This final round was extremely important to the Star Racing team and especially Angelle. She hadn’t been to a final round since Norwalk last year. She hadn’t won a national event since 2007 in Houston, Texas and after nine years, she was ready to turn on the fourth win light of the day and the 42nd Wally of her illustrious career.

Sampey and Savoie staged their bikes and it was time to lay it all on the line. Sampey left nothing to chance with another remarkable .002-second reaction time and with massive crosswinds, Sampey had to adjust herself on her bike the entire way down the track to compensate. Tears filled Sampey’s eyes when her win light came on when she ran a 6.876, 194.41 against Savoie’s 6.928, 177.21. 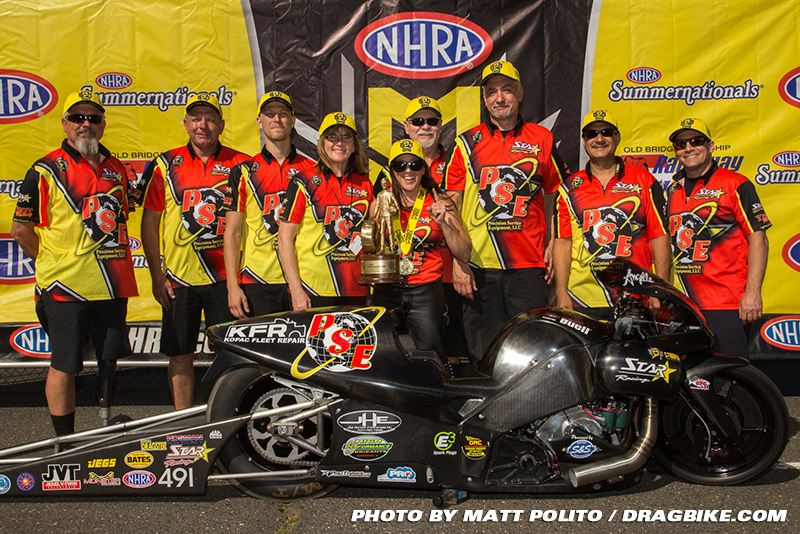 “I probably looked like a crazy person at the top end when I won,” Sampey said with happy tears streaming down her face. “I told my crew chief to check everything on the bike because I was jumping up and down and punching it; I couldn’t calm myself down to take off my helmet. I know this is my 42nd win but it feels like my first ever. I don’t feel like I’ve had any wins before today.”

Taking the win at the 47th annual NHRA Summernationals was extremely special to the entire team but Sampey wanted nothing more than to win for her five-year-old daughter Ava who has yet to see her win.

“I’m telling you, she’s a tough critic,” Angelle laughed. “She’s going to see all of this on television and that’s why I get so emotional. When you have a little five-year-old calling you mommy and looking up to you, I feel responsible for showing her she can do anything she wants to and I didn’t want to come back to racing and show her that I couldn’t do it. This win means the world to me.”

Sampey collected a total of four bonus points in qualifying. Combined with her win today, Sampey jumps to the No. 3 spot in the NHRA Pro Stock Motorocycle standings. The next event for the Pro Stock Motorcycle class will be at the Summit Racing Equipment NHRA Nationals in Norwalk, Ohio on June 23-26th, 2016.