his weekend’s Desert Nationals at Alice Springs Dragway will have plenty to entertain the fans of all things on two-wheels, including racing from Modified Bike and nitro-fueled exhibition action from Top Fuel Motorcycle defending champion Chris Porter.

For Modified Bike racer and NT local Colin ‘Baldy’ Sainsbury, who has been racing since 1997, the Alice Springs venture follows quickly on from what he votes as a very pleasing adventure in Darwin.

“I had a fantastic weekend – we came out in Friday qualifying and ran a 9.219 second pass and we were happy with that straight off the trailer. We had done a lot of changes and prep work in the lead-up to the event, so to run so strong early was very pleasing,” said Sainsbury, who thanks supporters Hutchinson Builders, Alicross Motorcycle Engineering, Alice Poultry Supplies, Darwin River Diggers, Rogue Darwin, The Footy Tips Club and Centreforce Drag Racing.

“In the second run we laid down another 9.2, and we thought – well this is good, we are on the money, we are consistent, and things are going well. This was important as at my last event, which was my first event of the season, it wasn’t really that good of a day as I got dehydrated and ended up in the ambulance, so it was good to get back to where I should be. 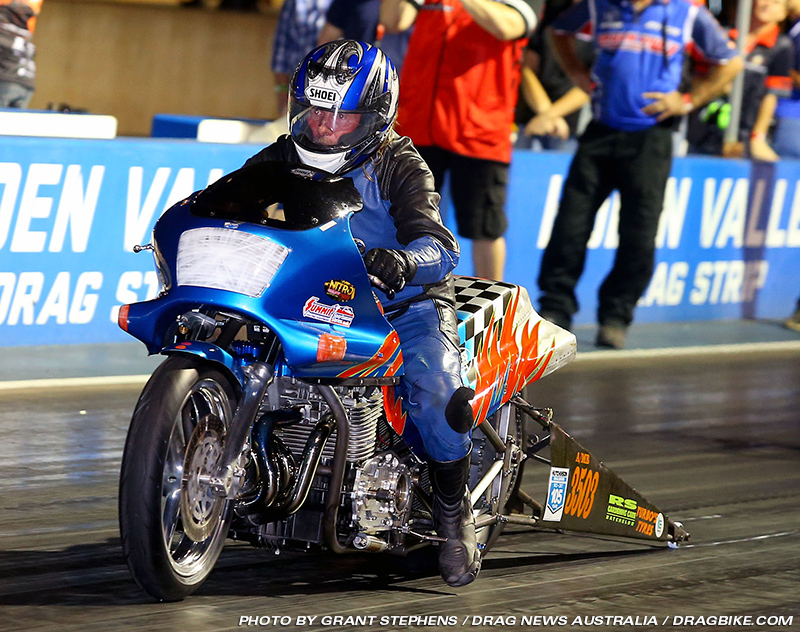 “In the third qualifying session I actually stalled it coming back from the burnout so I wasn’t able to run, as I use a remote starter and you have to start under your own power. But even so, after the two ‘9.2s’ I was happy, and I decided to use that as my dial-in.

“In the first round, I came out against Gordon Crawford, who I raced in the event last year and actually beat, so he came up to me and said ‘oh no, I have got you again,’” laughed Sainsbury, who has a number of Hidden Valley Modified Bike track championships and runner-up results to his name. “I think he got anxious and he red-lit, and I ended up having a fantastic run with a 9.209s pass on a 9.20s dial-in – I was on target and we were going really well.

“In round two I faced up against local Mark Tattingham who is very hard to beat. We did a lot of work to prepare and we dialled in at a 9.2s, but we should have changed it to 9.0s. Long story short, I broke out (crossed the line faster than the dial-in). But the good side of it is that I ran a personal best – 9.053 seconds at 151 miles per hour, and one of my best times to the 60 foot mark.

“I could have backed off at the end but no, I kept going, and it was fantastic. It was just a perfect run and exactly what I was asking for – I am actually aiming for the eight second zone. While we might not have taken the win, we are on target and when I get to Alice Springs I am going to try and crack that eight second marker!

“When it comes to drag racing – I just love it. It is very addictive. I am very keen to get to Alice Springs, especially now they are running the quarter-mile distance again.”

Also set to light up the Alice Springs Dragway this weekend on two-wheels will be Top Fuel Motorcycle defending champion Chris Porter, who heads to the Desert Nationals following an up and down weekend in Darwin.

Porter will put on an exhibition show during the Sunday of the event, aboard his popular Bad Bones Nitro Harley Top Fuel Motorcycle.

The exhibition pass follows an up and down weekend for the Sydney-sider.

“The weekend was good and not so good, because I set a new Personal Best, but I went out in the second round of eliminations,” explained Porter, who thanks Fraser Motorcycles, Interfreight Transport and Duncan Foster engineering for their support. 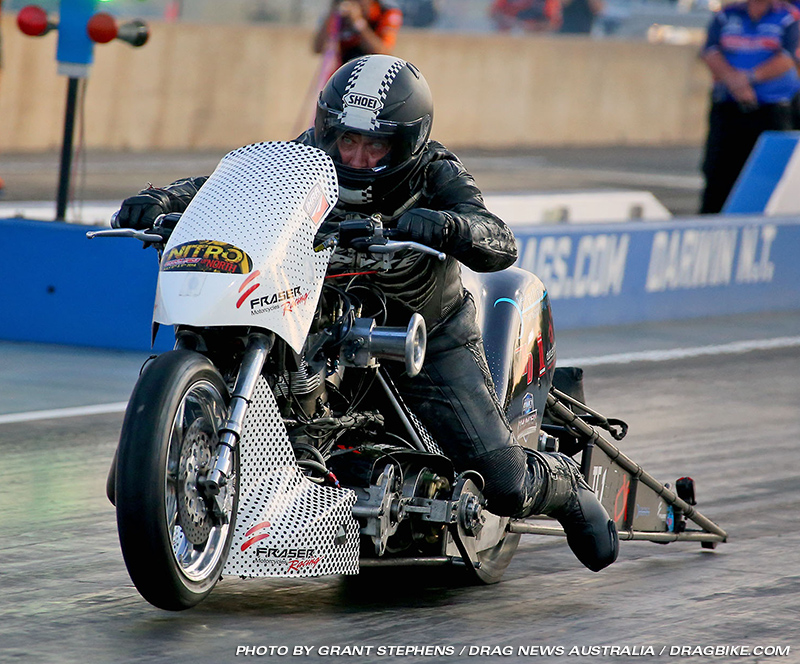 “The personal best was the best mile per hour we have ever done anywhere, at 226 miles per hour. We were pretty happy with that.

“I think also that the pass with Mark Drew was one of the fastest side-by-side Top Fuel Motorcycle passes for the country in terms of miles per hour, so that is pretty exciting also.

“With not making the final and given the fact that I am driving past Alice Springs Dragway on my way home, it just makes sense to stop by and put on a show for the fans.

“I have never been to Alice Springs and I have two weeks to get home, so I am really keen to get there and see what the place is like, and hopefully put some smiles on the fans’ faces with some nitro bike action, and help promote the sport as much as I can.

“The crowd in Darwin was absolutely killer, it always is up here, and I am hoping Alice Springs will be just as packed.

“It was a great event and Scott MacLean put on a great show, the track was good, and everyone was looked after really well. While I have never been to Alice Springs, I am expecting it will be a great event and I can’t wait to see what we can do.

“Having said that, I have absolutely no idea what to expect as they have done a big upgrade at the track, so we will watch what the Top Doorslammers and hopefully we can run a good number – maybe we can even go after the track record!