Lucas Oil Pro Stock Motorcycle racer Hector Arana Sr. often wears a smile on his face, as no one enjoys racing in the NHRA Mello Yello Drag Racing Series as much as the 2009 series champion.

But his smile was especially bright during the NHRA Toyota Nationals this weekend at The Strip at Las Vegas Motor Speedway, as his Lucas Oil Buell has performed about as well as it has all season.

Arana Sr. qualified No. 6, his best performance since the second race of the season in Charlotte, where he was also No. 6. His pass of 6.974 seconds at 192.06 mph came in the third qualifying session, on Saturday, and will put him against No. 11 qualifier Angie Smith in final eliminations.

“I’m feeling great going into tomorrow,” Arana Sr. said with a smile. “Pretty much better than I have all this year.” 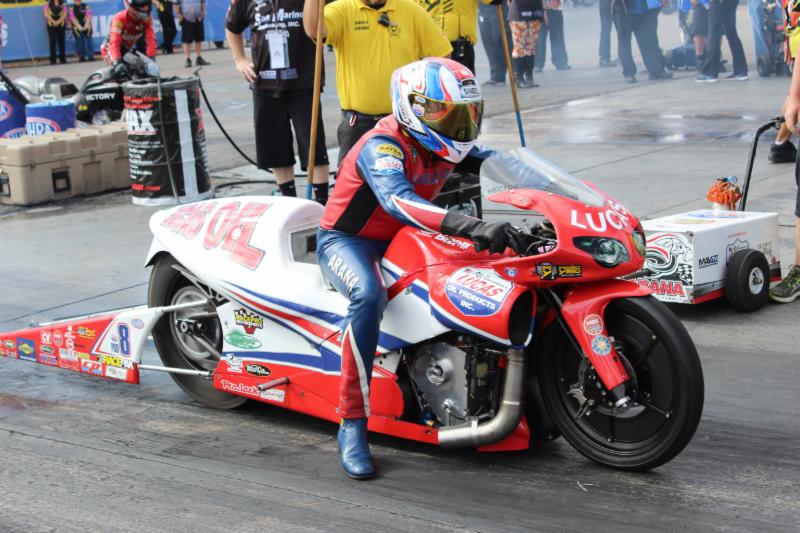 Arana Sr. was in the top seven in each of the first three qualifying sessions, showing speed and consistency with his Lucas Oil bike.

“We were consistent, and for Q4, I tried something different to see what it was going to do,” Arana Sr. said. “I needed to know either way, because that way we don’t have to worry about it tomorrow. Overall, I’m happy with the way we ran this weekend.”

It started with good runs in the first two qualifying sessions on Friday, where Arana Sr. was fourth and seventh, respectively. With a fast bike, Arana Sr. had the confidence to continue working to get better, knowing he had made a good start.

“Getting off to a fast start yesterday was definitely important,” Arana Sr. said. “It gives you an opportunity now to be able to be able to tune, improve a little bit and then try something a little out of the ordinary.”