As early as Friday afternoon, DME Racing showed that the Pingel Spring Nationals—opening round of the 2015 Mickey Thompson International Drag Bike League season—wasn’t going to be just another race. Two-time Orient Express Pro Street champion Joey Gladstone blazed the Maryland International Raceway quarter mile with a stunning 6.76 at an incredible 221 mph during Friday test and tune. 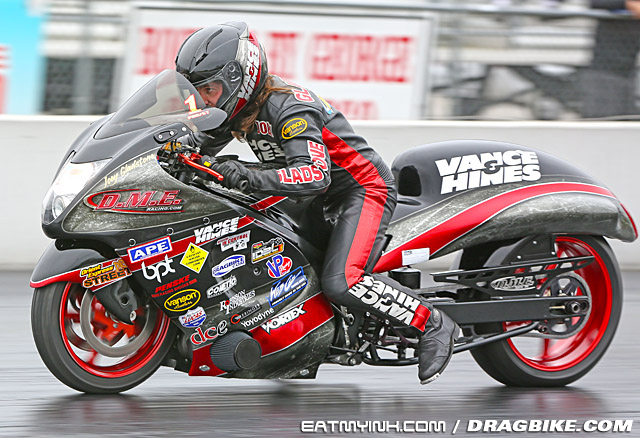 Gladstone and the DME team made that ET official with another .76 during Saturday qualifying and a 221 mph lap on Sunday. His Vance & Hines sponsored, turbocharged Suzuki Hayabusa (known as “Black Betty”) had gone wild! Black Betty went two steps further during eliminations, clicking off a .74 and the new record of 6.720 on the way to meeting DME Racing teammate Terence Angela in the final. 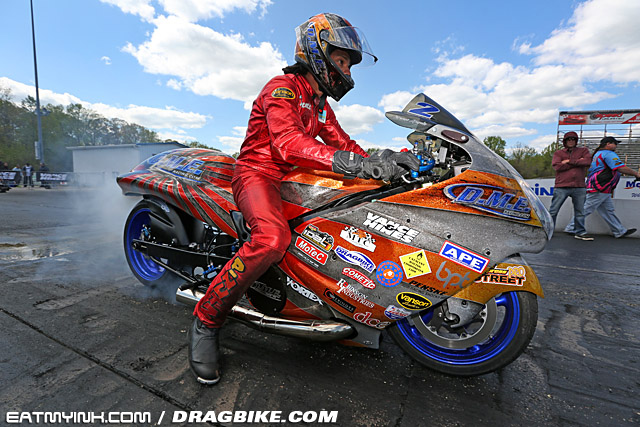 Sadly for Gladstone, Black Betty had had enough and wouldn’t start for the final— victim of a broken cam chain. He and the DME team took the misfortune in stride and celebrated the win for Angela, who struggled early in the weekend but made consistent gains in performance and confidence. Angela is now the fourth Pro Street racer to officially run a 6.80something, running 6.86 at 216 in the semis.