This builds on the team’s previous success leveraging the S1000 RR platform, having set five world and national records at their last Bonneville land speed racing event and setting a Guinness World Record Book record for two people simultaneously on a motorcycle at 181.426MPH. 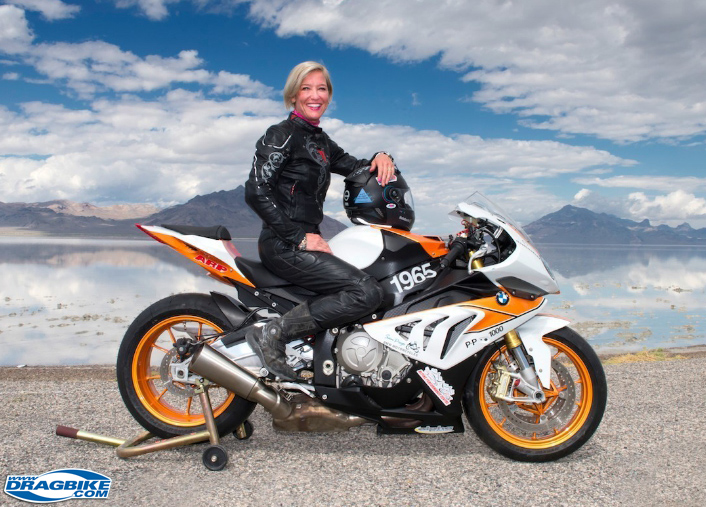 Gary Orr, owner of San Diego BMW Motorcycles said, “After our success on salt at the Bonneville Motorcycle Speed Trials, we were looking forward to seeing how our bike would perform at the Mojave Mile standing-start event. We couldn’t be happier with the results, particularly given the bike is prepared to SCTA production regulations, and we are very excited for the rest of the 2016 race season.”

Added Sills, “The S1000 RR is an incredibly confidence-inspiring machine, performing extremely well on the race surface of the Mojave standing mile event. Despite considerable gusting side winds for a number of race passes, the BMW felt very planted throughout the weekend, allowing us to get full power to the ground and accomplish such an incredible top speed.”

Hunter Sills Racing is a female-owned professional land speed racing team including race technician and motor builder Shane Kinderis of Alpine Performance Centre, Gary Orr of San Diego BMW Motorcycles, race mechanic Curtice Thom and riders Erin Sills and the late Andy Sills. Together the team has earned 24 World and National records, 2 Guinness World Book records, Mojave Mile 200 MPH Club membership, Mojave Magnum 200 MPH Club membership, BUB 201 MPH Club membership, SCTA 200 MPH Club membership, top speed to-date of 236 MPH, and title of World’s Fastest BMW. Erin Sills has been named 2013 Advertising Age Woman To Watch, 2014 American Motorcyclist Association Female Athlete of the Year, 2014 University of Cincinnati Lindner College of Business Distinguished Alumni and is an executive with Facebook, Inc. A frequent speaker on behalf of the land speed racing, Sills also serves on the board of directors for the Save The Salt Foundation and is the founder of the sheEmoto Scholarship for females in the sport.

San Diego BMW Motorcycles is San Diego’s premier motorcycle dealer and one of the largest volume BMW dealerships in the U.S. Enthusiasts serving Enthusiasts in the sport of motorcycle racing.

Hunter Sills Racing would like to thank their generous sponsors: