The highly anticipated supercharged production sportbike will arrive in dealerships for collection by excited customers.

It’s been one of the most talked about bikes in decades, and the 2015 Kawasaki Ninja H2™ motorcycles will be in the hands of eager customers at last. As a result, enthusiasts can soon expect to see owners making their first excursions on public roads, allowing these astonishing motorcycles to be seen in action.

Unveiled in Europe last fall, orders for the Ninja H2, and its track-only counterpart Ninja H2™R, were taken in December 2014. The bikes are built to order in a special facility at Kawasaki Heavy Industries, Ltd in Japan. With the first production run completed, the bikes have been shipped to the network of nearly 1000 Kawasaki Motor Corp., U.S.A. dealers across the country to be collected by very fortunate customers. 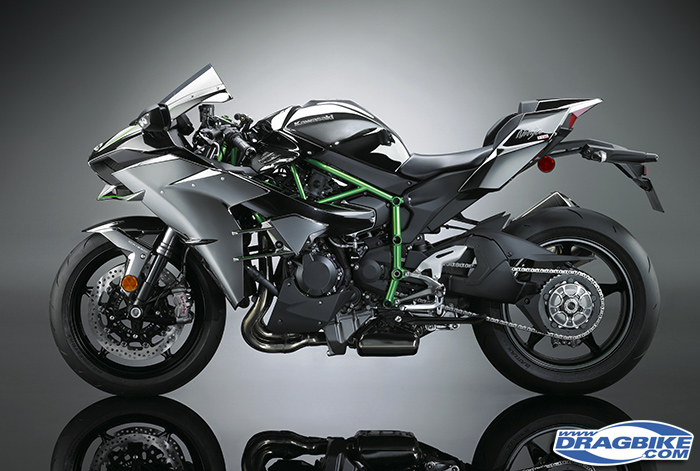 Deliveries of the Ninja H2R motorcycles will begin in April 2015 as scheduled, giving dealers time to collect additional parts such as the paddock stands to be supplied with the slick-shod Ninja H2R track bike.

Devised, developed and built in-house by Kawasaki, the Ninja H2 sportbike and Ninja H2R hyperbike are redefining the standards in motorcycle performance.

As a result, both the Ninja H2 and Ninja H2R have become Internet sensations, with online stories and videos being enjoyed by huge audiences. A video taken at the motorcycle’s US launch at AIMExpo™, for example, has been seen by more than ten million people, illustrating the anticipation surrounding the supercharged Kawasaki sportbikes.

Motorcycle gatherings around the country will soon witness the arrival of a new hometown hero, when the first owners arrive on their Ninja H2 motorcycles.

Kawasaki Heavy Industries Ltd. (KHI) started full-scale production of motorcycles over a half century ago. The first Kawasaki motorcycle engine was designed based on technical know-how garnered from the development and production of aircraft engines, and our entry into the motorcycle industry was driven by Kawasaki’s constant effort to develop new technologies. Numerous new Kawasaki models introduced over the years have helped shape the market, and in the process have created enduring legends based on their unique engineering, speed, power, design and riding pleasure. In the future, Kawasaki’s commitment to maintaining and furthering these strengths will surely give birth to new legends.

Kawasaki Motors Corp., U.S.A. (KMC) markets and distributes Kawasaki motorcycles, ATVs, side x sides, and Jet Ski® watercraft through a network of almost 1,200 independent retailers, with close to an additional 7,400 retailers specializing in general purpose engines. KMC and its affiliates employ nearly 3,100 people in the United States, with approximately 300 of them located at KMC’s Irvine, California headquarters.