The Sportsman Motorcycle Series Presented by Harley Davidson stormed up the mountain to Bandimere Speedway this past weekend for Thunder on the Mountain. This was race 3 of 6 for the Lucas Oil Drag Racing Series. The event schedule was 2 qualifying passes on Friday and another 2 on Saturday with Eliminations starting Sunday.

Friday came and racers began to set up to go for the number 1 qualifying spot and get data to use for their dial in. Qualifying is based on reaction time in this class and at the end of day 1 Leland Sykes was holding the Top Spot with a .002 reaction time. Day 2 of qualifying came and it was another beautiful day with sunshine and mid 90 degree temperatures. Most of the riders seemed happy with their qualifying runs but it was Mike Voss who had the biggest smile going .001 for the #1 spot. Mike was also the defending event champion looking to go for back to back wins in Denver.

Sunday began and the weather was proving to be typical for the Denver, CO area and that is anything but easy. The wind and corrected altitude can and will change in an instant. Kyle Olson would prove to be on top of his game taking home the win but the path there would involve a little luck. Kyle was .005 on the tree in the first 2 rounds of competition. In the 3rd round however he had some problems with his delay box that caused him to have an unusual .631 reaction time. This is where the luck comes in as his opponent lifted off the throttle a little too late and broke out turning on the win light for Kyle.

In the semifinals Kyle would race Rudy Fife who in the 3rd round had a bye run but broke a transmission shaft. Rudy still staged the bike and pushed it through the beams but when Kyle had a green light Rudy could do nothing but watch him do the smart thing and click it off early as to not risk breaking out and coasting to the win light. In the final round Kyle would face Cameron Belisle. In the Final Cam had the starting line advantage with a .018 light to Kyle’s .031 but Cam took a little too much stripe and broke out by .001 while Kyle ran a winning time of 9.470 on his 9.46 dial in.
“Well today I won! It is the best weekend by far to win when a lot of my family is out here in Denver with me. It’s just as special it being father’s day and my kids are with me and my grandpa and my dad, it really puts a lot more meaning to it. It was a hard fought day, had some weird stuff happen in the third round. and Rudy was broke in the 4th rd. so I had to make sure I was green and didn’t break out, but it all worked out in the final. You can’t get much closer but I knew I was a little late on the tree so I had to work it on the top end right. I can’t thank my wife, kids, mom and dad, grandpa, grandma, Deb, Diane, Doug, Andy, and all of my friends at the track for the well wishes and congratulations.” Kyle Olson said of his win today atop the mountain. 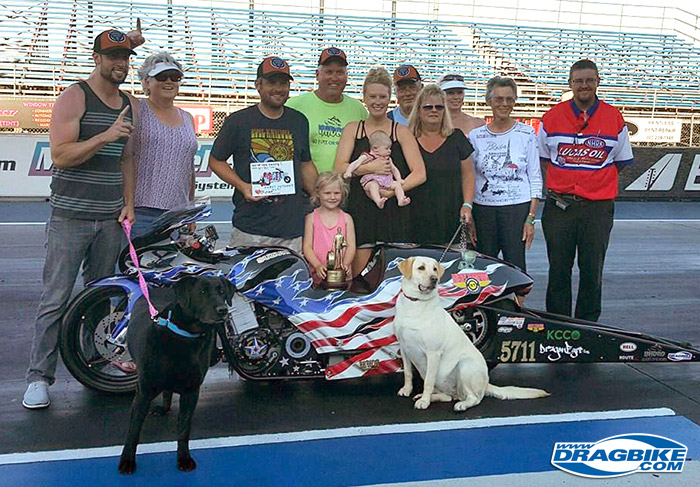 Kyle would also like to thank his loyal sponsors, Dragon Fyre Inc., Bell Powersports, Mickey Thompson Tires, Fenders Cycle, APE, and MWR Designs, I couldn’t be out here without all the help!!!

The next stop for the Division 5 Sportsman Motorcycles will be a Double Header in Topeka, KS August 13th – August 16th. This is sure to be a big event with huge points implications. Several riders will be looking to take out current points leader Cameron Belisle early and make up ground in their quest for the Division 5 Sportsman Motorcycle season championship.