Australia’s quickest man on two wheels, Chris Matheson and his Team have been testing his Nitro Voodoo Top Fuel Motorcycle, in readiness for the first round of the IHRA Season opener.

Matheson said “the 400 East Coast Thunder Series ‘The Nationals’ in Sydney in a couple of weeks, will be our first chance to test our theories on a good track”.

We have won the Australian Nationals three times in the past and would love to win a fourth. We are constantly developing the bike, improving the combination in our quest to run quicker. We spent all of last season testing our new Voodoo engines, which withstood the entire season of punishment, some 60 passes, without any problems, unbelievable for a Nitro engine.

We struggled with our clutch combination throughout last season, however, pre-season testing has helped unlock the secrets to our engine improvements. Last season we ran a best of 6.14 at the Winternationals, which is a tenth off our Australian National record of 6.04.

We were happy with the result, considering we haven’t explored the bikes full potential as yet.
Despite the inconsistent results during last year, we ended up third in both the ANDRA and the
IHRA 400 Thunder Series and posted the quickest pass in Australia for the season by more
than two tenths. 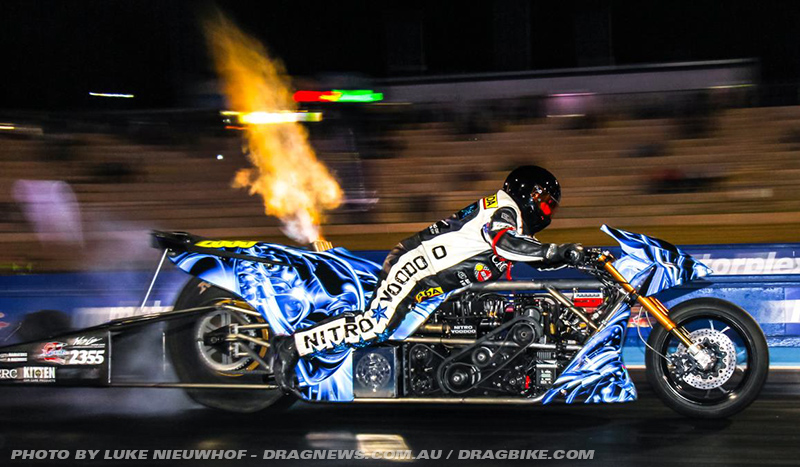 The new engines are more powerful, more reliable and much more maintenance friendly, giving
us more time between rounds to concentrate on our tune for the next pass. We have been
experimenting with gear ratios in the off season, to help get the bike down the track without detuning
the motor or to slow it down. The whole idea of going to an improved power plant is to
go quicker, not to “dog it up”, just to get down the track.

Sydney Dragway is one of my favourite tracks, we have run a number of 6.0’s there and have
held the Track Record for a number of years 6.07. I have also had a couple of dismounts there
over the years, which still hurt first thing in the morning, or maybe that’s just old age.
Regardless, it is a great track, great spectator crowds and we will step it up to put on a good
show.

Matheson went on to say “it’s exciting times for Top Fuel Motorcycles in Australia, as we start to
see eager new comers entering the sport to raise the bar”.

The Sydney Dragway event “The Nationals” will be held over Friday 4th and Saturday 5th
November 2016.