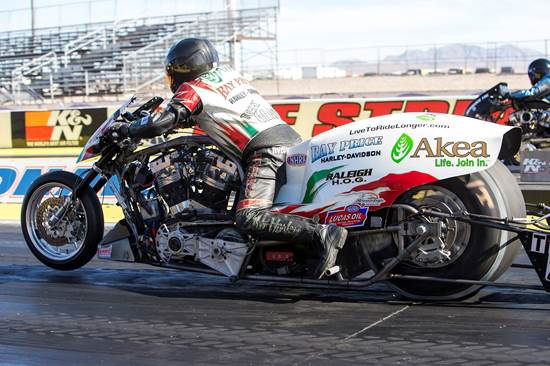 The 2015 NHRA Winternationals in Pomona, CA was the first event of the season for Ray Price Racing. Going into race day, defending Top Fuel Harley Champion, Tommy Grimes led the pack as the #1 qualifier.

“We ran well on the first pass. We went a little light, because you want to make it in the show right away. We ran a 6.35 elapsed time which was good,” said team owner, Ray Price. “The next few passes allow you to play with different things and make changes and that’s what we did. In the second session we stepped things up and ran a 6.30.”

Price and his team were looking forward to running even faster in the third qualifying session, but Mother Nature had other plans.

“On the last pass we were really hoping to do a good number. We had read the track really well and understood and what conditions were like. But then it rained and we didn’t get the chance.”

Grimes had the Low E.T. of the event with a 6.302 and also the Top Speed of the event going 229.27 mph. Grimes faced #6 qualifier, Joey Sternotti, in round one of eliminations. Unfortunately, race day ended early after Grimes fouled out with a red light start.

Price went on to add, “The team did a marvelous job overall; they really did a great tuning job. We set a goal and ran faster than we thought we would.”

The next race in the Top Fuel Harley Series is March 20-22 at No Problem Raceway in Belle Rose, Louisiana.