LAT Racing Oils will be powering the Top Fuel Harley team of Ray Price Racing for the 2015 NHRA Harley-Davidson Drag Racing Series.  LAT is involved in many different types of motorsports including NHRA championship drag racing teams in Sportsman and professional classes, and can now add Top Fuel Harley.

Team owner of the 2014 NHRA Harley-Davidson Drag Racing Series defending champion, Ray Price, has been researching LAT Racing Oils for months and has heard a lot of good things from team’s currently using the products in their competition vehicles.  Price’s team tested LAT Racing Oils at a recent NHRA Harley-Davidson Drag Racing Series event in Belle Rose, LA and won the race.   “We obviously liked the results we achieved from using LAT Racing Oils in our Top Fuel Harley at the race in Louisiana”, stated Ray.  Our team is committed to winning the Championship again this season and we feel that LAT Racing Oils helps gives us a great chance to accomplish that through increased performance.

Ray Price Racing is running 50wt oil from LAT in their Top Fuel Harley, since it is specifically designed for nitro engines. It combines a special blend of base oils and additives developed to meet and exceed the tortuous conditions common of Nitro Methane and Alcohol burning engines. 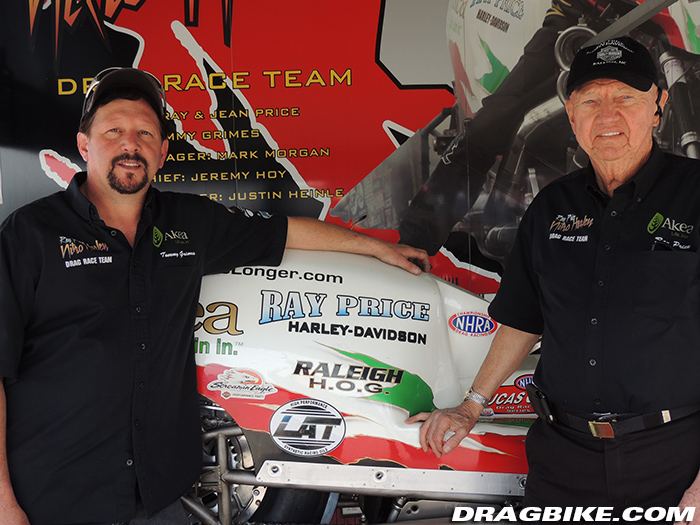 Danny Vaca, owner of LAT Racing Oil, has been paying attention to Price’s team for a while now, and specifically wanted the chance to work with their team due to the Championhip caliber atmosphere.  “Everyone who has ever been involved in Top Fuel Harley racing knows Ray Price, and watches what products his team uses to increase their performance.  Ray is an influencer not only in his class, but in the overall sport of NHRA Championship Drag Racing.

In addition to the race team running LAT Oils, Ray Price Harley-Davidson in Raleigh, NC will also begin carrying LAT Racing Oils for customers wanting their popular products for street bikes.  Price’s dealership is one of the top Harley-Davidson dealers in the country, and one of the Top 100 dealers for all motorcycle brands in U.S.