Staying true to their goal of qualifying both PSE/Team Liberty Racing Victory Magnums are every event this season, Team Liberty’s Cory Reed and Angelle Sampey will compete for top honors on race day at the 20th annual Children of Fallen Patriots NHRA Route 66 Nationals presented by K&N. 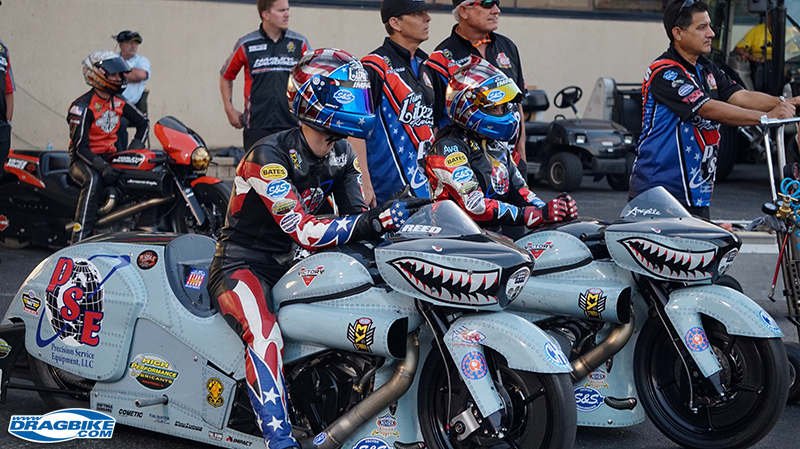 “The streak of getting both of our PSE/Team Liberty Racing Victory Magnums qualified is still alive,” Reed said. “Round one of qualifying was really great and then the rest of them weren’t spectacular. It’s nice coming off the trailer and going fast but we’ve been trying some new stuff to change it up and see what this new bike likes.”

“We’re using Cory’s bike as the test bike,” Sampey said. “We don’t have a dyno so the only time we can see if anything works is here at the races or if we go testing. We know we may suffer a little bit if we go the wrong direction but we’re willing to do that to learn. Our whole team is willing to learn and make this benefit us in the long run.”

No. 16 Reed will take on No. 1 LE Tonglet and teammate No. 15 Sampey will take on No. 2 Hector Arana Jr. in the first round of eliminations tomorrow. Pre-race ceremonies at the 20th annual Children of Fallen Patriots NHRA Route 66 Nationals presented by K&N will begin at 11:00 a.m. and eliminations will begin shortly after at noon on Sunday, July 9th.