It would be an easy hit for me to say Sam Wills is a Top Fuel motorcycle drag racing legend, he certainly is. But I think Sam would be a bit uncomfortable with the title “legend.” He’s a quiet man who walks softly and carries a big stick, he likes it that way. Sam is neither brash nor loud, he saves that for the motorcycles he builds from scratch and races: T/F bikes.

Sam Wills was born in January, 1955, in Roanoke, Va. As a young man, yes he was fascinated in all things mechanical and fell in love with motorcycles. At age 17, in September of 1972 when Kawasaki released the Z1 into the USA Market, Sam bought the first Z1 available at Beach, Kawasaki, in Jacksonville, Florida. Sam became fast friends with the Parts Manger, Bo O’Brachta. They started hanging out, riding motorcycles together and soon started going to drag races with their new Z1 motorcycles. They started out bracket racing at Gainesville and Jacksonville Florida race tracks. 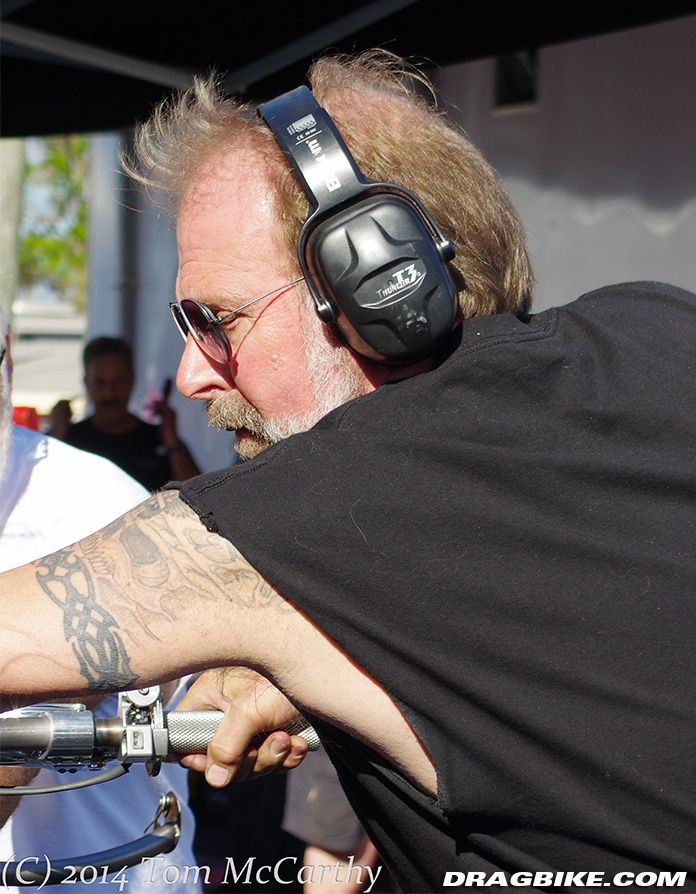 In 1973, Bo ordered a drag racing chassis from Kosman Specialties, and Sam acquired a Chapman chassis that he modified to accept his Kawasaki Z1 engine. They then became serious about their motorcycle drag racing efforts as the 1973 season unfolded. The first national event they entered together was at Warner Robbins, Georgia , in 1973.

While attending national event drag races hosted by the AMDRA, Sam & Bo met many national level people of importance whom they impressed. One of them was a motorcycle parts manufacturer named Ken Tippton who owned and operated a shop in southern California. The business was MTC Pistons. 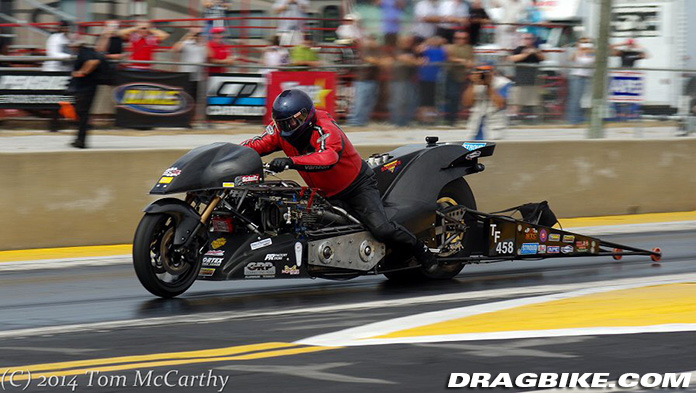 In the mid 1970’s, Bo, who started hanging out at MTC in California, where MTC first started their business enterprise, was invited by Ken Tippton who owned & operated MTC to go work at MTC, as well as race for MTC. Sam kinda tagged along and soon they were working and racing out of MTC. But Sam broke off and went to work for a chopper shop known as D&K. The K in D&K was Willie Kingston, but Sam could not recall who the letter D pertained to. D&K serviced and modified motorcycles of all types in down town Los Angeles, California.

While working at D&K, Sam was welding and fabricating chassis while building custom bikes. In his spare time, Sam started building a motorcycle dragster chassis for himself. When his time came to part ways with his employer, Sam’s chassis came with him. From this he constructed an A/G (class A dragster, gasoline powered) Kawasaki to run in Super Eliminator class.

While running in S/E Sam met and impressed a racer who was also a shop owner from the great state of Oklahoma, known widely as Big Carl Ahlfeldt. Carl was a master machinist with a penchant for extreme performance motorcycles and Carl’s forte was also sanitary construction of assembled machines that when finished looked as fast as they performed. Big Carl bonded well with Sam Wills and in early 1977, Sam went to work with Carl Ahlfeldt at MCU, (Motor Cycles Unlimited) in Oklahoma. But Sam operated as in independent contractor with his own enterprise he named “Racing Innovations.” They worked in the same building, but Sam was doing his own thing in concert with Carl Ahlfeldt’s operation right next door. 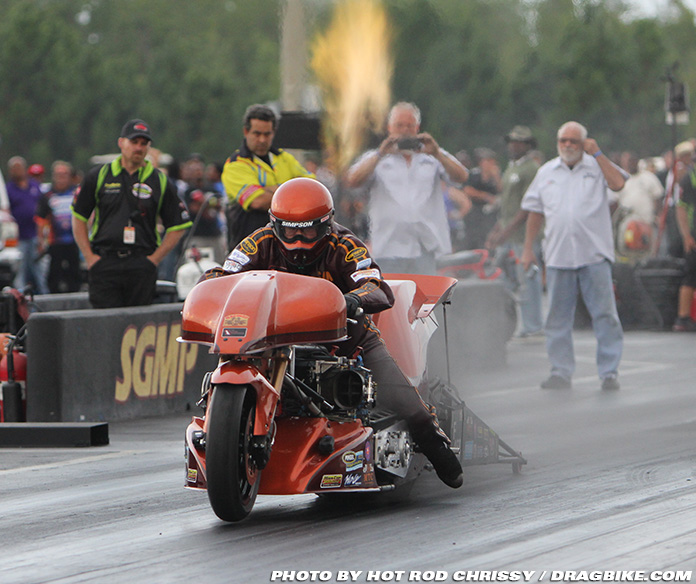 When Sam was wandering in and out of Motor Cycles Unlimited, he noticed Big Carl had a 750cc Honda motor sitting in the shop that had a Hilborn fuel injection system installed on it. The motor was stagnant as a spare parts engine, so Sam asked Carl if he could adapt the injection system to his Kawasaki dragster and change over from gasoline power to nitromethane injected fuel racing. Shortly there after, Sam cut the spacer bars off the injectors to set the bore spacing for a 900cc Kawasaki head, then Sam and Carl machined up whatever they needed to install the Kinsler injectors to Sam’s 1170cc Kawasaki dragster. The results were better than they hoped for.

Their creation became a B/F (Class B dragster, fuel burning) machine with a stock clutch set up into a stock transmission that produced a stunning 8.48, at 168.60 mph! In 1976 Sam started kicking everyone’s butt from coast to coast with his fuel injected nitromethane burning Kawasaki. This raised a lot of eye brows, one pair of which was owned by an entrepreneur who owned a trucking company that wanted to go drag racing, his name was Mike Gray. 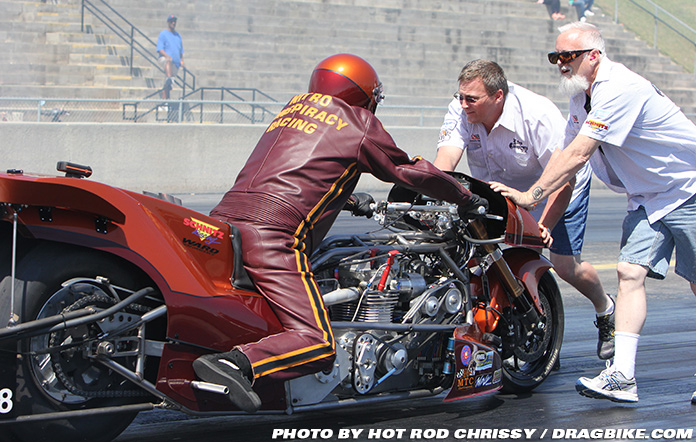 In January, of 1977 Mike Gray purchased Sam’s injected fuel bike with the expressed intent of evolving the motorcycle into a Top Fuel bike. Sam packed up the bike in his van and drove it to Florida to personally deliver the machine. On his way to Saint Petersburg, Florida, to the Terminal Van Lines facility, he picked up his old buddy Bo O’Brachta along the way to help him deliver the bike.

Prior to the 1976, season Bo had drifted back to his home in the Sunshine state and was still involved with motorcycle drag racing both as a racer as well as assisting his buddies with their race bikes. O’Brachta had a reputation as a throttle jockey who was never shy about holding a throttle wide open to it’s stopping point while racing. For Bo a throttle had only two positions: closed or wide full open. 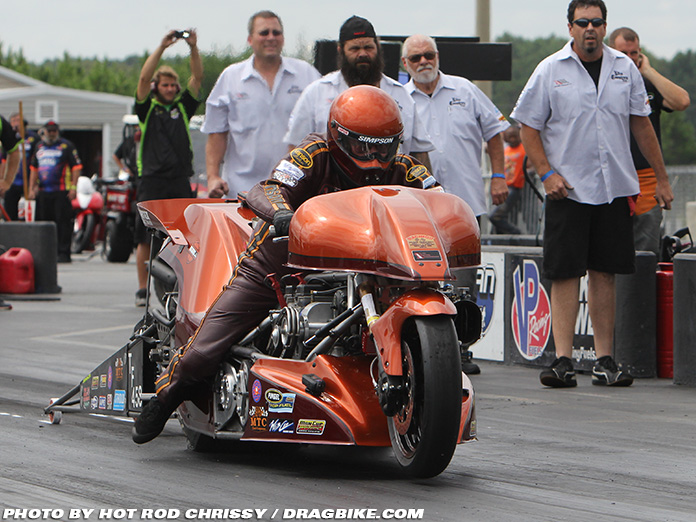 Sam returned to Oklahoma City and his Racing innovations shop, and for the next 37 years proceeded to produce Top Fuel bike chassis and complete turn key race bikes. Over the years he’s made T/F bikes ridden by some of the biggest and baddest Top Fuel bike racers in the world; Chris Hand, Carl Ahlfeldt, Frog Thacker, Larry McBride, Andy Gotsis, Brian Johnson of the UK, and many, many more. Sam’s greatest historical legacy is his vital, pivotal role in the creation and restoration of the world famous Terminal Van Lines bike. In as much as Sam was the original creator of the bike, when Mike Murdoch and Mike Gray wanted the bike restored after it’s demise in 1983/84, it was Sam they called on to put the bike back together and that’s the bike fans see today when they enter Don Garlits drag racing museum.

Sam as a racer has been a fuel bike pilot since 1975-76. Since he started stomping people in Super Eliminator back when cubic inches, number of cylinders and weight determined classes, Sam has had many notable moments in drag bike racing history. Like when he got his first 200mph time slip at the US Nationals in 1983.

Sam was driving the resurrected TVL bike at the time and Sam stopped the clock’s at Indy during the US Nationals with a 7.34 @ 208.81mph that raised a lot of eyebrows. . Without any previous runs at or near this MPH, this caused the NHRA to immediately investigate the details of the pass.

NHRA officials questioned the NMRA Tech director, Jim Harris the director of the NMRA, and they looked at all aspects of the run by all means at hand. After a review of the matter the NHRA invalidated Sam Wills run. In the September 30th edition of the NHRA’s news paper, “National Dragster” the NHRA’s official position on the matter was, “It was later determined that the front wheel of the bike did not trip the first MPH timing light and the speed was voided.” Therefore Sam’s next best numbers of 7.44 @ 181 stood as his official qualifying numbers. The following year at Indy, in 1984, Sam won the prestigious NHRA US Nationals for Top Fuel bike with a blistering 7.03, the world’s quickest pass on a T/F bike at that time.

Sam’s work as a chassis and bike builder has not been confined to fuel bikes alone. He’s welded on countless choppers, bobbers, and sportsman race bikes of all sizes and shapes. He’s made frames for biker build offs and maintained his shop Racing Innovations for close to four decades now. Need a rear axle out of Titanium or something one off, look him up.

Sam’s latest creation, the Nitro Conspiracy bike he’s created with Mike Dryden, is simply Sam’s latest rendition of a T/F motorcycle with thirty-seven years of experience poured into building it. At the MANCUP World Finals in 2013 when the bike was brand spank’n new and Sam only had a dozen or so runs on the bike, he remarked to me, “We’re getting there with the new bike, it just takes a while. We’ll get it into the five’s but if it don’t happen this weekend, it won’t Hair-Lip the Pope, ya know what I mean?”

That statement is so Sam Wills. He loves Top Fuel motorcycle drag racing more than words alone can describe. Most notable is Sam has fun, a real blast building and racing Top Fuel bikes. He’s all business when he’s in leathers, but if you’re in his pit area when he’s getting the bike ready or after the race, he’s all smiles, Mike Dryden is too. “When we stop having fun, that’s when I’ll stop racing.”

A wise man once wrote “if you do what you love, and love what you do, you’ll never have to work another day in your life.” Sam’s efforts in T/F bike typify that thought process. When racers and fans enter Sam’s pit area on race weekends, you can see this in person. So stop on by for an autograph, look for the Nitro Conspiracy team, ask for Sam Wills. He’s built and ridden more Top Fuel bikes than most people have seen in a life time. Be sure to thank him for all his contributories to these magnificent machines and the men who race them.