HomeTeam ReportsVickers Takes the Pro Fuel Class Back to School

Vickers Takes the Pro Fuel Class Back to School

DERRINGERS TAKE NFB AND P/F CHAMPIONSHIPS AT THE ROCK

It was a busy and exciting weekend for Hawaya Racing this past weekend at the Jim McClure Nitro Nationals held in Rockingham NC. 12 Pro Fuelers showed up to do battle for the title of the AMRA National Finals Champion. The weather was outstanding and optimism was in the air about it being a record setting weekend. In qualifying, Kirby Apathy ran a 7.28 second run to take the #1 spot. Johnny Vickers sporting the Gen-4 upgrade in the Terminater bike ran 7.42 seconds to take the #4 spot. The Dream Chaser team of Buddy and Janette qualified #3 with a 7.35 ET, Tyler Wilson qualified in the #5 spot with a 7.48. In round one, Vickers ran a 7.242 to take out John McConnell, in round two, Johnny had to take on team mate and NHRA Pro Fuel Champion Janette Thornley running a 7.208 for the win. Round three was to be the best round of eliminations as the 5 time champ had to take on the #1 qualifier Kirby Apathy. Vickers got a couple of hundredths at the tree and went on to run another 7.22 pass against Kirby’s 7.24 to get the win. On the other side of the ladder, Tyler Wilson was on his own mission, taking out all competitors to wind up in the opposite lane to Vickers. In the final run of the day, Tyler got the hole shot but could not hold off the Terminator with Vickers again running in the 7.20’s. Final times were 7.25 for Vickers and 7.53 for Wilson. 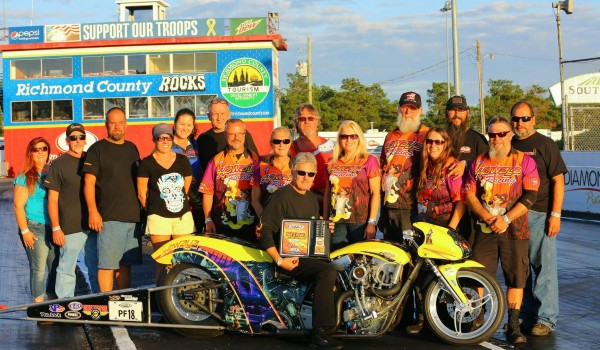 In Nitro Funny Bike, Rich Vreeland and Billy Jackson, both on HRP built Derringer powered machines were in a points battle for the AMRA Nitro Funny Bike Championship. As luck would have it, they qualified #4 & #5 putting them against each other in the first round. Steve Vickers was turning the screws and Billy was riding well, so fate was in their hands. In the first round, these two paired up and it was Billy Jackson who came out on top. Rich’s Championship was now in the hands of his competitor. Billy would face the #1 qualifier Jack Romine in the second round and would have to advance if he was going to have a chance to be the Champ, but it was not to be as Jack got the win light, handing the Championship to Rich Vreeland.

“It was a very good weekend all the way around this past weekend for HRP says President Johnny Vickers. The Gen-4 upgrade package that Janette and I are running are working well. I had gone into this event with a couple of new things to try, hoping that the weather was going to be outstanding, but was not to be as it was much warmer than predicted. I took a shot at it in Q1, but smoked the pistons on that run, so I just went back to what I knew and focused on wining the event. I will be running the NHRA event at Rockingham in two weeks and we will see if the weather will cooperate. Congratulations to Rich Vreeland on his NFB Championship and Rocky Jackson on his Pro Fuel Championship in the AMRA for 2016.