Hawaya Racing Team headed to No Problem Raceway, in Louisiana this past weekend, for the NHRA Lucas Oil Screamin Eagle Harley Davidson Series race presented by Harley Davidson Motor Company. Johnny Vickers in the first NHRA event for the Pro Fuelers this year, was again riding the Terminater bike. 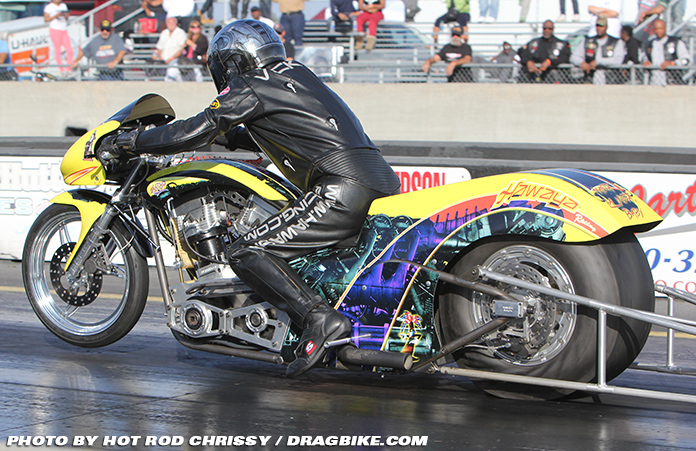 In Friday qualifying, Vickers qualified in the #1 spot with a 7.147 second run at 174.28 MPH. Track conditions were marginal and tire spin had been an issue for teams throughout the day. The water content was high all weekend as well, averaging above 100 grains. This sent the corrected altitude to over 2000 feet for most of the weekend. When Vickers launched, the Terminator hooked hard initially, but then spun momentarily before hooking again and propelling Vickers to the #1 spot.

The NHRA made the decision on Saturday to accelerate the program due to weather concerns on Sunday. This meant that final qualifying and eliminations were going to be run on Saturday. At the end of a long day, Vickers took the win over Dennis Fisher, running 7.161 @ 178.10 to Dennis’s 7.334 @ 172.65 pass, backing up the new NHRA Pro Fuel Harley record. Vickers had the previous record at 7.25 seconds set last year at Cecil County, MD. NHRA officials did their usual, thorough inspection after the final round to verify the record.

“It was great to get the win and re-set the national record at my home track in front of our family and friends, says Johnny Vickers. It’s always a challenge when you are running at your home track. There are a lot of distractions and it’s sometimes hard to keep your focus, but the professionalism of the crew was evident, as the results show.”

The next event for the HRP team will be the NHRA Lucas Oil event in Dinwiddie, Virginia on April 24 & 25.

Team Hawaya would like to thank our sponsors for their continued support and commitment to the sport of Motorcycle Drag racing: